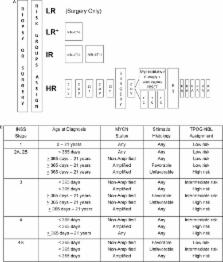 Revisions of the international criteria for neuroblastoma diagnosis, staging, and response to treatment.

V Castel,  R P Castelberry,  F Berthold … (1993)
Based on preliminary experience, there was a need for modifications and clarifications in the International Neuroblastoma Staging System (INSS) and International Neuroblastoma Response Criteria (INRC). In 1988, a proposal was made to establish an internationally accepted staging system for neuroblastoma, as well as consistent criteria for confirming the diagnosis and determining response to therapy (Brodeur GM, et al: J Clin Oncol 6:1874-1881, 1988). A meeting was held to review experience with the INSS and INRC and to revise or clarify the language and intent of the originally proposed criteria. Substantial changes included a redefinition of the midline, restrictions on age and bone marrow involvement for stage 4S, and the recommendation that meta-iodobenzylguanidine (MIBG) scanning be implemented for evaluating the extent of disease. Other modifications and clarifications of the INSS and INRC are presented. In addition, the criteria for the diagnosis of neuroblastoma were modified. Finally, proposals were made for the development of risk groups that incorporate both clinical and biologic features in the prediction of prognosis. The biologic features that were deemed important to evaluate prospectively included serum ferritin, neuron-specific enolase (NSE), and lactic dehydrogenase (LDH); tumor histology; tumor-cell DNA content; assessment of N-myc copy number; assessment of 1p deletion by cytogenetic or molecular methods; and TRK-A expression. Modifications of the INSS and INRC made at this conference are presented. In addition, proposals are made for future modifications in these criteria and for the development of International Neuroblastoma Risk Groups.

Katherine K Matthay,  C Patrick Reynolds,  Robert C. Seeger … (2009)
PURPOSE We assessed the long-term outcome of patients enrolled on CCG-3891, a high-risk neuroblastoma study in which patients were randomly assigned to undergo autologous purged bone marrow transplantation (ABMT) or to receive chemotherapy, and subsequent treatment with 13-cis-retinoic acid (cis-RA). PATIENTS AND METHODS Patients received the same induction chemotherapy, with random assignment (N = 379) to consolidation with myeloablative chemotherapy, total-body irradiation, and ABMT versus three cycles of intensive chemotherapy. Patients who completed consolidation without disease progression were randomly assigned to receive no further therapy or cis-RA for 6 months. Results The event-free survival (EFS) for patients randomly assigned to ABMT was significantly higher than those randomly assigned to chemotherapy; the 5-year EFS (mean +/- SE) was 30% +/- 4% versus 19% +/- 3%, respectively (P = .04). The 5-year EFS (42% +/- 5% v 31% +/- 5%) from the time of second random assignment was higher for cis-RA than for no further therapy, though it was not significant. Overall survival (OS) was significantly higher for each random assignment by a test of the log(-log(.)) transformation of the survival estimates at 5 years (P < .01). The 5-year OS from the second random assignment of patients who underwent both random assignments and who were assigned to ABMT/cis-RA was 59% +/- 8%; for ABMT/no cis-RA, it was 41% +/- 8% [corrected]; for continuing chemotherapy/cis-RA, it was 38% +/- 7%; and for chemotherapy/no cis-RA, it was 36% +/- 7%. Myeloablative therapy and autologous hematopoietic cell rescue result in significantly better 5-year EFS than nonmyeloablative chemo therapy; neither myeloablative therapy with [corrected] autologous hematopoietic cell rescue nor cis-RA given after consolidation therapy significantly improved OS.

Katherine K Matthay,  Inge Ambros,  R Gerbing … (1999)
The International Neuroblastoma Pathology Committee, which is comprised of six member pathologists, was convened with the objective of proposing a prognostically significant and biologically relevant classification based on morphologic features of neuroblastic tumors (NTs) (i.e., neuroblastoma, ganglioneuroblastoma, and ganglioneuroma). A total of 227 cases were reviewed. Consensus diagnoses from morphologic features (criteria described separately) based on five of six or six of six agreements by the reviewer pathologists were used for prognostic analysis. Prognostic effects of morphology, both individual and in combination, taken in conjunction with age (Shimada classification, histologic grade, and risk group), were analyzed. Approximately 99% of cases (224 of 227) had consensus diagnoses for categorization: neuroblastoma (Schwannian stroma-poor), 190 cases; ganglioneuroblastoma, intermixed (Schwannian stroma-rich), 5 cases; ganglioneuroma (Schwannian stroma-dominant) maturing, 1 case; ganglioneuroblastoma, nodular (composite Schwannian stroma-rich/stroma-dominant and stroma-poor), 19 cases; and NT-unclassifiable, 9 cases. For the NTs, subtype (93% consensus: undifferentiated, 6 cases; poorly differentiated, 155 cases; and differentiated, 15 cases), mitosis-karyorrhexis index (90% consensus: low, 94 cases; intermediate, 40 cases; and high, 37 cases), mitotic rate (75% consensus: low, 89 cases; high, 50 cases; and not determined, 4 cases), and calcification (100% consensus: yes, 110 cases and no, 80 cases) were recorded. Statistical analysis demonstrated that the Shimada classification system (90% consensus; 3-year event free survival: 85% for the group with favorable histology and 41% for the group with unfavorable histology; P = 0.31 x 10(-9)) had a significantly stronger prognostic effect than individual features and other combinations. The International Neuroblastoma Pathology Classification, a system based on a framework of the Shimada classification with minor modifications, is proposed for international use in assessing NTs.