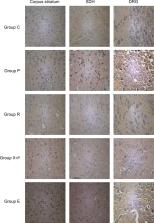 Phosphoinositide 3-kinase (PI3K)/protein kinase B (Akt) is one of the essential signaling pathways for the development and maintenance of neuropathic pain.

To investigate the effect of resveratrol (RES) on paclitaxel-induced neuropathic pain in rats and elucidate the underlying molecular mechanisms.

Compared to the control group, PWT and TWL in the P and LY +R+P groups were significantly decreased on 8th and 14th day after paclitaxel administration ( P<0.05). The expressions of p-Akt, SIRT1, and PGC1α were decreased in paclitaxel-induced neuropathic rats; however, the expressions of p-Akt, SIRT1, and PGC1α were significantly increased after RES treatment ( P<0.05). Furthermore, the expression of p-Akt was decreased by LY294002 ( P<0.05), and amount of SIRT1 and PGC1α expression was inhibited by EX-527 ( P<0.05). The t-Akt level was not significantly changed in all groups. RES prevented paclitaxel-induced mitochondrial damage by PI3K/Akt. RES improves the pain symptoms of paclitaxel neuralgia rats by increasing the IL-10 and decreasing the expression of IL-1β. RES increases the SOD and reduces the MDA. RES reduces apoptosis by SIRT1/PGC1α signal pathway.

Our results suggest that RES may inhibit paclitaxel-induced neuropathic pain via PI3K/Akt and SIRT1/PGC1α pathways.

Claudin-1 and -2: Novel Integral Membrane Proteins Localizing at Tight Junctions with No Sequence Similarity to Occludin

Mikio Furuse,  Kohji Fujita,  Takashi Hiiragi … (1998)
Occludin is the only known integral membrane protein localizing at tight junctions (TJ), but recent targeted disruption analysis of the occludin gene indicated the existence of as yet unidentified integral membrane proteins in TJ. We therefore re-examined the isolated junction fraction from chicken liver, from which occludin was first identified. Among numerous components of this fraction, only a broad silver-stained band ∼22 kD was detected with the occludin band through 4 M guanidine-HCl extraction as well as sonication followed by stepwise sucrose density gradient centrifugation. Two distinct peptide sequences were obtained from the lower and upper halves of the broad band, and similarity searches of databases allowed us to isolate two full-length cDNAs encoding related mouse 22-kD proteins consisting of 211 and 230 amino acids, respectively. Hydrophilicity analysis suggested that both bore four transmembrane domains, although they did not show any sequence similarity to occludin. Immunofluorescence and immunoelectron microscopy revealed that both proteins tagged with FLAG or GFP were targeted to and incorporated into the TJ strand itself. We designated them as “claudin-1” and “claudin-2”, respectively. Although the precise structure/function relationship of the claudins to TJ still remains elusive, these findings indicated that multiple integral membrane proteins with four putative transmembrane domains, occludin and claudins, constitute TJ strands.

Yanxin Wang,  Björn J Oddens,  Richard Strauß … (2011)
In the Active Ulcerative Colitis Trial (ACT)-1 and ACT-2, patients with ulcerative colitis treated with infliximab were more likely than those given placebo to have a clinical response, undergo remission, and have mucosal healing. We investigated the association between early improvement (based on endoscopy) and subsequent clinical outcome. Patients underwent endoscopic evaluations at weeks 0, 8, 30, and 54 (ACT-1 only), and were categorized into 4 subgroups by week 8 (Mayo endoscopy subscore, 0-3). The association of week 8 endoscopy subscores, subsequent colectomy risk, symptoms and corticosteroid use outcomes were analyzed. Mucosal healing was defined as a Mayo endoscopy subscore of 0 (normal) or 1 (mild). Infliximab-treated patients with lower week 8 endoscopy subscores were less likely to progress to colectomy through 54 weeks of follow-up evaluation (P=.0004). This trend was not observed among patients given placebo (P=.47). Patients with lower endoscopy subscores achieved better symptomatic and corticosteroid use outcomes at weeks 30 and 54 (P<.0001, infliximab; P<.01, placebo). Among patients who achieved clinical response at week 8, trends in subsequent clinical outcomes by week 8 endoscopy subscores were generally consistent with that for the overall patient population; no trends were observed among patients who achieved clinical remission. The degree of mucosal healing after 8 weeks of infliximab was correlated with improved clinical outcomes including colectomy. Similar trends were observed for all outcomes except colectomy among the subgroup with clinical response at week 8. The degree of mucosal healing at week 8 among those in clinical remission did not predict subsequent disease course. Copyright © 2011 AGA Institute. Published by Elsevier Inc. All rights reserved.

Adalimumab for induction of clinical remission in moderately to severely active ulcerative colitis: results of a randomised controlled trial.

Andreas Lazar,  Geert D’Haens,  Daan W Hommes … (2011)
The aim of this study was to assess the efficacy and safety of adalimumab (ADA), a recombinant human monoclonal antibody against tumour necrosis factor α (TNF), for the induction of clinical remission in anti-TNF naïve patients with moderately to severely active ulcerative colitis. This 8-week, multicentre, randomised, double-blind, placebo-controlled study (NCT00385736), conducted at 94 centres in North America and Europe, enrolled ambulatory adult patients with Mayo score of ≥ 6 points and endoscopic subscore of ≥ 2 points despite treatment with corticosteroids and/or immunosuppressants. Under the original study protocol, 186 patients were randomised (1:1) to subcutaneous treatment with ADA160/80 (160 mg at week 0, 80 mg at week 2, 40 mg at weeks 4 and 6) or placebo. Subsequently, at the request of European regulatory authorities, the protocol was amended to include a second induction group (ADA80/40: 80 mg at week 0, 40 mg at weeks 2, 4 and 6). The primary efficacy endpoint was clinical remission (Mayo score ≤ 2 with no individual subscore >1) at week 8, assessed in 390 patients randomised (1:1:1) to ADA160/80, ADA80/40, or placebo. Safety was assessed in all enrolled patients. Patients, study site personnel, investigators, and the sponsor were blinded to treatment assignment. At week 8, 18.5% of patients in the ADA160/80 group (p = 0.031 vs placebo) and 10.0% in the ADA80/40 group (p = 0.833 vs placebo) were in remission, compared with 9.2% in the placebo group. Serious adverse events occurred in 7.6%, 3.8% and 4.0% of patients in the placebo, ADA80/40, and ADA160/80 groups, respectively. There were two malignancies in the placebo group, none in the ADA groups. There were no cases of tuberculosis and no deaths. ADA160/80 was safe and effective for induction of clinical remission in patients with moderately to severely active ulcerative colitis failing treatment with corticosteroids and/or immunosuppressants. Clinical trial NCT00385736.