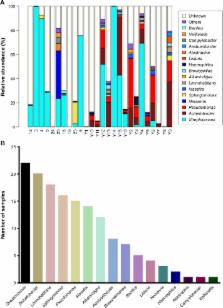 Purulent meningitis (PM) is a severe infectious disease that is associated with high rates of morbidity and mortality. It has been recognized that bacterial infection is a major contributing factor to the pathogenesis of PM. However, there is a lack of information on the bacterial composition in PM, due to the low positive rate of cerebrospinal fluid bacterial culture. Herein, we aimed to discriminate and identify the main pathogens and bacterial composition in cerebrospinal fluid sample from PM patients using high-throughput sequencing approach. The cerebrospinal fluid samples were collected from 26 PM patients, and were determined as culture-negative samples. The polymerase chain reaction products of the hypervariable regions of 16S rDNA gene in these 26 samples of PM were sequenced using the 454 GS FLX system. The results showed that there were 71,440 pyrosequencing reads, of which, the predominant phyla were Proteobacteria and Firmicutes; and the predominant genera were Streptococcus, Acinetobacter, Pseudomonas, and Neisseria. The bacterial species in the cerebrospinal fluid were complex, with 61.5% of the samples presenting with mixed pathogens. A significant number of bacteria belonging to a known pathogenic potential was observed. The number of operational taxonomic units for individual samples ranged from six to 75 and there was a comparable difference in the species diversity that was calculated through alpha and beta diversity analysis. Collectively, the data show that high-throughput sequencing approach facilitates the characterization of the pathogens in cerebrospinal fluid and determine the abundance and the composition of bacteria in the cerebrospinal fluid samples of the PM patients, which may provide a better understanding of pathogens in PM and assist clinicians to make rational and effective therapeutic decisions.

Then and now: use of 16S rDNA gene sequencing for bacterial identification and discovery of novel bacteria in clinical microbiology laboratories.

Michele Teng,  P Woo,  Zion Tse … (2008)
In the last decade, as a result of the widespread use of PCR and DNA sequencing, 16S rDNA sequencing has played a pivotal role in the accurate identification of bacterial isolates and the discovery of novel bacteria in clinical microbiology laboratories. For bacterial identification, 16S rDNA sequencing is particularly important in the case of bacteria with unusual phenotypic profiles, rare bacteria, slow-growing bacteria, uncultivable bacteria and culture-negative infections. Not only has it provided insights into aetiologies of infectious disease, but it also helps clinicians in choosing antibiotics and in determining the duration of treatment and infection control procedures. With the use of 16S rDNA sequencing, 215 novel bacterial species, 29 of which belong to novel genera, have been discovered from human specimens in the past 7 years of the 21st century (2001-2007). One hundred of the 215 novel species, 15 belonging to novel genera, have been found in four or more subjects. The largest number of novel species discovered were of the genera Mycobacterium (n = 12) and Nocardia (n = 6). The oral cavity/dental-related specimens (n = 19) and the gastrointestinal tract (n = 26) were the most important sites for discovery and/or reservoirs of novel species. Among the 100 novel species, Streptococcus sinensis, Laribacter hongkongensis, Clostridium hathewayi and Borrelia spielmanii have been most thoroughly characterized, with the reservoirs and routes of transmission documented, and S. sinensis, L. hongkongensis and C. hathewayi have been found globally. One of the greatest hurdles in putting 16S rDNA sequencing into routine use in clinical microbiology laboratories is automation of the technology. The only step that can be automated at the moment is input of the 16S rDNA sequence of the bacterial isolate for identification into one of the software packages that will generate the result of the identity of the isolate on the basis of its sequence database. However, studies on the accuracy of the software packages have given highly varied results, and interpretation of results remains difficult for most technicians, and even for clinical microbiologists. To fully utilize 16S rDNA sequencing in clinical microbiology, better guidelines are needed for interpretation of the identification results, and additional/supplementary methods are necessary for bacterial species that cannot be identified confidently by 16S rDNA sequencing alone.

Gail L. Rosen,  Erin R. Reichenberger,  Aaron Rosenfeld (2010)
Motivation: Datasets from high-throughput sequencing technologies have yielded a vast amount of data about organisms in environmental samples. Yet, it is still a challenge to assess the exact organism content in these samples because the task of taxonomic classification is too computationally complex to annotate all reads in a dataset. An easy-to-use webserver is needed to process these reads. While many methods exist, only a few are publicly available on webservers, and out of those, most do not annotate all reads. Results: We introduce a webserver that implements the naïve Bayes classifier (NBC) to classify all metagenomic reads to their best taxonomic match. Results indicate that NBC can assign next-generation sequencing reads to their taxonomic classification and can find significant populations of genera that other classifiers may miss. Availability: Publicly available at: http://nbc.ece.drexel.edu. Contact: gailr@ece.drexel.edu