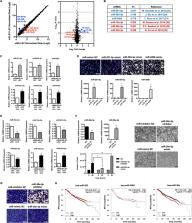 Tumor-associated lymphatic vessels (LV) serve as a route of cancer dissemination through the prometastatic crosstalk between lymphatic endothelial cells (LECs) lining the LVs and cancer cells. Compared to blood endothelial cell-derived angiocrine factors, however, LEC-secreted factors in the tumor microenvironment and their roles in tumor metastasis are poorly understood. Here, we report that ELK3 expressed in LECs contributes to the dissemination of cancer cells during tumor growth by providing oncogenic miRNAs to tumor cells through exosomes. We found that conditioned medium from ELK3-suppressed LECs (LCM) lost its ability to promote the migration and invasion of breast cancer cells such as MDA-MB-231, Hs578T and BT20 in vitro. Suppression of ELK3 in LECs diminished the ability of LECs to promote tumor growth and metastasis of MDA-MB-231 in vivo. Exosomes derived from LECs significantly increased the migration and invasion of MDA-MB-231 in vitro, but ELK3 suppression significantly diminished the pro-oncogenic activity of exosomes from LECs. Based on the miRNA expression profiles of LECs and functional analysis, we identified miR-503-3p, miR-4269 and miR-30e-3p as downstream targets of ELK3 in LECs, which cause the above phenotype of cancer cells. These findings strongly suggest that ELK3 expressed in LECs is a major regulator that controls the communication between the tumor microenvironment and tumors to support cancer metastasis.

Suresh Mathivanan,  Hong Ji,  Richard J. Simpson (2010)
In addition to intracellular organelles, eukaryotic cells also contain extracellular organelles that are released, or shed, into the microenvironment. These membranous extracellular organelles include exosomes, shedding microvesicles (SMVs) and apoptotic blebs (ABs), many of which exhibit pleiotropic biological functions. Because extracellular organelle terminology is often confounding, with many preparations reported in the literature being mixtures of extracellular vesicles, there is a growing need to clarify nomenclature and to improve purification strategies in order to discriminate the biochemical and functional activities of these moieties. Exosomes are formed by the inward budding of multivesicular bodies (MVBs) and are released from the cell into the microenvironment following the fusion of MVBs with the plasma membrane (PM). In this review we focus on various strategies for purifying exosomes and discuss their biophysical and biochemical properties. An update on proteomic analysis of exosomes from various cell types and body fluids is provided and host-cell specific proteomic signatures are also discussed. Because the ectodomain of ~42% of exosomal integral membrane proteins are also found in the secretome, these vesicles provide a potential source of serum-based membrane protein biomarkers that are reflective of the host cell. ExoCarta, an exosomal protein and RNA database (http://exocarta.ludwig.edu.au), is described. Copyright © 2010 Elsevier B.V. All rights reserved.