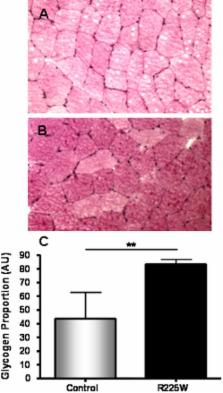 AMP-activated protein kinase (AMPK) is a heterotrimeric enzyme that is evolutionarily conserved from yeast to mammals and functions to maintain cellular and whole body energy homeostasis. Studies in experimental animals demonstrate that activation of AMPK in skeletal muscle protects against insulin resistance, type 2 diabetes and obesity. The regulatory γ 3 subunit of AMPK is expressed exclusively in skeletal muscle; however, its importance in controlling overall AMPK activity is unknown. While evidence is emerging that gamma subunit mutations interfere specifically with AMP activation, there remains some controversy regarding the impact of gamma subunit mutations [1]– [3]. Here we report the first gain-of-function mutation in the muscle-specific regulatory γ 3 subunit in humans.

We sequenced the exons and splice junctions of the AMPK γ 3 gene ( PRKAG3) in 761 obese and 759 lean individuals, identifying 87 sequence variants including a novel R225W mutation in subjects from two unrelated families. The γ 3 R225W mutation is homologous in location to the γ 2R302Q mutation in patients with Wolf-Parkinson-White syndrome and to the γ 3R225Q mutation originally linked to an increase in muscle glycogen content in purebred Hampshire Rendement Napole (RN -) pigs. We demonstrate in differentiated muscle satellite cells obtained from the vastus lateralis of R225W carriers that the mutation is associated with an approximate doubling of both basal and AMP-activated AMPK activities. Moreover, subjects bearing the R225W mutation exhibit a ∼90% increase of skeletal muscle glycogen content and a ∼30% decrease in intramuscular triglyceride (IMTG).

We have identified for the first time a mutation in the skeletal muscle-specific regulatory γ 3 subunit of AMPK in humans. The γ 3R225W mutation has significant functional effects as demonstrated by increases in basal and AMP-activated AMPK activities, increased muscle glycogen and decreased IMTG. Overall, these findings are consistent with an important regulatory role for AMPK γ 3 in human muscle energy metabolism.

Pauline C. Ng, Steven Henikoff (2002)
A major interest in human genetics is to determine whether a nonsynonymous single-base nucleotide polymorphism (nsSNP) in a gene affects its protein product and, consequently, impacts the carrier's health. We used the SIFT (Sorting Intolerant From Tolerant) program to predict that 25% of 3084 nsSNPs from dbSNP, a public SNP database, would affect protein function. Some of the nsSNPs predicted to affect function were variants known to be associated with disease. Others were artifacts of SNP discovery. Two reports have indicated that there are thousands of damaging nsSNPs in an individual's human genome; we find the number is likely to be much lower.

Lee G D Fryer, Asha Parbu-Patel, David Carling (2002)
AMP-activated protein kinase (AMPK) is activated within the cell in response to multiple stresses that increase the intracellular AMP:ATP ratio. Here we show that incubation of muscle cells with the thiazolidinedione, rosiglitazone, leads to a dramatic increase in this ratio with the concomitant activation of AMPK. This finding raises the possibility that a number of the beneficial effects of the thiazolidinediones could be mediated via activation of AMPK. Furthermore, we show that in addition to the classical activation pathway, AMPK can also be stimulated without changing the levels of adenine nucleotides. In muscle cells, both hyperosmotic stress and the anti-diabetic agent, metformin, activate AMPK in the absence of any increase in the AMP:ATP ratio. However, although activation is no longer dependent on this ratio, it still involves increased phosphorylation of threonine 172 within the catalytic (alpha) subunit. AMPK stimulation in response to hyperosmotic stress does not appear to involve phosphatidylinositol 3-phosphate kinase, protein kinase C, mitogen-activated protein (MAP) kinase kinase, or p38 MAP kinase alpha or beta. Our results demonstrate that AMPK can be activated by at least two distinct signaling mechanisms and suggest that it may play a wider role in the cellular stress response than was previously understood.

* To whom correspondence should be addressed. E-mail: Maryellen.Harper@ 123456uottawa.ca