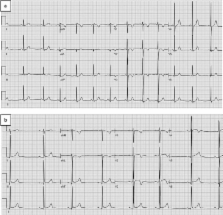 Preparticipation screening programmes for underlying cardiac pathologies are now commonplace for many international sporting organisations. However, providing medical clearance for an asymptomatic athlete without a family history of sudden cardiac death (SCD) is especially challenging when the athlete demonstrates particularly abnormal repolarisation patterns, highly suggestive of an inherited cardiomyopathy or channelopathy. Deep T-wave inversions of ≥2 contiguous anterior or lateral leads (but not aVR, and III) are of major concern for sports cardiologists who advise referring team physicians, as these ECG alterations are a recognised manifestation of hypertrophic cardiomyopathy (HCM) and arrhythmogenic right ventricular cardiomyopathy (ARVC). Subsequently, inverted T-waves may represent the first and only sign of an inherited heart muscle disease, in the absence of any other features and before structural changes in the heart can be detected. However, to date, there remains little evidence that deep T-wave inversions are always pathognomonic of either a cardiomyopathy or an ion channel disorder in an asymptomatic athlete following long-term follow-up.

This paper aims to provide a systematic review of the prevalence of T-wave inversion in athletes and examine T-wave inversion and its relationship to structural heart disease, notably HCM and ARVC with a view to identify young athletes at risk of SCD during sport. Finally, the review proposes clinical management pathways (including genetic testing) for asymptomatic athletes demonstrating significant T-wave inversion with structurally normal hearts.

Hypertrophic cardiomyopathy: distribution of disease genes, spectrum of mutations, and implications for a molecular diagnosis strategy.

Philippe Charron,  Michel Komajda,  Celine LEDEUIL … (2003)
Hypertrophic cardiomyopathy is an autosomal-dominant disorder in which 10 genes and numerous mutations have been reported. The aim of the present study was to perform a systematic screening of these genes in a large population, to evaluate the distribution of the disease genes, and to determine the best molecular strategy in clinical practice. The entire coding sequences of 9 genes (MYH7, MYBPC3, TNNI3, TNNT2, MYL2, MYL3, TPM1, ACTC, andTNNC1) were analyzed in 197 unrelated index cases with familial or sporadic hypertrophic cardiomyopathy. Disease-causing mutations were identified in 124 index patients ( approximately 63%), and 97 different mutations, including 60 novel ones, were identified. The cardiac myosin-binding protein C (MYBPC3) and beta-myosin heavy chain (MYH7) genes accounted for 82% of families with identified mutations (42% and 40%, respectively). Distribution of the genes varied according to the prognosis (P=0.036). Moreover, a mutation was found in 15 of 25 index cases with "sporadic" hypertrophic cardiomyopathy (60%). Finally, 6 families had patients with more than one mutation, and phenotype analyses suggested a gene dose effect in these compound-heterozygous, double-heterozygous, or homozygous patients. These results might have implications for genetic diagnosis strategy and, subsequently, for genetic counseling. First, on the basis of this experience, the screening of already known mutations is not helpful. The analysis should start by testing MYBPC3 and MYH7 and then focus on TNNI3, TNNT2, and MYL2. Second, in particularly severe phenotypes, several mutations should be searched. Finally, sporadic cases can be successfully screened.

Genetic counselling and testing in cardiomyopathies: a position statement of the European Society of Cardiology Working Group on Myocardial and Pericardial Diseases.

A. S. Keren,  Philippe Charron,  Lorenzo Monserrat … (2010)
Advances in molecular genetics present new opportunities and challenges for cardiologists who manage patients and families with cardiomyopathies. The aims of this position statement of the European Society of Cardiology Working Group on Myocardial and Pericardial Diseases are to review the general issues related to genetic counselling, family screening and genetic testing in families with a cardiomyopathy, and to provide key messages and suggestions for clinicians involved in their management.

Utility of cardiac magnetic resonance imaging in the diagnosis of hypertrophic cardiomyopathy.

Kenneth S. Casey,  Barry J Maron,  Michael Jerosch-Herold … (2005)
Two-dimensional echocardiography is currently the standard test for the clinical diagnosis of hypertrophic cardiomyopathy (HCM). The present study was undertaken to determine whether cardiac MRI (CMR) affords greater accuracy than echocardiography in establishing the diagnosis and assessing the magnitude of left ventricular (LV) hypertrophy in HCM. Forty-eight patients (age 34+/-16 years) suspected of having HCM (or with a confirmed diagnosis) were imaged by both echocardiography and CMR to assess LV wall thickness in 8 anatomic segments (total n=384 segments) and compared in a blinded fashion. Maximum LV thickness was similar by echocardiography (21.7+/-9.1 mm) and CMR (22.5+/-9.6 mm; P=0.21). However, in 3 (6%) of the 48 patients, echocardiography did not demonstrate LV hypertrophy, and CMR identified otherwise undetected areas of wall thickening in the anterolateral LV free wall (17 to 20 mm), which resulted in a new diagnosis of HCM. In the overall study group, compared with CMR, echocardiography also underestimated the magnitude of hypertrophy in the basal anterolateral free wall (by 20+/-6%; P=0.001), as well as the presence of extreme LV wall thickness (> or =30 mm) in 10% of patients (P<0.05). CMR is capable of identifying regions of LV hypertrophy not readily recognized by echocardiography and was solely responsible for diagnosis of the HCM phenotype in an important minority of patients. CMR enhances the assessment of LV hypertrophy, particularly in the anterolateral LV free wall, and represents a powerful supplemental imaging test with distinct diagnostic advantages for selected HCM patients.

This is an open-access article distributed under the terms of the Creative Commons Attribution Non-commercial License, which permits use, distribution, and reproduction in any medium, provided the original work is properly cited, the use is non commercial and is otherwise in compliance with the license. See: http://creativecommons.org/licenses/by-nc/3.0/ and http://creativecommons.org/licenses/by-nc/3.0/legalcode