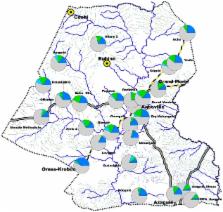 New efforts are being made to improve understanding of the epidemiology of the helminths and intensifying the control efforts against these parasites. In contrast, relatively few studies are being carried out in this direction for the intestinal protozoa. To contribute to a better comprehension of the epidemiology of the intestinal protozoa, prevalence, and spatial distribution of Entamoeba histolytica/dispar and Giardia lamblia, and their association with drinking water supplies, were determined in the Agboville department in southeast Côte d'Ivoire.

Stool samples were taken from more than 1,300 schoolchildren in the third year of primary education (CE1) from 30 primary schools and preserved in SAF (sodium acetate-acetic acid-formalin). The samples were analyzed by formalin-ether concentration. Then, a survey questionnaire addressed to schoolchildren and school directors was used to collect data on water supplies. Prevalence of E. histolytica/ dispar and G. lamblia were, respectively, 18.8% and 13.9%. No particular focus zone was observed in the spatial distribution of the two species. Significant negative association was observed between use of tap water and high prevalence of E. histolytica/ dispar infection (OR = 0.83, p = 0.01). High prevalence of G. lamblia infection was positively associated with use of ponds as the source of drinking water (OR = 1.28, p = 0.009).

These two species of pathogenic protozoa are present with substantial prevalence in this area of Côte d'Ivoire. Although their spatial distribution is not focused in any one place, determination of the population segments with the highest levels of infection will help to target the chemotherapeutic fight. To reinforce treatment with chemotherapeutic agents, tap water should be made available in all the localities of this area.

According to WHO, intestinal amoebiasis caused by Entamoeba histolytica is the third principal parasitic disease responsible for mortality in the world. This protozoal parasite infects approximately 180 million individuals throughout the world, among whom 40 to 110 thousand die from it each year. Giardiasis, caused by another protozoan parasite, Giardia lamblia, infects approximately 200 million individuals throughout the world, is a frequent cause of diarrhea in children, and can have negative impact on growth and development. Unfortunately, these intestinal protozoa are taken into account in few epidemiologic studies. The investigation we carried out to determine prevalence and spatial distribution of these infections shows the importance of these parasites in the Agboville department in southeast Cote d'Ivoire. Determination of spatial distribution of these parasites will help to focus delivery of chemotherapy in this area. In addition, our description of the relation of sources of drinking water with these parasitic infections will contribute to the development of an integrated treatment program for these parasites in this area of Côte d'Ivoire. This work will help make the population and political powers aware of the importance of these parasites and the need for safe drinking water in all localities of this area.

Peter Hotez,  J BETHONY,  J. Pearce … (2008)
Helminths are parasitic worms. They are the most common infectious agents of humans in developing countries and produce a global burden of disease that exceeds better-known conditions, including malaria and tuberculosis. As we discuss here, new insights into fundamental helminth biology are accumulating through newly completed genome projects and the nascent application of transgenesis and RNA interference technologies. At the same time, our understanding of the dynamics of the transmission of helminths and the mechanisms of the Th2-type immune responses that are induced by infection with these parasitic worms has increased markedly. Ultimately, these advances in molecular and medical helminth biology should one day translate into a new and robust pipeline of drugs, diagnostics, and vaccines for targeting parasitic worms that infect humans.

Multiple parasite infections and their relationship to self-reported morbidity in a community of rural Côte d'Ivoire.

Eliézer N’Goran,  Cynthia Adjoua,  Kigbafori D Silué … (2004)
Concomitant parasitic infections are common in the developing world, yet most studies focus on a single parasite in a narrow age group. We investigated the extent of polyparasitism and parasite associations, and related these findings to self-reported morbidity. Inhabitants of 75 randomly selected households from a single village in western Côte d'Ivoire provided multiple faecal specimens and a single finger prick blood sample. The Kato-Katz technique and a formol-ether concentration method were employed to screen faecal samples for Schistosoma mansoni, soil-transmitted helminths and intestinal protozoa. Giemsa-stained blood smears were analysed for malaria parasites. A questionnaire was administered for collection of demographic information and self-reported morbidity indicators. Complete parasitological data were obtained for 500/561 (89.1%) participants, similarly distributed among sex, with an age range from 5 days to 91 years. The prevalences of Plasmodium falciparum, hookworms, Entamoeba histolytica/E. dispar, and S. mansoni were 76.4%, 45.0%, 42.2%, and 39.8%, respectively. Three-quarters of the population harboured three or more parasites concurrently. Multivariate analysis revealed significant associations between several pairs of parasites. Some parasitic infections and the total number of parasites were significantly associated with self-reported morbidity indicators. Our data confirm that polyparasitism is very common in rural Côte d'Ivoire and that people have clear perceptions about the morbidity caused by some of these parasitic infections. Our findings can be used for the design and implementation of sound intervention strategies to mitigate morbidity and co-morbidity.

Further observations on the formol-ether concentration technique for faecal parasites.

Publisher ID: 08-PNTD-RA-0499R2
DOI: 10.1371/journal.pntd.0000574
PMC ID: 2800181
PubMed ID: 20087416
Copyright statement: Ouattara et al. This is an open-access article distributed under the terms of the Creative Commons Attribution License, which permits unrestricted use, distribution, and reproduction in any medium, provided the original author and source are credited.