“Don’t Judge a Book Its Cover”: A Qualitative Study of Methadone Patients’ Experiences of Stigma 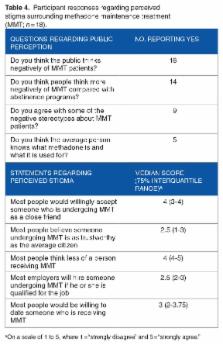 Despite its efficacy and widespread use, methadone maintenance treatment (MMT) continues to be widely stigmatized. Reducing the stigma surrounding MMT will help improve the accessibility, retention, and treatment outcomes in MMT.

Stigma is a widespread and serious issue that adversely affects MMT patients’ quality of life and treatment. More efforts are needed to combat MMT-related stigma.

Understanding Labeling Effects in the Area of Mental Disorders: An Assessment of the Effects of Expectations of Rejection

Societal costs of prescription opioid abuse, dependence, and misuse in the United States.

Howard Birnbaum,  Alan G White,  Matt Schiller … (2011)
The objective of this study was to estimate the societal costs of prescription opioid abuse, dependence, and misuse in the United States. Costs were grouped into three categories: health care, workplace, and criminal justice. Costs were estimated by 1) quantity method, which multiplies the number of opioid abuse patients by cost per opioid abuse patient; and 2) apportionment method, which begins with overall costs of drug abuse per component and apportions the share associated with prescription opioid abuse based on relative prevalence of prescription opioid to overall drug abuse. Excess health care costs per patient were based on claims data analysis of privately insured and Medicaid beneficiaries. Other data/information were derived from publicly available survey and other secondary sources. Total US societal costs of prescription opioid abuse were estimated at $55.7 billion in 2007 (USD in 2009). Workplace costs accounted for $25.6 billion (46%), health care costs accounted for $25.0 billion (45%), and criminal justice costs accounted for $5.1 billion (9%). Workplace costs were driven by lost earnings from premature death ($11.2 billion) and reduced compensation/lost employment ($7.9 billion). Health care costs consisted primarily of excess medical and prescription costs ($23.7 billion). Criminal justice costs were largely comprised of correctional facility ($2.3 billion) and police costs ($1.5 billion).   The costs of prescription opioid abuse represent a substantial and growing economic burden for the society. The increasing prevalence of abuse suggests an even greater societal burden in the future. Wiley Periodicals, Inc.

This article is distributed under the terms of the Creative Commons Attribution-NonCommercial 3.0 License ( http://www.creativecommons.org/licenses/by-nc/3.0/) which permits non-commercial use, reproduction and distribution of the work without further permission provided the original work is attributed as specified on the SAGE and Open Access page( https://us.sagepub.com/en-us/nam/open-access-at-sage).