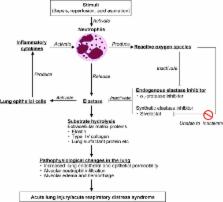 Acute respiratory distress syndrome is a serious condition that can arise following direct or indirect lung injury. It is heterogeneous and has a high mortality rate. Supportive care is the mainstay of treatment and there is no definitive pharmacological treatment as yet. Sivelestat is a neutrophil elastase inhibitor approved in Japan and the Republic of Korea for acute lung injury, including acute respiratory distress syndrome in patients with systemic inflammatory response syndrome. The aim of this review is to examine the clinical utility of sivelestat in different disease states, using data from nonclinical and clinical studies. In nonclinical studies, sivelestat appears to show benefit in acute lung injury without inhibiting the host immune defense in cases of infection. Clinical studies do not yet provide a clear consensus. Phase III and IV Japanese studies have shown improvements in pulmonary function, length of intensive care unit stay, and mechanical ventilation, but a non-Japanese multicenter study did not demonstrate sivelestat to have an effect on ventilator-free days or 28-day all-cause mortality. Evidence of improvement in various parameters, including duration of stay in intensive care, mechanical ventilation, the ratio of partial pressure of arterial oxygen and fraction of inspired oxygen (PaO 2/F IO 2 ratio) ratio, and lung injury scores, has been shown in patients with sepsis or gastric aspiration, and following the surgical treatment of esophageal cancer. To date, there are no particular concerns regarding adverse events, and the available data do not suggest that sivelestat might worsen infections. One study has analyzed cost-effectiveness, finding that sivelestat may reduce costs compared with standard care. The currently available evidence suggests that sivelestat may show some benefit in the treatment of acute lung injury/acute respiratory distress syndrome, although large, randomized controlled trials are needed in specific pathophysiological conditions to explore these potential benefits.

Julia Wheeler,  William Bernard (2007)
Acute respiratory distress syndrome and acute lung injury are well defined and readily recognised clinical disorders caused by many clinical insults to the lung or because of predispositions to lung injury. That this process is common in intensive care is well established. The mainstay of treatment for this disorder is provision of excellent supportive care since these patients are critically ill and frequently have coexisting conditions including sepsis and multiple organ failure. Refinements in ventilator and fluid management supported by data from prospective randomised trials have increased the methods available to effectively manage this disorder.

Abderrazzaq Belaaouaj,  Ronald McCarthy,  Mary Baumann … (1998)
Neutrophil elastase (NE) is a potent serine proteinase whose expression is limited to a narrow window during myeloid development. In neutrophils, NE is stored in azurophil granules along with other serine proteinases (cathepsin G, proteinase 3 and azurocidin) at concentrations exceeding 5 mM. As a result of its capacity to efficiently degrade extracellular matrix, NE has been implicated in a variety of destructive diseases. Indeed, while much interest has focused on the pathologic effects of this enzyme, little is known regarding its normal physiologic function(s). Because previous in vitro data have shown that NE exhibits antibacterial activity, we investigated the role of NE in host defense against bacteria. Generating strains of mice deficient in NE (NE-/-) by targeted mutagenesis, we show that NE-/- mice are more susceptible than their normal littermates to sepsis and death following intraperitoneal infection with Gram negative (Klebsiella pneumoniae and Escherichia coli) but not Gram positive (Staphylococcus aureus) bacteria. Our data indicate that neutrophils migrate normally to sites of infection in the absence of NE, but that NE is required for maximal intracellular killing of Gram negative bacteria by neutrophils.