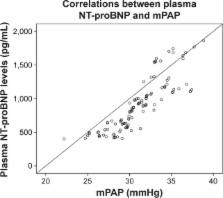 Eighty subjects with AECOPD and high plasma NT-proBNP levels, without any clinical evidence of cor pulmonale, were enrolled. The subjects were randomly allocated into two groups of 40 subjects. In addition to standard treatment for AECOPD, the subjects in group I were treated with irbesartan alone, and those in group II were treated with irbesartan and hydrochlorothiazide for a week. Forty subjects with stable COPD were enrolled as a control group. Plasma NT-proBNP concentrations were measured on admission and on the first, fourth, and seventh days. The subjects’ health-related quality of life was evaluated applying the 36-item short-form questionnaire on the first day before treatment and on the seventh day after treatment.

Treatment of irbesartan and hydrochlorothiazide rapidly decreased plasma NT-proBNP levels in subjects with AECOPD, and the treatment did not impair their physical status.

Rapid measurement of B-type natriuretic peptide in the emergency diagnosis of heart failure.

E Weitzenblum,  C Charpentier,  R Kessler … (1995)
Prognostic factors in COPD patients receiving long-term oxygen (LTO) therapy were recently analyzed, but very few studies considered the prognostic value of pulmonary artery pressure (PAP) in these patients. We investigated 84 patients who had undergone a right heart catheterization just before the onset of LTO. There were 75 men and 9 women, with a mean age of 63.0 +/- 9.9 (SD) years, at the onset of LTO. When PaO2 was persistently less than 55 mm Hg, LTO was initiated. This therapy was started in some patients with PaO2 in the range of 55 to 60 mm Hg if they had signs of cor pulmonale or a resting PAP of 25 mm Hg or greater at right heart catheterization. The daily duration of LTO was 16 h/d or more. Oxygen flow was adapted to achieve a PaO2 of 65 mm Hg or more. The patients were subdivided into subgroups according to the median value of age (cutoff value = 63 years); vital capacity (2,250 mL); FEV1 (800 mL); residual volume-total lung capacity ratio (58%); PaO2 value (52 mm Hg), PaCO2 level (45 mm Hg); and PAP (25 mm Hg). The cumulative 5-year survival rate was 48% for the group as a whole. Actuarial survival curves were plotted for the two subgroups of patients subdivided according to the initial median value of the variables just listed. There was no significant difference in survival rate between subgroups except when taking into account the level of PAP and age. In patients with an initial PAP of 25 mm Hg or less (n = 44), the 5-year survival was of 62.2 vs 36.3% in the remainder (n = 40) [p < 0.001]. We performed a multivariate analysis of survival using Cox's model of the proportional hazards regression including sex and the variables with the same categorization in the stepwise procedure: PAP and age were the only variables included in the final model. We conclude that the best prognostic factor in COPD patients receiving LTO is not the FEV1, nor the degree of hypoxemia or hypercapnia, but the level of PAP.

Utility of a rapid B-natriuretic peptide assay in differentiating congestive heart failure from lung disease in patients presenting with dyspnea.

L.Katherine Morrison,  Alex Harrison,  Padma Krishnaswamy … (2002)
Since B-type natriuretic peptide (BNP) is secreted by the left ventricle (LV) in response to volume elevated LV pressure, we sought to assess whether a rapid assay for BNP levels could differentiate cardiac from pulmonary causes of dyspnea. Differentiating congestive heart failure (CHF) from pulmonary causes of dyspnea is very important for patients presenting to the emergency department (ED) with acute dyspnea. B-natriuretic peptide levels were obtained in 321 patients presenting to the ED with acute dyspnea. Physicians were blinded to BNP levels and asked to give their probability of the patient having CHF and their final diagnosis. Two independent cardiologists were blinded to BNP levels and asked to review the data and evaluate which patients presented with heart failure. Patients with right heart failure from cor pulmonale were classified as having CHF. Patients with CHF (n = 134) had BNP levels of 758.5 +/- 798 pg/ml, significantly higher than the group of patients with a final diagnosis of pulmonary disease (n = 85) whose BNP was 61 +/- 10 pg/ml. The area under the receiver operating curve, which plots sensitivity versus specificity for BNP levels in separating cardiac from pulmonary disease, was 0.96 (p < 0.001). A breakdown of patients with pulmonary disease revealed: chronic obstructive pulmonary disease (COPD): 54 +/- 71 pg/ml (n = 42); asthma: 27 +/- 40 pg/ml (n = 11); acute bronchitis: 44 +/- 112 pg/ml (n = 14); pneumonia: 55 +/- 76 pg/ml (n = 8); tuberculosis: 93 +/- 54 pg/ml (n = 2); lung cancer: 120 +/- 120 pg/ml (n = 4); and acute pulmonary embolism: 207 +/- 272 pg/ml (n = 3). In patients with a history of lung disease but whose current complaint of dyspnea was seen as due to CHF, BNP levels were 731 +/- 764 pg/ml (n = 54). The group with a history of CHF but with a current COPD diagnosis had a BNP of 47 +/- 23 pg/ml (n = 11). Rapid testing of BNP in the ED should help differentiate pulmonary from cardiac etiologies of dyspnea.