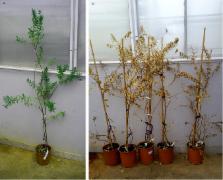 In autumn 2013, the presence of Xylella fastidiosa, a xylem-limited Gram-negative bacterium, was detected in olive stands of an area of the Ionian coast of the Salento peninsula (Apulia, southern Italy), that were severely affected by a disease denoted olive quick decline syndrome (OQDS). Studies were carried out for determining the involvement of this bacterium in the genesis of OQDS and of the leaf scorching shown by a number of naturally infected plants other than olive. Isolation in axenic culture was attempted and assays were carried out for determining its pathogenicity to olive, oleander and myrtle-leaf milkwort. The bacterium was readily detected by quantitative polymerase chain reaction (qPCR) in all diseased olive trees sampled in different and geographically separated infection foci, and culturing of 51 isolates, each from a distinct OQDS focus, was accomplished. Needle-inoculation experiments under different environmental conditions proved that the Salentinian isolate De Donno belonging to the subspecies pauca is able to multiply and systemically invade artificially inoculated hosts, reproducing symptoms observed in the field. Bacterial colonization occurred in prick-inoculated olives of all tested cultivars. However, the severity of and timing of symptoms appearance differed with the cultivar, confirming their differential reaction.

Bradley Purcell,  Donald L. Hopkins (1995)
Numerous bacteria have been isolated from within plants, and many reported from xylem, but only three species of xylem-limited bacteria (XLB) that are fastidious in cultural requirements, are plant pathogens, and exclusively occupy xylem, have been well characterized. Two XLB, Xylella fastidiosa and Pseudomonas syzygii, are transmitted by sucking insects that feed on xylem sap but are not transmitted mechanically from plant to plant. In contrast, Clavibacter xyli is mechanically transmitted to plants by cutting tools. All of these XLB occupy a highly specialized yet diverse ecological niche: the water-conducting systems of an extremely wide range of plant hosts. A variety of detection methods are available as diagnostic aids; each method has advantages and disadvantages; no single method is best for all uses. Molecular and genetic comparisons of strains of XLB lag behind progress being made for many other plant-pathogenic bacteria, but such studies are needed to answer important questions: (a) How do XLB move from cell to cell within plants? (b) What are the physiological and genetic bases of plant host specificity for XLB? (c) Why are only xylem-feeding specialists vectors of X. fastidiosa (and probably P. syzygii), when many leafhoppers feed regularly (but not continuously) on xylem?

Transcriptome profiling of two olive cultivars in response to infection by the CoDiRO strain of Xylella fastidiosa subsp. pauca

Annalisa Giampetruzzi,  Massimiliano Morelli,  Maria Saponari … (2016)
Background The recent Xylella fastidiosa subsp. pauca (Xfp) outbreak in olive (Olea europaea) groves in southern Italy is causing a destructive disease denoted Olive Quick Decline Syndrome (OQDS). Field observations disclosed that Xfp-infected plants of cv. Leccino show much milder symptoms, than the more widely grown and highly susceptible cv. Ogliarola salentina. To determine whether these field observations underlie a tolerant condition of cv. Leccino, which could be exploited for lessening the economic impact of the disease on the local olive industry, transcriptional changes occurring in plants of the two cultivars affected by Xfp were investigated. Results A global quantitative transcriptome profiling comparing susceptible (Ogliarola salentina) and tolerant (Leccino) olive cultivars, infected or not by Xfp, was done on messenger RNA (mRNAs) extracted from xylem tissues. The study revealed that 659 and 447 genes were differentially regulated in cvs Leccino and Ogliarola upon Xfp infection, respectively, whereas 512 genes were altered when the transcriptome of both infected cultivars was compared. Analysis of these differentially expressed genes (DEGs) shows that the presence of Xfp is perceived by the plants of both cultivars, in which it triggers a differential response strongly involving the cell wall. Up-regulation of genes encoding receptor-like kinases (RLK) and receptor-like proteins (RLP) is the predominant response of cv. Leccino, which is missing in cv. Ogliarola salentina. Moreover, both cultivars react with a strong re-modelling of cell wall proteins. These data suggest that Xfp elicits a different transcriptome response in the two cultivars, which determines a lower pathogen concentration in cv. Leccino and indicates that this cultivar may harbor genetic constituents and/or regulatory elements which counteract Xfp infection. Conclusions Collectively these findings suggest that cv. Leccino is endowed with an intrinsic tolerance to Xfp, which makes it eligible for further studies aiming at investigating molecular basis and pathways modulating its different defense response. Electronic supplementary material The online version of this article (doi:10.1186/s12864-016-2833-9) contains supplementary material, which is available to authorized users.