Sputum cell count: biomarkers in the differentiation of asthma, COPD and asthma–COPD overlap 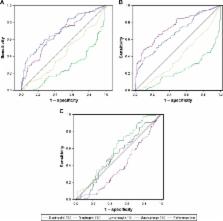 The three groups had different PFT values ( p<0.001) except for forced vital capacity (FVC) between the asthma and ACO groups ( p=0.378). The sputum levels of eosinophil% were decreased in patients with COPD when compared with those in patients with asthma and ACO ( p<0.001 and p<0.001, respectively). There was a difference in sputum neutrophil% and macrophage% counts among the three groups ( p<0.001 and p<0.001, respectively); there was no difference in sputum eosinophil% counts between patients with ACO and asthma ( p=0.668) and there was no difference in the percentage of induced sputum cells between the stage of airway obstruction and the stage of BHR.

The clinical relevance of this study provides evidence that sputum cell counts as an inflammatory biomarker could carry some information to distinguish ACO, asthma and COPD, and these biomarkers need more studies to provide diagnostic value in the differentiation between ACO, asthma and COPD.

Osama Eltboli,  C Brightling (2013)
Chronic lung diseases are very common and form a major threat to large proportions of the population with increased morbidity and mortality. Asthma is one of the most common eosinophilic airway diseases. However, there is growing evidence that eosinophilic inflammation is also important in subgroups of patients with chronic obstructive pulmonary disease, chronic cough and idiopathic pulmonary fibrosis. Several studies have shown that sputum eosinophilia is associated with a favorable response to treatment of corticosteroids in both asthma and chronic obstructive pulmonary disease, and tailored strategies aimed to normalize sputum eosinophils have resulted in a significant reduction in exacerbation rates. In this article, the authors review the role of eosinophilic inflammation in the diagnosis and management of chronic respiratory diseases.

Jing Gao,  Hiroshi Iwamoto,  Jukka Koskela … (2016)
Asthma–COPD overlap syndrome (ACOS) is a commonly encountered chronic airway disease. However, ACOS is still a consensus-based clinical phenotype and the underlying inflammatory mechanisms are inadequately characterized. To clarify the inflammatory mediatypical for ACOS, five biomarkers, namely interleukin (IL)-13, myeloperoxidase (MPO), neutrophil gelatinase-associated lipocalin (NGAL), chitinase-like protein (YKL-40), and IL-6, were selected. This study hypothesized that sputum biomarkers relevant for airway inflammation in asthma (IL-13), COPD (MPO, NGAL), or in both asthma and COPD (YKL-40, IL-6) could be used to differentiate ACOS from COPD and asthma. The aim of this study was to characterize the inflammatory profile and improve the recognition of ACOS. Induced sputum levels of IL-13, MPO, NGAL, YKL-40, and IL-6 were measured by enzyme-linked immunosorbent assay/Luminex assay in a Finnish discovery cohort (n=90) of nonsmokers, smokers, and patients with asthma, COPD, and ACOS and validated in a Japanese cohort (n=135). The classification accuracy of potential biomarkers was compared with area under the receiver operating characteristic curves. Only sputum NGAL levels could differentiate ACOS from asthma (P<0.001 and P<0.001) and COPD (P<0.05 and P=0.002) in the discovery and replication cohorts, respectively. Sputum NGAL levels were independently correlated with the percentage of pre-bronchodilator forced expiratory volume in 1 second predicted in multivariate analysis in the discovery and replication cohorts (P=0.001 and P=0.002, respectively). In conclusion, sputum biomarkers reflecting both airway inflammation and remodeling of the tissue show potential in differentiation between asthma, COPD, and ACOS.