Wild-Type and Non-Wild-Type Mycobacterium tuberculosis MIC Distributions for the Novel Fluoroquinolone Antofloxacin Compared with Those for Ofloxacin, Levofloxacin, and Moxifloxacin 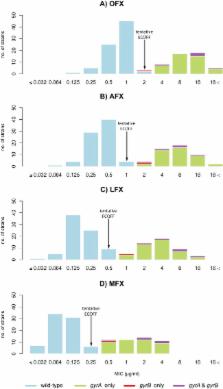 Antofloxacin (AFX) is a novel fluoroquinolone that has been approved in China for the treatment of infections caused by a variety of bacterial species. We investigated whether it could be repurposed for the treatment of tuberculosis by studying its in vitro activity. We determined the wild-type and non-wild-type MIC ranges for AFX as well as ofloxacin (OFX), levofloxacin (LFX), and moxifloxacin (MFX), using the microplate alamarBlue assay, of 126 clinical Mycobacterium tuberculosis strains from Beijing, China, of which 48 were OFX resistant on the basis of drug susceptibility testing on Löwenstein-Jensen medium. The MIC distributions were correlated with mutations in the quinolone resistance-determining regions of gyrA ( Rv0006) and gyrB ( Rv0005). Pharmacokinetic/pharmacodynamic (PK/PD) data for AFX were retrieved from the literature. AFX showed lower MIC levels than OFX but higher MIC levels than LFX and MFX on the basis of the tentative epidemiological cutoff values (ECOFFs) determined in this study. All strains with non-wild-type MICs for AFX harbored known resistance mutations that also resulted in non-wild-type MICs for LFX and MFX. Moreover, our data suggested that the current critical concentration of OFX for Löwenstein-Jensen medium that was recently revised by the World Health Organization might be too high, resulting in the misclassification of phenotypically non-wild-type strains with known resistance mutations as wild type. On the basis of our exploratory PK/PD calculations, the current dose of AFX is unlikely to be optimal for the treatment of tuberculosis, but higher doses could be effective.

Iñaki Comas,  Susanne Homolka,  Stefan Niemann … (2009)
Because genetically monomorphic bacterial pathogens harbour little DNA sequence diversity, most current genotyping techniques used to study the epidemiology of these organisms are based on mobile or repetitive genetic elements. Molecular markers commonly used in these bacteria include Clustered Regulatory Short Palindromic Repeats (CRISPR) and Variable Number Tandem Repeats (VNTR). These methods are also increasingly being applied to phylogenetic and population genetic studies. Using the Mycobacterium tuberculosis complex (MTBC) as a model, we evaluated the phylogenetic accuracy of CRISPR- and VNTR-based genotyping, which in MTBC are known as spoligotyping and Mycobacterial Interspersed Repetitive Units (MIRU)-VNTR-typing, respectively. We used as a gold standard the complete DNA sequences of 89 coding genes from a global strain collection. Our results showed that phylogenetic trees derived from these multilocus sequence data were highly congruent and statistically robust, irrespective of the phylogenetic methods used. By contrast, corresponding phylogenies inferred from spoligotyping or 15-loci-MIRU-VNTR were incongruent with respect to the sequence-based trees. Although 24-loci-MIRU-VNTR performed better, it was still unable to detect all strain lineages. The DNA sequence data showed virtually no homoplasy, but the opposite was true for spoligotyping and MIRU-VNTR, which was consistent with high rates of convergent evolution and the low statistical support obtained for phylogenetic groupings defined by these markers. Our results also revealed that the discriminatory power of the standard 24 MIRU-VNTR loci varied by strain lineage. Taken together, our findings suggest strain lineages in MTBC should be defined based on phylogenetically robust markers such as single nucleotide polymorphisms or large sequence polymorphisms, and that for epidemiological purposes, MIRU-VNTR loci should be used in a lineage-dependent manner. Our findings have implications for strain typing in other genetically monomorphic bacteria.

Rosa Hernández,  V Quenzer,  Mark Cook … (1998)
A colorimetric, microplate-based Alamar Blue assay (MABA) method was used to determine the MICs of isoniazid (INH), rifampin, streptomycin (SM), and ethambutol (EMB) for 34 Peruvian Mycobacterium tuberculosis isolates (including both pansensitive and multidrug-resistant strains) and the H37Rv strain by using bacterial suspensions prepared directly from solid media. Results for all isolates were available within 8 days. Discordant results were observed on initial tests for 3 of 16 INH-susceptible isolates, 5 of 31 EMB-susceptible isolates, and 2 of 4 SM-resistant isolates (by the BACTEC 460 system). The overall agreements between the MICs obtained by MABA and the results obtained with the BACTEC 460 system were 87.9% for initial results and 93.6% after retesting 12 of 17 samples with discrepant results. Interpretation of MABA endpoints improved with technical experience. The MABA is a simple, rapid, low-cost, appropriate technology which does not require expensive instrumentation and which makes use of a nontoxic, temperature-stable reagent.

Acquired Resistance to Bedaquiline and Delamanid in Therapy for Tuberculosis.