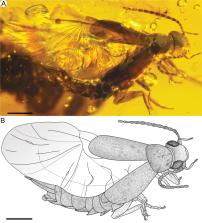 A new species of one of the basal families among extant Dermaptera , Pygidicranidae , is described from mid-Cretaceous amber of Myanmar based on two females and a male. Astreptolabis laevis sp. nov., belongs to the extinct subfamily Astreptolabidinae , sharing the diagnostic combination of features typical of this group, such as the well-developed compound eyes, large pronotum, and straight and tubular cerci. The discovery of a male with its genitalia partly exerted permits characterization of traits for the subfamily and provides further information on the uniqueness and affinities of the subfamily. In addition, the extended hind wing allows for a comparison between the folding mechanism between these fossils and their modern counterparts, demonstrating considerable conservatism in hind wing evolution among Dermaptera .

Michael Engel,  Phillip Barden,  Mark Riccio … (2016)
A hallmark of animals that are eusocial, or those with advanced sociality, is reproductive specialization into worker and queen castes. In the most derived societies, these divisions are essentially fixed and in some arthropods, include further specialization--a tripartite system with a soldier caste that defends the colony. Eusociality has originated numerous times among insects but is believed to have appeared first in the termites (Isoptera), in the Early Cretaceous. However, all termites known from the Cretaceous have, until now, only been winged reproductives (alates and dealates); the earliest soldiers and definitive workers were known from just the Miocene (ca. 17-20 million years ago [mya]). Here, we report six termite species preserved in Early Cretaceous (ca. 100 mya) amber from Myanmar, one described as Krishnatermes yoddha gen. et sp. nov., comprising the worker/pseudergate, winged reproductive, and soldier, and a second species, Gigantotermes rex gen. et sp. nov., based on one of the largest soldier termites yet known. Phylogenetic analysis indicates that Krishnatermes are in the basal "Meiatermes-grade" of Cretaceous termites. Workers/pseudergates of another four species are briefly described, but not named. One of these workers/pseudergates reveals that ants--the most serious enemies of modern termites--lived in close proximity to termites in the Burmese paleofauna. These discoveries demonstrate the Mesozoic antiquity of specialized termite caste systems and corroborate that among all social species, termites probably had the original societies.

ANDREW ROSS (2019)
A list of all known taxa described or recorded from Burmese amber from the published literature up to the end of 2018 is given, along with a comprehensive bibliography. The history of the study of inclusions is summarised, and demonstrates that the number of species has risen exponentially over the past two decades. The first three species were named in 1916 and by the end of 1920 a total of 42 species had been named by T.D.A. Cockerell. Only three more species were named by 1999 though by the end of 2018 the total had risen to an incredible 1,192 species, of which over half were named in the past three years. Some 320 species were named in 2018, the highest number described from one type of amber in any one year in the entire history of amber studies.