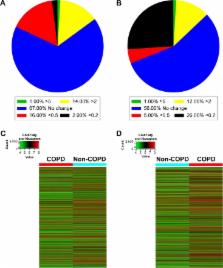 Abundant, differentially expressed lncRNAs and mRNAs were identified by microarray analysis and these might play a partial or key role in the diagnosis of patients with COPD. LncRNA TUG1 may become a very important class of biomarker and may act as a potential diagnostic and therapeutic target for patients with COPD.

John S. Mattick,  Marcel E Dinger,  T Mercer … (2009)
For 50 years the term 'gene' has been synonymous with regions of the genome encoding mRNAs that are translated into protein. However, recent genome-wide studies have shown that the human genome is pervasively transcribed and produces many thousands of regulatory non-protein-coding RNAs (ncRNAs), including microRNAs, small interfering RNAs, PIWI-interacting RNAs and various classes of long ncRNAs. It is now clear that these RNAs fulfil critical roles as transcriptional and post-transcriptional regulators and as guides of chromatin-modifying complexes. Here we review the biology of ncRNAs, focusing on the fundamental mechanisms by which ncRNAs facilitate normal development and physiology and, when dysfunctional, underpin disease. We also discuss evidence that intergenic regions associated with complex diseases express ncRNAs, as well as the potential use of ncRNAs as diagnostic markers and therapeutic targets. Taken together, these observations emphasize the need to move beyond the confines of protein-coding genes and highlight the fact that continued investigation of ncRNA biogenesis and function will be necessary for a comprehensive understanding of human disease.