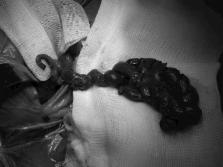 Intestinal atresia in both twins from the same pregnancy is very rare. Only seven pairs of twins have been described. The authors report on two cases of monozygotic twins with different types of intestinal atresia and clinical evolution. Both pairs of observed twins turned out to be concordant for the presence of intestinal malformations and for the absence of other linked malformations; nevertheless, the atresic lesions were anatomically discordant in each pair of monozygotic twins. Therefore, the diagnostic and therapeutic procedures have shown some differences in phenotypic expression between the twins of both pairs. Possible etiologic factors and pathogenetic pathways are discussed, and the importance of an accurate clinical and instrumental investigation and a long-term follow-up is underlined. Very rare models, such as pairs of monozygotic twins presenting intestinal atresia, represent an extraordinary resource to add new clinical and laboratory information likely to be useful in future advancements to understand the underlying etiology and pathogenesis.

Daniel Teitelbaum,  Doreen Brady-West,  Pamela Brown … (2005)
To determine predictors of survival and of weaning off parenteral nutrition (PN) in pediatric short bowel syndrome (SBS) patients. Pediatric SBS carries extensive morbidity and high mortality, but factors believed to predict survival or weaning from PN have been based on limited studies. This study reviews outcomes of a large number of SBS infants and identifies predictors of success. Multivariate Cox proportional hazards analysis was conducted on 80 pediatric SBS patients. Primary outcome was survival; secondary outcome was ability to wean off PN. Nonsignificant covariates were eliminated. P or =2.5 mg/dL) was the strongest predictor of mortality (relative risk [RR] 22.7, P = 0.005). Although absolute small bowel length was only slightly predictive, percentage of normal bowel length (for a given infant's gestational age) was strongly predictive of mortality (if or =10% of normal, RR of weaning PN was 11.8, P = 0.001). Presence of the ileocecal valve (ICV) also strongly predicted weaning PN (RR 3.9, P < 0.0005); however, ICV was not predictive of survival. Cholestasis and age-adjusted small bowel length are the major predictors of mortality in pediatric SBS. Age-adjusted small bowel length and ICV are the major predictors of weaning from PN. These data permit better prediction of outcomes of pediatric SBS, which may help to direct future management of these challenging patients.

Hereditary multiple atresias of the gastrointestinal tract: report of a case and review of the literature.

D Kluth,  W Lambrecht (1998)
Hereditary multiple atresia of the gastrointestinal tract is an extremely rare subgroup of intestinal atresia. The aim of this study was to report a new case, to review the literature, and to describe the unique features of this malformation. A computer-generated list of articles on this subject was obtained, and all articles relative to this malformation were reviewed. Thirty-five other well-documented cases were found in the literature. Hereditary multiple atresias have several unique features: (1) the abdominal x-ray shows signs of gastric or duodenal atresia combined with typical large rounded or oval homogeneous calcifications in the abdominal cavity, (2) intraoperatively widespread atresias (exclusively type I and II) extending mostly from stomach to rectum are found, (3) cystic dilatation of the bile ducts can be present in cases with both complete pyloric and duodenal or proximal jejunal atresia, (4) the pathogenesis is still speculative; a combined immunodeficiency should be excluded, and (5) a fatal outcome is the rule.