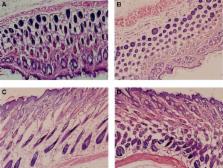 Phytantriol- and glycerol monooleate-based cubosomes were produced and characterized as a targeted and sustained transdermal delivery system for capsaicin. The cubosomes were prepared by emulsification and homogenization of phytantriol (F1), glycerol monooleate (F2), and poloxamer dispersions, characterized for morphology and particle size distribution by transmission electron microscope and photon correlation spectroscopy. Their Im3m crystallographic space group was confirmed by small-angle X-ray scattering. An in vitro release study showed that the cubosomes provided a sustained release system for capsaicin. An in vitro diffusion study conducted using Franz diffusion cells indicated that the skin retention of capsaicin from cubosomes in the stratum corneum was much higher (2.75±0.22 μg versus 4.32±0.13 μg, respectively) than that of capsaicin cream (0.72±0.13 μg). The stress testing showed that the cubosome formulations were stable under strong light and high temperature for up to 10 days. After multiapplications on mouse skin, the irritation of capsaicin cubosomes and cream was light with the least amount of side effects. Overall, the present study demonstrated that cubosomes may be a suitable skin-targeted and sustained delivery system for the transdermal administration of capsaicin.

Overcoming the challenges in administering biopharmaceuticals: formulation and delivery strategies.

Samir Mitragotri,  Paul Burke,  Robert S. Langer (2014)
The formulation and delivery of biopharmaceutical drugs, such as monoclonal antibodies and recombinant proteins, poses substantial challenges owing to their large size and susceptibility to degradation. In this Review we highlight recent advances in formulation and delivery strategies--such as the use of microsphere-based controlled-release technologies, protein modification methods that make use of polyethylene glycol and other polymers, and genetic manipulation of biopharmaceutical drugs--and discuss their advantages and limitations. We also highlight current and emerging delivery routes that provide an alternative to injection, including transdermal, oral and pulmonary delivery routes. In addition, the potential of targeted and intracellular protein delivery is discussed.

Ashraf Ali M. A. El Shorbgy,  Hugh Smyth,  Mohammad Montazeri (2011)
We have developed a novel spray gelation-based method to synthesize a new series of magnetically responsive hydrogel nanoparticles for biomedical and drug delivery applications. The method is based on the production of hydrogel nanoparticles from sprayed polymeric microdroplets obtained by an air-jet nebulization process that is immediately followed by gelation in a crosslinking fluid. Oligoguluronate (G-blocks) was prepared through the partial acid hydrolysis of sodium alginate. PEG-grafted chitosan was also synthesized and characterized (FTIR, EA, and DSC). Then, magnetically responsive hydrogel nanoparticles based on alginate and alginate/G-blocks were synthesized via aerosolization followed by either ionotropic gelation or both ionotropic and polyelectrolyte complexation using CaCl(2) or PEG-g-chitosan/CaCl(2) as crosslinking agents, respectively. Particle size and dynamic swelling were determined using dynamic light scattering (DLS) and microscopy. Surface morphology of the nanoparticles was examined using SEM. The distribution of magnetic cores within the hydrogels nanoparticles was also examined using TEM. In addition, the iron and calcium contents of the particles were estimated using EDS. Spherical magnetic hydrogel nanoparticles with average particle size of 811 ± 162 to 941 ± 2 nm were obtained. This study showed that the developed method is promising for the manufacture of hydrogel nanoparticles, and it represents a relatively simple and potential low-cost system.

J. Shah (2001)
Lipids have been used extensively for drug delivery in various forms such as liposomes, and solid-matrices. The focus of this review is evaluation of liquid crystalline cubic phases, spontaneously formed when amphiphilic lipids are placed in aqueous environment, for drug delivery. Cubic phases have an interesting thermodynamically stable structure consisting of curved bicontinuous lipid bilayer in three dimensions, separating two congruent networks of water channels. The unique structure of cubic phase has been extensively studied using various spectroscopic techniques and their resemblance to biomembranes has prompted many scientists to study behavior of proteins in cubic phases. The ability of cubic phase to incorporate and control release of drugs of varying size and polar characteristics, and biodegradability of lipids make it an interesting drug delivery system for various routes of administration. Cubic phases have been shown to deliver small molecule drugs and large proteins by oral and parenteral routes in addition to local delivery in vaginal and periodontal cavity. A number of different proteins in cubic phase appear to retain their native conformation and bioactivity, and are protected from chemical and physical inactivation perhaps due to the reduced activity of water and biomembrane-like structure of cubic phase. Release of drugs from cubic phase typically show diffusion controlled release from a matrix as indicated by Higuchi's square root of time release kinetics. Incorporation of drug in cubic phase can cause phase transformation to lamellar or reversed hexagonal phase depending on the polarity and concentration of the drug, which may affect the release profile. Biodegradability, phase behavior, ability to deliver drugs of varying sizes and polarity and the ability to enhance the chemical and/or physical stability of incorporated drugs and proteins make the cubic phase gel an excellent candidate for use as a drug delivery matrix. However, shorter release duration and the extremely high viscosity may limit its use to specific applications such as periodontal, mucosal, vaginal and short acting oral and parenteral drug delivery.