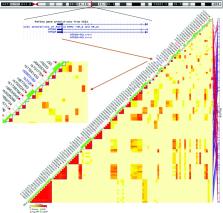 The serotonin system has been suggested to moderate the association between childhood maltreatment and rumination, with the latter in its turn reported to be a mediator in the depressogenic effect of childhood maltreatment. Therefore, we investigated whether the associations of two epigenetic regulatory polymorphisms in the HTR2A serotonin receptor gene with Ruminative Responses Scale rumination and its two subtypes, brooding and reflection, are moderated by childhood adversity (derived from the Childhood Trauma Questionnaire) among 1,501 European white adults. We tested post hoc whether the significant associations are due to depression. We also tested the replicability of the significant results within the two subsamples of Budapest and Manchester. We revealed two significant models: both the association of methylation site rs6311 with rumination and that of miRNA binding site rs3125 (supposed to bind miR-1270, miR-1304, miR-202, miR-539 and miR-620) with brooding were a function of childhood adversity, and both interaction findings were significantly present both in the never-depressed and in the ever-depressed group. Moreover, the association of rs3125 with brooding could be replicated across the separate subsamples, and remained significant even when controlling for lifetime depression and the Brief Symptom Inventory depression score. These findings indicate the crucial importance of involving stress factors when considering endophenotypes and suggest that brooding is a more promising endophenotype than a broader measure of rumination. Transdiagnostic relevance of the brooding endophenotype and the potential of targeting epigenetic regulatory polymorphisms of HTR2A in primary and secondary prevention of depression and possibly of other disorders are also discussed.

Sarah M. Peterson,  Jeffrey Thompson,  Melanie Ufkin … (2014)
The human genome encodes for over 1800 microRNAs (miRNAs), which are short non-coding RNA molecules that function to regulate gene expression post-transcriptionally. Due to the potential for one miRNA to target multiple gene transcripts, miRNAs are recognized as a major mechanism to regulate gene expression and mRNA translation. Computational prediction of miRNA targets is a critical initial step in identifying miRNA:mRNA target interactions for experimental validation. The available tools for miRNA target prediction encompass a range of different computational approaches, from the modeling of physical interactions to the incorporation of machine learning. This review provides an overview of the major computational approaches to miRNA target prediction. Our discussion highlights three tools for their ease of use, reliance on relatively updated versions of miRBase, and range of capabilities, and these are DIANA-microT-CDS, miRanda-mirSVR, and TargetScan. In comparison across all miRNA target prediction tools, four main aspects of the miRNA:mRNA target interaction emerge as common features on which most target prediction is based: seed match, conservation, free energy, and site accessibility. This review explains these features and identifies how they are incorporated into currently available target prediction tools. MiRNA target prediction is a dynamic field with increasing attention on development of new analysis tools. This review attempts to provide a comprehensive assessment of these tools in a manner that is accessible across disciplines. Understanding the basis of these prediction methodologies will aid in user selection of the appropriate tools and interpretation of the tool output.

This article was submitted to Behavioral and Psychiatric Genetics, a section of the journal Frontiers in Psychiatry