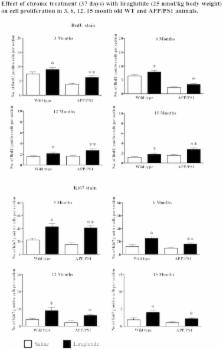 Neurogenesis is a life long process, but the rate of cell proliferation and differentiation decreases with age. In Alzheimer's patients, along with age, the presence of Aβ in the brain inhibits this process by reducing stem cell proliferation and cell differentiation. GLP-1 is a growth factor that has neuroprotective properties. GLP1 receptors are present on neuronal progenitor cells, and the GLP-1 analogue liraglutide has been shown to increase cell proliferation in an Alzheimer's disease (AD) mouse model. Here we investigated acute and chronic effects of liraglutide on progenitor cell proliferation, neuroblast differentiation and their subsequent differentiation into neurons in wild type and APP/PS-1 mice at different ages. APP/PS1 and their littermate controls, aged 3, 6, 12, 15 months were injected acutely or chronically with 25 nmol/kg liraglutide. Acute treatment with liraglutide showed an increase in cell proliferation in APP/PS1 mice, but not in controls whereas chronic treatment increased cell proliferation at all ages (BrdU and Ki67 markers). Moreover, numbers of immature neurons (DCX) were increased in both acute and chronic treated animals at all ages. Most newly generated cells differentiated into mature neurons (NeuN marker). A significant increase was observed with chronically treated 6, 12, 15 month APP/PS1 and WT groups. These results demonstrate that liraglutide, which is currently on the market as a treatment for type 2 diabetes (Victoza TM), increases neurogenesis, which may have beneficial effects in neurodegenerative disorders like AD.

Biology of incretins: GLP-1 and GIP.

Laurie L. Baggio,  Daniel Drucker (2007)
This review focuses on the mechanisms regulating the synthesis, secretion, biological actions, and therapeutic relevance of the incretin peptides glucose-dependent insulinotropic polypeptide (GIP) and glucagon-like peptide-1 (GLP-1). The published literature was reviewed, with emphasis on recent advances in our understanding of the biology of GIP and GLP-1. GIP and GLP-1 are both secreted within minutes of nutrient ingestion and facilitate the rapid disposal of ingested nutrients. Both peptides share common actions on islet beta-cells acting through structurally distinct yet related receptors. Incretin-receptor activation leads to glucose-dependent insulin secretion, induction of beta-cell proliferation, and enhanced resistance to apoptosis. GIP also promotes energy storage via direct actions on adipose tissue, and enhances bone formation via stimulation of osteoblast proliferation and inhibition of apoptosis. In contrast, GLP-1 exerts glucoregulatory actions via slowing of gastric emptying and glucose-dependent inhibition of glucagon secretion. GLP-1 also promotes satiety and sustained GLP-1-receptor activation is associated with weight loss in both preclinical and clinical studies. The rapid degradation of both GIP and GLP-1 by the enzyme dipeptidyl peptidase-4 has led to the development of degradation-resistant GLP-1-receptor agonists and dipeptidyl peptidase-4 inhibitors for the treatment of type 2 diabetes. These agents decrease hemoglobin A1c (HbA1c) safely without weight gain in subjects with type 2 diabetes. GLP-1 and GIP integrate nutrient-derived signals to control food intake, energy absorption, and assimilation. Recently approved therapeutic agents based on potentiation of incretin action provide new physiologically based approaches for the treatment of type 2 diabetes.

Neurogenesis in the dentate gyrus of the adult rat: age-related decrease of neuronal progenitor proliferation.

Hans Kuhn,  Brian F Gage,  Michael H. Dickinson (1996)
The hippocampus is one of the few areas of the rodent brain that continues to produce neurons postnatally. Neurogenesis reportedly persists in rats up to 11 months of age. Using bromodeoxyuridine (BrdU) labeling, the present study confirms that in the adult rat brain, neuronal progenitor cells divide at the border between the hilus and the granule cell layer (GCL). In adult rats, the progeny of these cells migrate into the GCL and express the neuronal markers NeuN and calbindin-D28k. However, neurogenesis was drastically reduced in aged rats. Six-to 27-month-old Fischer rats were injected intraperitoneally with BrdU to detect newborn cells in vivo and to follow their fate in the dentate gyrus. When killed 4-6 weeks after BrdU labeling, 12- to 27-month-old rats exhibited a significant decline in the density of BrdU-positive cells in the granule cell layer compared with 6-month-old controls. Decreased neurogenesis in aging rats was accompanied by reduced immunoreactivity for poly-sialylated neural cell adhesion molecule, a molecule that is involved in migration and process elongation of developing neurons. When animals were killed immediately (12 hr) after BrdU injection, significantly fewer labeled cells were observed in the GCL and adjacent subgranular zone of aged rats, indicative of a decrease in mitotic activity of neuronal precursor cells. The reduced proliferation was not attributable to a general aged-related metabolic impairment, because the density of BrdU-positive cells was not altered in other brain regions with known mitotic activity (e.g., hilus and lateral ventricle wall). The decline in neurogenesis that occurs throughout the lifespan of an animal can thus be related to a decreasing proliferation of granule cell precursors.

Henriëtte E. van der Horst,  Tiffany E. Shubert,  Chunmei Zhao … (2005)
Aging causes changes in the hippocampus that may lead to cognitive decline in older adults. In young animals, exercise increases hippocampal neurogenesis and improves learning. We investigated whether voluntary wheel running would benefit mice that were sedentary until 19 months of age. Specifically, young and aged mice were housed with or without a running wheel and injected with bromodeoxyuridine or retrovirus to label newborn cells. After 1 month, learning was tested in the Morris water maze. Aged runners showed faster acquisition and better retention of the maze than age-matched controls. The decline in neurogenesis in aged mice was reversed to 50% of young control levels by running. Moreover, fine morphology of new neurons did not differ between young and aged runners, indicating that the initial maturation of newborn neurons was not affected by aging. Thus, voluntary exercise ameliorates some of the deleterious morphological and behavioral consequences of aging.

Competing Interests: Dr. C. Holscher is an editor on PLOS ONE. This does not alter the authors' adherence to all the PLOS ONE policies on sharing data and materials.

The work was funded in part by a grant of the Alzheimer Research UK charity Trust and a Vice Chancellor Research Studentship grant to VP. The funders had no role in study design, data collection and analysis, decision to publish, or preparation of the manuscript.