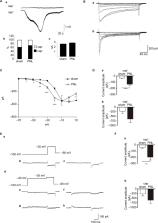 Neuropathic pain resulting from peripheral nerve lesions is a common medical condition, but current analgesics are often insufficient. The identification of key molecules involved in pathological pain processing is a prerequisite for the development of new analgesic drugs. Hyperexcitability of nociceptive DRG-neurons due to regulation of voltage-gated ion-channels is generally assumed to contribute strongly to neuropathic pain. There is increasing evidence, that T-type Ca 2+-currents and in particular the Ca v3.2 T-type-channel isoform play an important role in neuropathic pain, but experimental results are contradicting.

To clarify the role of T-type Ca 2+-channels and in particular the Ca v3.2 T-type-channel isoform in neuropathic pain.

The effect of partial sciatic nerve ligation (PNL) on pain behavior and the properties of T-type-currents in nociceptive DRG-neurons was tested in wild-type and Ca v3.2-deficient mice.

These data suggest that PNL induces an upregulation of T-Type Ca 2+-currents in capsaicin-responsive DRG-neurons mediated by an increase of a Ni 2+-insensitive current component (possibly Ca v3.1 or Ca v3.3). These findings provide relevance for the development of target specific analgesic drugs.

Edward Perez-Reyes (2002)
T-type Ca2+ channels were originally called low-voltage-activated (LVA) channels because they can be activated by small depolarizations of the plasma membrane. In many neurons Ca2+ influx through LVA channels triggers low-threshold spikes, which in turn triggers a burst of action potentials mediated by Na+ channels. Burst firing is thought to play an important role in the synchronized activity of the thalamus observed in absence epilepsy, but may also underlie a wider range of thalamocortical dysrhythmias. In addition to a pacemaker role, Ca2+ entry via T-type channels can directly regulate intracellular Ca2+ concentrations, which is an important second messenger for a variety of cellular processes. Molecular cloning revealed the existence of three T-type channel genes. The deduced amino acid sequence shows a similar four-repeat structure to that found in high-voltage-activated (HVA) Ca2+ channels, and Na+ channels, indicating that they are evolutionarily related. Hence, the alpha1-subunits of T-type channels are now designated Cav3. Although mRNAs for all three Cav3 subtypes are expressed in brain, they vary in terms of their peripheral expression, with Cav3.2 showing the widest expression. The electrophysiological activities of recombinant Cav3 channels are very similar to native T-type currents and can be differentiated from HVA channels by their activation at lower voltages, faster inactivation, slower deactivation, and smaller conductance of Ba2+. The Cav3 subtypes can be differentiated by their kinetics and sensitivity to block by Ni2+. The goal of this review is to provide a comprehensive description of T-type currents, their distribution, regulation, pharmacology, and cloning.

The vanilloid receptor: a molecular gateway to the pain pathway.

Kristen Caterina,  Michael Caterina,  David Julius … (2000)
The detection of painful stimuli occurs primarily at the peripheral terminals of specialized sensory neurons called nociceptors. These small-diameter neurons transduce signals of a chemical, mechanical, or thermal nature into action potentials and transmit this information to the central nervous system, ultimately eliciting a perception of pain or discomfort. Little is known about the proteins that detect noxious stimuli, especially those of a physical nature. Here we review recent advances in the molecular characterization of the capsaicin (vanilloid) receptor, an excitatory ion channel expressed by nociceptors, which contributes to the detection and integration of pain-producing chemical and thermal stimuli. The analysis of vanilloid receptor gene knockout mice confirms the involvement of this channel in pain sensation, as well as in hypersensitivity to noxious stimuli following tissue injury. At the same time, these studies demonstrate the existence of redundant mechanisms for the sensation of heat-evoked pain.

Edmund Talley,  Leanne L. Cribbs,  Jung-Ha Lee … (1999)
Low voltage-activated (T-type) calcium currents are observed in many central and peripheral neurons and display distinct physiological and functional properties. Using in situ hybridization, we have localized central and peripheral nervous system expression of three transcripts (alpha1G, alpha1H, and alpha1I) of the T-type calcium channel family (CaVT). Each mRNA demonstrated a unique distribution, and expression of the three genes was largely complementary. We found high levels of expression of these transcripts in regions associated with prominent T-type currents, including inferior olivary and thalamic relay neurons (which expressed alpha1G), sensory ganglia, pituitary, and dentate gyrus granule neurons (alpha1H), and thalamic reticular neurons (alpha1I and alpha1H). Other regions of high expression included the Purkinje cell layer of the cerebellum, the bed nucleus of the stria terminalis, the claustrum (alpha1G), the olfactory tubercles (alpha1H and alpha1I), and the subthalamic nucleus (alpha1I and alpha1G). Some neurons expressed high levels of all three genes, including hippocampal pyramidal neurons and olfactory granule cells. Many brain regions showed a predominance of labeling for alpha1G, including the amygdala, cerebral cortex, rostral hypothalamus, brainstem, and spinal cord. Exceptions included the basal ganglia, which showed more prominent labeling for alpha1H and alpha1I, and the olfactory bulb, the hippocampus, and the caudal hypothalamus, which showed more even levels of all three transcripts. Our results are consistent with the hypothesis that differential gene expression underlies pharmacological and physiological heterogeneity observed in neuronal T-type calcium currents, and they provide a molecular basis for the study of T-type channels in particular neurons.