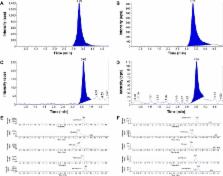 Corneal permeability of drugs is an important factor used to assess the efficacy of topical preparations. Transcorneal penetration of drugs from aqueous formulation is governed by various physiological, physiochemical, and formulation factors. In the present study, we investigated the effect of formulation factors like concentration, pH, and volume of instillation across the cornea using cassette dosing technique for ophthalmic fluoroquinolones (FQs).

Sterile cocktail formulations were prepared using four congeneric ophthalmic FQs (ofloxacin, sparfloxacin, pefloxacin mesylate, and gatifloxacin) at concentrations of 0.025%, 0.5%, and 0.1%. Each formulation was adjusted to different pH ranges (4.5, 7.0, and 8.0) and assessed for transcorneal penetration in vivo in rabbit’s cornea (n=4 eyes) at three different volumes (12.5, 25, and 50 μL). Aqueous humor was aspirated through paracentesis after applying local anesthesia at 0, 5, 15, 30, 60, 120, and 240 minutes postdosing. The biosamples collected from a total of 27 groups were analyzed using liquid chromatography–tandem mass spectroscopy to determine transcorneal permeability of all four FQs individually.

The study concludes that formulation factors showed discernible effect on transcorneal permeation; therefore, due emphasis should be given on drug development and design of ophthalmic formulation.

Permeability of cornea, sclera, and conjunctiva: a literature analysis for drug delivery to the eye.

Michael J. Noonan,  John M. Prausnitz (1998)
The objective of this study was to collect a comprehensive database of ocular tissue permeability measurements found in a review of the literature to guide models for drug transport in the eye. Well over 300 permeability measurements of cornea, sclera, and conjunctiva, as well as corneal epithelium, stroma, and endothelium, were obtained for almost 150 different compounds from more than 40 different studies. In agreement with previous work, the corneal epithelium was shown generally to control transcorneal transport, where corneal stroma and endothelium contribute significantly only to the barrier for small, lipophilic compounds. In addition, other quantitative comparisons between ocular tissues are presented. This study provides an extensive database of ocular tissue permeabilities, which should be useful for future development and validation of models to predict rates of drug delivery to the eye.

Andrew D. A. C. Smith,  Keith S. Kaye,  Malcolm B Hart … (2000)
The fluoroquinolones have become widely used antibacterial agents in the treatment of ocular infections, with topical, intravitreal and systemic routes of administration being used. In general, fluoroquinolones (such as ciprofloxacin, ofloxacin, lomefloxacin and norfloxacin) have good activity against gram-negative and gram-positive bacteria. Therapeutic concentrations are achieved in the cornea after topical administration so that the fluoroqinolones have largely replaced combination therapy for the treatment of bacterial keratitis. However, a second line agent is needed when resistance is likely, such as in disease caused by streptococcal species. Reversal of resistance to quinolones may not occur with withdrawal of the antibacterial. This stresses the importance of prudent prescribing to reduce the occurrence of resistance to quinolones. When used in therapeutic topical dosages, corneal toxicity does not occur. Similarly, retinal toxicity is not seen when fluoroquinolones are used at therapeutic dosages, systemically or topically. Corneal precipitation occurs, particularly with ciprofloxacin and to a lesser extent norfloxacin, but does not appear to interfere with healing. In the treatment of endophthalmitis there is reasonable penetration of systemic fluoroquinolones into the vitreous but sufficiently high concentrations to reach the minimum inhibitory concentration for 90% of isolates (MIC90) of all important micro-organisms may not be guaranteed. Systemic administration may be useful for prophylaxis after ocular trauma.

Paige K. Thompson (2007)
The ocular toxicity of fluoroquinolones and the risks of their use in the treatment of ocular infection were reviewed. Systematic identification, selection, review and synthesis of published English-language studies relating to fluoroquinolone use and safety in animals and humans was conducted. Although not free of complications, fluoroquinolones are generally safe when used to treat ocular infection. Ocular toxicity appears to be dose-dependent and results from class-effects and specific fluoroquinolone structures. Phototoxicity and neurotoxicity have been reported, and toxic effects on ocular collagen may be associated with Achilles tendinopathy. Corneal precipitation may provide an advantageous drug depot but delay healing and result in corneal perforation in approximately 10% of cases. Although human toxicity studies are limited, the current recommended dose for intracameral injection of ciprofloxacin is less than 25 microg. Intravitreal injections of ciprofloxacin 100 microg, ofloxacin 50 microg/mL, trovafloxacin 25 microg or less, moxifloxacin 160 microg/0.1 mL or less and pefloxacin 200 microg/0.1 mL are considered safe.