A complete time-calibrated multi-gene phylogeny of the European butterflies 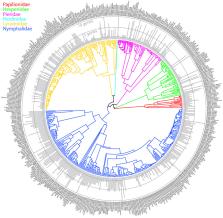 With the aim of supporting ecological analyses in butterflies, the third most species-rich superfamily of Lepidoptera , this paper presents the first time-calibrated phylogeny of all 496 extant butterfly species in Europe, including 18 very localised endemics for which no public DNA sequences had been available previously. It is based on a concatenated alignment of the mitochondrial gene COI and up to eleven nuclear gene fragments, using Bayesian inferences of phylogeny. To avoid analytical biases that could result from our region-focussed sampling, our European tree was grafted upon a global genus-level backbone butterfly phylogeny for analyses. In addition to a consensus tree, the posterior distribution of trees and the fully concatenated alignment are provided for future analyses. Altogether a complete phylogenetic framework of European butterflies for use by the ecological and evolutionary communities is presented.

Consequences of climate change on the tree of life in Europe.

Isabelle Boulangeat,  Cristina Roquet,  Bruno Lafourcade … (2011)
Many species are projected to become vulnerable to twenty-first-century climate changes, with consequent effects on the tree of life. If losses were not randomly distributed across the tree of life, climate change could lead to a disproportionate loss of evolutionary history. Here we estimate the consequences of climate change on the phylogenetic diversities of plant, bird and mammal assemblages across Europe. Using a consensus across ensembles of forecasts for 2020, 2050 and 2080 and high-resolution phylogenetic trees, we show that species vulnerability to climate change clusters weakly across phylogenies. Such phylogenetic signal in species vulnerabilities does not lead to higher loss of evolutionary history than expected with a model of random extinctions. This is because vulnerable species have neither fewer nor closer relatives than the remaining clades. Reductions in phylogenetic diversity will be greater in southern Europe, and gains are expected in regions of high latitude or altitude. However, losses will not be offset by gains and the tree of life faces a trend towards homogenization across the continent.

Christine N Meynard,  Wilfried Thuiller,  Vincent Devictor … (2012)
Ecophylogenetics can be viewed as an emerging fusion of ecology, biogeography and macroevolution. This new and fast-growing field is promoting the incorporation of evolution and historical contingencies into the ecological research agenda through the widespread use of phylogenetic data. Including phylogeny into ecological thinking represents an opportunity for biologists from different fields to collaborate and has provided promising avenues of research in both theoretical and empirical ecology, towards a better understanding of the assembly of communities, the functioning of ecosystems and their responses to environmental changes. The time is ripe to assess critically the extent to which the integration of phylogeny into these different fields of ecology has delivered on its promise. Here we review how phylogenetic information has been used to identify better the key components of species interactions with their biotic and abiotic environments, to determine the relationships between diversity and ecosystem functioning and ultimately to establish good management practices to protect overall biodiversity in the face of global change. We evaluate the relevance of information provided by phylogenies to ecologists, highlighting current potential weaknesses and needs for future developments. We suggest that despite the strong progress that has been made, a consistent unified framework is still missing to link local ecological dynamics to macroevolution. This is a necessary step in order to interpret observed phylogenetic patterns in a wider ecological context. Beyond the fundamental question of how evolutionary history contributes to shape communities, ecophylogenetics will help ecology to become a better integrative and predictive science. © 2012 CNRS. Biological Reviews © 2012 Cambridge Philosophical Society.

Martin Wiemers,  Konrad Fiedler (2007)
Background DNA barcoding, i.e. the use of a 648 bp section of the mitochondrial gene cytochrome c oxidase I, has recently been promoted as useful for the rapid identification and discovery of species. Its success is dependent either on the strength of the claim that interspecific variation exceeds intraspecific variation by one order of magnitude, thus establishing a "barcoding gap", or on the reciprocal monophyly of species. Results We present an analysis of intra- and interspecific variation in the butterfly family Lycaenidae which includes a well-sampled clade (genus Agrodiaetus) with a peculiar characteristic: most of its members are karyologically differentiated from each other which facilitates the recognition of species as reproductively isolated units even in allopatric populations. The analysis shows that there is an 18% overlap in the range of intra- and interspecific COI sequence divergence due to low interspecific divergence between many closely related species. In a Neighbour-Joining tree profile approach which does not depend on a barcoding gap, but on comprehensive sampling of taxa and the reciprocal monophyly of species, at least 16% of specimens with conspecific sequences in the profile were misidentified. This is due to paraphyly or polyphyly of conspecific DNA sequences probably caused by incomplete lineage sorting. Conclusion Our results indicate that the "barcoding gap" is an artifact of insufficient sampling across taxa. Although DNA barcodes can help to identify and distinguish species, we advocate using them in combination with other data, since otherwise there would be a high probability that sequences are misidentified. Although high differences in DNA sequences can help to identify cryptic species, a high percentage of well-differentiated species has similar or even identical COI sequences and would be overlooked in an isolated DNA barcoding approach.