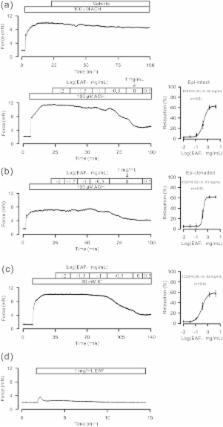 Because of the serious side effects of the currently used bronchodilators, new compounds with similar functions must be developed. We screened several herbs and found that Polygonum aviculare L. contains ingredients that inhibit the precontraction of mouse and human airway smooth muscle (ASM). High K +-induced precontraction in ASM was completely inhibited by nifedipine, a selective blocker of L-type voltage-dependent Ca 2+ channels (LVDCCs). However, nifedipine only partially reduced the precontraction induced by acetylcholine chloride (ACH). Additionally, the ACH-induced precontraction was partly reduced by pyrazole-3 (Pyr3), a selective blocker of TRPC3 and stromal interaction molecule (STIM)/Orai channels. These channel-mediated currents were inhibited by the compounds present in P. aviculare extracts, suggesting that this inhibition was mediated by LVDCCs, TRPC3 and/or STIM/Orai channels. Moreover, these channel-mediated currents were inhibited by quercetin, which is present in P. aviculare extracts. Furthermore, quercetin inhibited ACH-induced precontraction in ASM. Overall, our data indicate that the ethyl acetate fraction of P. aviculare and quercetin can inhibit Ca 2+-permeant LVDCCs, TRPC3 and STIM/Orai channels, which inhibits the precontraction of ASM. These findings suggest that P. aviculare could be used to develop new bronchodilators to treat obstructive lung diseases such as asthma and chronic obstructive pulmonary disease.

The Cellular and Molecular Basis of Bitter Tastant-Induced Bronchodilation

H Schleifer,  B Doleschal,  M Lichtenegger … (2012)
Background and purpose Pyrazole derivatives have recently been suggested as selective blockers of transient receptor potential cation (TRPC) channels but their ability to distinguish between the TRPC and Orai pore complexes is ill-defined. This study was designed to characterize a series of pyrazole derivatives in terms of TRPC/Orai selectivity and to delineate consequences of selective suppression of these pathways for mast cell activation. Experimental approach Pyrazoles were generated by microwave-assisted synthesis and tested for effects on Ca2+ entry by Fura-2 imaging and membrane currents by patch-clamp recording. Experiments were performed in HEK293 cells overexpressing TRPC3 and in RBL-2H3 mast cells, which express classical store-operated Ca2+ entry mediated by Orai channels. The consequences of inhibitory effects on Ca2+ signalling in RBL-2H3 cells were investigated at the level of both degranulation and nuclear factor of activated T-cells activation. Key Results Pyr3, a previously suggested selective inhibitor of TRPC3, inhibited Orai1- and TRPC3-mediated Ca2+ entry and currents as well as mast cell activation with similar potency. By contrast, Pyr6 exhibited a 37-fold higher potency to inhibit Orai1-mediated Ca2+ entry as compared with TRPC3-mediated Ca2+ entry and potently suppressed mast cell activation. The novel pyrazole Pyr10 displayed substantial selectivity for TRPC3-mediated responses (18-fold) and the selective block of TRPC3 channels by Pyr10 barely affected mast cell activation. Conclusions and Implications The pyrazole derivatives Pyr6 and Pyr10 are able to distinguish between TRPC and Orai-mediated Ca2+ entry and may serve as useful tools for the analysis of cellular functions of the underlying Ca2+ channels.

Dale D. Tang (2015)
Asthma is characterized by airway hyperresponsiveness and airway remodeling, which are largely attributed to increased airway smooth muscle contractility and cell proliferation. It is known that both chemical and mechanical stimulation regulates smooth muscle contraction. Recent studies suggest that contractile activation and mechanical stretch induce actin cytoskeletal remodeling in smooth muscle. However, the mechanisms that control actin cytoskeletal reorganization are not completely elucidated. This review summarizes our current understanding regarding how actin-associated proteins may regulate remodeling of the actin cytoskeleton in airway smooth muscle. In particular, there is accumulating evidence to suggest that Abelson tyrosine kinase (Abl) plays a critical role in regulating airway smooth muscle contraction and cell proliferation in vitro, and airway hyperresponsiveness and remodeling in vivo. These studies indicate that Abl may be a novel target for the development of new therapy to treat asthma.