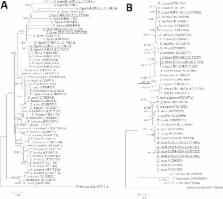 Human Sarcocystis infections are known to be caused by the ingestion of raw or undercooked beef or pork containing mature sarcocysts of Sarcocystis hominis or S. suihominis, respectively. In addition, several cases of parasitic food poisoning in Japan have recently been reported after consumption of raw horsemeat containing sarcocysts of S. fayeri. In this study, the presence of sarcocysts in 28 horsemeat and 121 beef samples collected in Tokyo was investigated. Sarcocysts of S. fayeri were found in 16 horsemeat samples. Sarcocysts of S. hominis were not detected in beef samples, while sarcocysts of S. cruzi were detected in 60 beef samples. In addition, S. hirsuta and S. bovini were isolated only from New Zealand beef samples. Bradyzoites in sarcocysts collected from 62/73 sarcocyst-positive refrigerated horsemeat and beef samples were determined to be viable. Molecular analysis of S. fayeri 18S rRNA gene sequences revealed that intraspecific variation among eight individual bradyzoites from a single sarcocyst was as high as 9.8%. In contrast, mitochondrial cytochrome c oxidase subunit 1 (mtDNA cox1) gene sequences from the six fragments of a single sarcocyst were 100% identical. Sarcocysts of S. bovini isolated from beef also exhibited intraspecific variation in 18S rRNA gene sequences and had to be cloned before sequencing, while mtDNA cox1 gene sequences were obtained by direct sequencing. Therefore, we conclude that molecular analysis of the mtDNA cox1 gene is the most useful for identification of Sarcocystis species. This study provides the first published partial sequence of the S. fayeri mtDNA cox1 gene.

Ronald Fayer,  Douglas H Esposito,  Jitender Dubey (2015)
Recurrent outbreaks of muscular sarcocystosis among tourists visiting islands in Malaysia have focused international attention on sarcocystosis, a disease once considered rare in humans. Sarcocystis species require two hosts, definitive and intermediate, to complete their life cycle. Humans can serve as definitive hosts, with intestinal sarcocystosis for two species acquired from eating undercooked meat: Sarcocystis hominis, from beef, and Sarcocystis suihominis, from pork. Symptoms such as nausea, stomachache, and diarrhea vary widely depending on the number of cysts ingested but appear more severe with pork than with beef. Humans serve as intermediate hosts for Sarcocystis nesbitti, a species with a reptilian definitive host, and possibly other unidentified species, acquired by ingesting sporocysts from feces-contaminated food or water and the environment; infections have an early phase of development in vascular endothelium, with illness that is difficult to diagnose; clinical signs include fever, headache, and myalgia. Subsequent development of intramuscular cysts is characterized by myositis. Presumptive diagnosis based on travel history to tropical regions, elevated serum enzyme levels, and eosinophilia is confirmed by finding sarcocysts in muscle biopsy specimens. There is no vaccine or confirmed effective antiparasitic drug for muscular sarcocystosis, but anti-inflammatory drugs may reduce symptoms. Prevention strategies are also discussed.

Bjørn Gjerde (2016)
About 200 individual sarcocysts were excised from 12 samples of cattle beef from five countries (Argentina, Brazil, Germany, New Zealand, Uruguay) and tentatively identified to species or cyst type on the basis of their size and shape and cyst wall morphology. Genomic DNA was extracted from 147 of these sarcocysts and used initially for PCR amplification and sequencing of the partial mitochondrial cytochrome c oxidase subunit I gene (cox1) in order to identify the sarcocysts to species and/or sequence type. In addition, seven Sarcocystis sinensis-like sarcocysts collected from the oesophagus of water buffaloes in Egypt were examined at cox1 for comparative purposes. Based on the results from the cox1 marker, selected sarcocyst isolates from both hosts were further characterised at one to three regions of the nuclear ribosomal (r) DNA unit, i.e. the complete 18S rRNA gene, the complete internal transcribed spacer 1 (ITS1) region and the partial 28S rRNA gene. This was done in order to compare the results with previous molecular identifications based on 18S rRNA gene sequences and to evaluate the utility of these regions for species delimitations and phylogenetic inferences. On the basis of sarcocyst morphology and molecular data, primarily the cox1 sequences, four Sarcocystis spp. were identified in the samples of cattle beef. Twenty-two microscopic sarcocysts (1 × 0.1 mm) with hair-like protrusions were assigned to Sarcocystis cruzi, 56 macroscopic sarcocysts (3-8 × 0.5 mm) with finger-like protrusions were assigned to Sarcocystis hirsuta and 45 and 24 microscopic sarcocysts (1-3 × 0.1-0.2 mm) with finger-like protrusions were assigned to Sarcocystis bovifelis and Sarcocystis bovini n. sp., respectively. Sarcocysts of S. cruzi were identified in samples of beef from Argentina and Uruguay; sarcocysts of S. hirsuta in samples from Argentina, Brazil, Germany and New Zealand; sarcocysts of S. bovifelis in samples from Argentina and Germany; and sarcocysts of S. bovini in samples from Argentina and New Zealand. The microscopic sarcocysts from water buffaloes were confirmed to belong to S. sinensis. The cox1 sequences of S. bovifelis and S. bovini, respectively, shared an identity of 93-94 % with each other, and these sequences shared an identity of 89-90 % with cox1 of S. sinensis. In contrast, the intraspecific sequence identity was 98.4-100 % (n = 45), 99.3-100 % (n = 24) and 99.5-100 % (n = 7) for sequences of S. bovifelis, S. bovini and S. sinensis, respectively. In each of the latter three species, an aberrant type of cox1 sequences was also identified, which was only 91-92 % identical with the predominant cox1 type of the same species and about 98 % identical with the aberrant types of the two other species. These aberrant cox1 sequences are believed to represent non-functional nuclear copies of the mitochondrial genes (numts or pseudogenes). They might be used as additional markers to separate the three species from each other. Sequencing of a considerable number of clones of S. bovifelis, S. bovini and S. sinensis from each of the three regions of the rDNA unit revealed intraspecific sequence variation in all loci in all species and particularly in the ITS1 locus (78-100 % identity). As regards the 18S rRNA gene, it was possible to separate the three species from each other on the basis of a few consistent nucleotide differences in the less variable 3' end half of the gene. A comparison of the new sequences with GenBank sequences obtained from S. sinensis-like sarcocysts in cattle in other studies indicated that previous sequences derived from cattle in Germany and Austria belonged to S. bovifelis, whereas those derived from cattle in China belonged to S. bovini. On the basis of the new 28S rRNA sequences, it was possible to separate S. sinensis from S. bovifelis and S. bovini, whereas the latter two species could not be separated from each other. Based on ITS1 sequences, the three species were indistinguishable. Phylogenetic analysis using maximum parsimony placed with fairly high support cox1 sequences of S. bovifelis, S. bovini and S. sinensis, respectively, into three monophyletic clusters, with S. bovifelis and S. bovini being a sister group to S. sinensis. In contrast, phylogenies based on each of the three regions of the rDNA unit did not separate sequences of the three species completely from each other. Characterisation of cox1 of 56 isolates of S. hirsuta from four countries revealed only 13 haplotypes and an intraspecific sequence identity of 99.3-100 %. In the three regions of the rDNA unit, there was more extensive sequence variation, particularly in the ITS1 region. The 22 cox1 sequences of S. cruzi displayed a moderate intraspecific variation (98.6-100 %), whereas there was no variation at the 18S rRNA gene among 10 sequenced isolates. Sequencing of 16 clones of the partial 28S rRNA gene of S. cruzi yielded two markedly different sequence types, having an overall sequence identity of 95-100 %.

Analysis of the 18S rRNA genes of Sarcocystis species suggests that the morphologically similar organisms from cattle and water buffalo should be considered the same species.