A Computational Tool for Quantitative Analysis of Vascular Networks 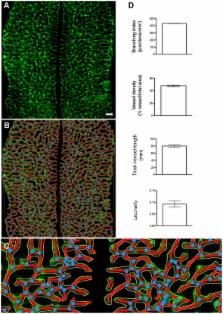 Angiogenesis is the generation of mature vascular networks from pre-existing vessels. Angiogenesis is crucial during the organism' development, for wound healing and for the female reproductive cycle. Several murine experimental systems are well suited for studying developmental and pathological angiogenesis. They include the embryonic hindbrain, the post-natal retina and allantois explants. In these systems vascular networks are visualised by appropriate staining procedures followed by microscopical analysis. Nevertheless, quantitative assessment of angiogenesis is hampered by the lack of readily available, standardized metrics and software analysis tools. Non-automated protocols are being used widely and they are, in general, time - and labour intensive, prone to human error and do not permit computation of complex spatial metrics. We have developed a light-weight, user friendly software, AngioTool, which allows for quick, hands-off and reproducible quantification of vascular networks in microscopic images. AngioTool computes several morphological and spatial parameters including the area covered by a vascular network, the number of vessels, vessel length, vascular density and lacunarity. In addition, AngioTool calculates the so-called “branching index” (branch points / unit area), providing a measurement of the sprouting activity of a specimen of interest. We have validated AngioTool using images of embryonic murine hindbrains, post-natal retinas and allantois explants. AngioTool is open source and can be downloaded free of charge.

C J Vlahos, W Matter, K Hui … (1994)
Phosphatidylinositol (PtdIns) 3-kinase is an enzyme implicated in growth factor signal transduction by associating with receptor and nonreceptor tyrosine kinases, including the platelet-derived growth factor receptor. Inhibitors of PtdIns 3-kinase could potentially give a better understanding of the function and regulatory mechanisms of the enzyme. Quercetin, a naturally occurring bioflavinoid, was previously shown to inhibit PtdIns 3-kinase with an IC50 of 1.3 microgram/ml (3.8 microM); inhibition appeared to be directed at the ATP-binding site of the kinase. Analogs of quercetin were investigated as PtdIns 3-kinase inhibitors, with the most potent ones exhibiting IC50 values in the range of 1.7-8.4 micrograms/ml. In contrast, genistein, a potent tyrosine kinase inhibitor of the isoflavone class, did not inhibit PtdIns 3-kinase significantly (IC50 > 30 micrograms/ml). Since quercetin has also been shown to inhibit other PtdIns and protein kinases, other chromones were evaluated as inhibitors of PtdIns 3-kinase without affecting PtdIns 4-kinase or selected protein kinases. One such compound, 2-(4-morpholinyl)-8-phenyl-4H-1-benzopyran-4-one (also known as 2-(4-morpholinyl)-8-phenylchromone, LY294002), completely and specifically abolished PtdIns 3-kinase activity (IC50 = 0.43 microgram/ml; 1.40 microM) but did not inhibit PtdIns 4-kinase or tested protein and lipid kinases. Analogs of LY294002 demonstrated a very selective structure-activity relationship, with slight changes in structure causing marked decreases in inhibition. LY294002 was shown to completely abolish PtdIns 3-kinase activity in fMet-Leu-Phe-stimulated human neutrophils, as well as inhibit proliferation of smooth muscle cells in cultured rabbit aortic segments. Since PtdIns 3-kinase appears to be centrally involved with growth factor signal transduction, the development of specific inhibitors against the kinase may be beneficial in the treatment of proliferative diseases as well as in elucidating the biological role of the kinase in cellular proliferation and growth factor response.

A pharmacological map of the PI3-K family defines a role for p110alpha in insulin signaling.

Zachary Knight, Beatriz Angela González, Morri Feldman … (2006)
Phosphoinositide 3-kinases (PI3-Ks) are an important emerging class of drug targets, but the unique roles of PI3-K isoforms remain poorly defined. We describe here an approach to pharmacologically interrogate the PI3-K family. A chemically diverse panel of PI3-K inhibitors was synthesized, and their target selectivity was biochemically enumerated, revealing cryptic homologies across targets and chemotypes. Crystal structures of three inhibitors bound to p110gamma identify a conformationally mobile region that is uniquely exploited by selective compounds. This chemical array was then used to define the PI3-K isoforms required for insulin signaling. We find that p110alpha is the primary insulin-responsive PI3-K in cultured cells, whereas p110beta is dispensable but sets a phenotypic threshold for p110alpha activity. Compounds targeting p110alpha block the acute effects of insulin treatment in vivo, whereas a p110beta inhibitor has no effect. These results illustrate systematic target validation using a matrix of inhibitors that span a protein family.

Pharmacological properties of Y-27632, a specific inhibitor of rho-associated kinases.

T Ishizaki, M Uehata, I Tamechika … (2000)
Y-27632 [(+)-(R)-trans-4-(1-aminoethyl)-N-(4-pyridyl)cyclohexanecarboxamide++ + dihydrochloride] is widely used as a specific inhibitor of the Rho-associated coiled-coil forming protein serine/threonine kinase (ROCK) family of protein kinases. This study examined the inhibition mechanism and profile of actions of Y-27632 and a related compound, Y-30141 [(+)-(R)-trans- 4-(1-aminoethyl)-N-(1H-pyrrolo[2, 3-b]pyridin-4-yl)cyclohexan-ecarboxamide dihydrochloride]. Y-27632 and Y-30141 inhibited the kinase activity of both ROCK-I and ROCK-II in vitro, and this inhibition was reversed by ATP in a competitive manner. This suggests that these compounds inhibit the kinases by binding to the catalytic site. Their affinities for ROCK kinases as determined by K(i) values were at least 20 to 30 times higher than those for two other Rho effector kinases, citron kinase and protein kinase PKN. [(3)H]Y-30141 was taken up by cells in a temperature- and time-dependent and saturable manner, and this uptake was competed with unlabeled Y-27632. No concentrated accumulation was found, suggesting that the uptake is a carrier-mediated facilitated diffusion. Y-27632 abolished stress fibers in Swiss 3T3 cells at 10 microM, but the G(1)-S phase transition of the cell cycle and cytokinesis were little affected at this concentration. Y-30141 was 10 times more potent than Y-27632 in inhibiting the kinase activity and stress fiber formation, and it caused significant delay in the G(1)-S transition and inhibition of cytokinesis at 10 microM.