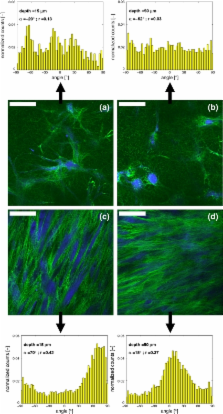 Load-bearing soft tissues predominantly consist of collagen and exhibit anisotropic, non-linear visco-elastic behavior, coupled to the organization of the collagen fibers. Mimicking native mechanical behavior forms a major goal in cardiovascular tissue engineering. Engineered tissues often lack properly organized collagen and consequently do not meet in vivo mechanical demands. To improve collagen architecture and mechanical properties, mechanical stimulation of the tissue during in vitro tissue growth is crucial. This study describes the evolution of collagen fiber orientation with culture time in engineered tissue constructs in response to mechanical loading. To achieve this, a novel technique for the quantification of collagen fiber orientation is used, based on 3D vital imaging using multiphoton microscopy combined with image analysis. The engineered tissue constructs consisted of cell-seeded biodegradable rectangular scaffolds, which were either constrained or intermittently strained in longitudinal direction. Collagen fiber orientation analyses revealed that mechanical loading induced collagen alignment. The alignment shifted from oblique at the surface of the construct towards parallel to the straining direction in deeper tissue layers. Most importantly, intermittent straining improved and accelerated the alignment of the collagen fibers, as compared to constraining the constructs. Both the method and the results are relevant to create and monitor load-bearing tissues with an organized anisotropic collagen network.

Li Gao,  R. Langer,  Geoffrey W. Abbott … (1999)
A tissue engineering approach was developed to produce arbitrary lengths of vascular graft material from smooth muscle and endothelial cells that were derived from a biopsy of vascular tissue. Bovine vessels cultured under pulsatile conditions had rupture strengths greater than 2000 millimeters of mercury, suture retention strengths of up to 90 grams, and collagen contents of up to 50 percent. Cultured vessels also showed contractile responses to pharmacological agents and contained smooth muscle cells that displayed markers of differentiation such as calponin and myosin heavy chains. Tissue-engineered arteries were implanted in miniature swine, with patency documented up to 24 days by digital angiography.

Improved bone structure and strength after long-term mechanical loading is greatest if loading is separated into short bouts.

S A Robling,  B Burr,  Felecia M Hinant … (2002)
Mechanical loading presents a potent osteogenic stimulus to bone cells, but bone cells desensitize rapidly to mechanical stimulation. Resensitization must occur before the cells can transduce future mechanical signals effectively. Previous experiments show that mechanical loading protocols are more osteogenic if the load cycles are divided into several discrete bouts, separated by several hours, than if the cycles are applied in a single uninterrupted bout. We investigated the effect of discrete mechanical loading bouts on structure and biomechanical properties of the rat ulna after 16 weeks of loading. The right ulnas of 26 adult female rats were subjected to 360 load cycles/day, delivered in a haversine waveform at 17 N peak force, 3 days/week for 16 weeks. One-half of the animals (n = 13) were administered all 360 daily cycles in a single uninterrupted bout (360 x 1); the other half were administered 90 cycles four times per day (90 x 4), with 3 h between bouts. A nonloaded baseline control (BLC) group and an age-matched control (AMC) group (n = 9/group) were included in the experiment. The following measurements were collected after death: in situ mechanical strain at the ulna midshaft; ulnar length; maximum and minimum second moments of area (I(MAx) and I(MIN)) along the entire length of the ulnas (1-mm increments); and ultimate force, energy to failure, and stiffness of whole ulnas. Qualitative observations of bone morphology were made from whole bone images reconstructed from microcomputed tomography (microCT) slices. Loading according to the 360 x 1 and 90 x 4 schedules improved ultimate force by 64% and 87%, energy to failure by 94% and 165%, I(MAX) by 13% and 26% (in the middistal diaphysis), I(MIN) by 69% and 96% (in the middistal diaphysis), and reduced peak mechanical strain by 40% and 36%, respectively. The large increases in biomechanical properties occurred despite very low 5-12% gains in areal bone mineral density (aBMD) and bone mineral content (BMC). Mechanical loading is more effective in enhancing bone biomechanical and structural properties if the loads are applied in discrete bouts, separated by recovery periods (90 x 4 schedule), than if the loads are applied in a single session (360 x 1). Modest increases in aBMD and BMC can improve biomechanical properties substantially if the new bone formation is localized to the most biomechanically relevant sites, as occurs during load-induced bone formation.

George Vito,  Colin Black,  R M Nerem … (2000)
Dynamic mechanical conditioning is investigated as a means of improving the mechanical properties of tissue-engineered blood vessel constructs composed of living cells embedded in a collagen-gel scaffold. This approach attempts to elicit a unique response from the embedded cells so as to reorganize their surrounding matrix, thus improving the overall mechanical stability of the constructs. Mechanical conditioning, in the form of cyclic strain, was applied to the tubular constructs at a frequency of 1 Hz for 4 and 8 days. The response to conditioning thus evinced involved increased contraction and mechanical strength, as compared to statically cultured controls. Significant increases in ultimate stress and material modulus were seen over an 8 day culture period. Accompanying morphological changes showed increased circumferential orientation in response to the cyclic stimulus. We conclude that dynamic mechanical conditioning during tissue culture leads to an improvement in the properties of tissue-engineered blood vessel constructs in terms of mechanical strength and histological organization. This concept, in conjunction with a proper biochemical environment, could present a better model for engineering vascular constructs.