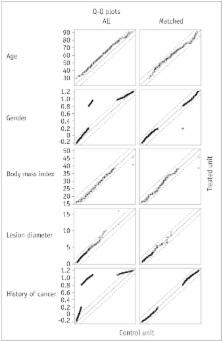 A critical appraisal of propensity-score matching in the medical literature between 1996 and 2003.

P. Austin (2008)
Propensity-score methods are increasingly being used to reduce the impact of treatment-selection bias in the estimation of treatment effects using observational data. Commonly used propensity-score methods include covariate adjustment using the propensity score, stratification on the propensity score, and propensity-score matching. Empirical and theoretical research has demonstrated that matching on the propensity score eliminates a greater proportion of baseline differences between treated and untreated subjects than does stratification on the propensity score. However, the analysis of propensity-score-matched samples requires statistical methods appropriate for matched-pairs data. We critically evaluated 47 articles that were published between 1996 and 2003 in the medical literature and that employed propensity-score matching. We found that only two of the articles reported the balance of baseline characteristics between treated and untreated subjects in the matched sample and used correct statistical methods to assess the degree of imbalance. Thirteen (28 per cent) of the articles explicitly used statistical methods appropriate for the analysis of matched data when estimating the treatment effect and its statistical significance. Common errors included using the log-rank test to compare Kaplan-Meier survival curves in the matched sample, using Cox regression, logistic regression, chi-squared tests, t-tests, and Wilcoxon rank sum tests in the matched sample, thereby failing to account for the matched nature of the data. We provide guidelines for the analysis and reporting of studies that employ propensity-score matching. Copyright (c) 2007 John Wiley & Sons, Ltd.

A comparison of the ability of different propensity score models to balance measured variables between treated and untreated subjects: a Monte Carlo study.

Paul M Robins,  Judith R Glynn,  Edward Chan … (2006)
Observational studies often provide the only available information about treatment effects. Control of confounding, however, remains challenging. The authors compared five methods for evaluating the effect of tissue plasminogen activator on death among 6,269 ischemic stroke patients registered in a German stroke registry: multivariable logistic regression, propensity score-matched analysis, regression adjustment with the propensity score, and two propensity score-based weighted methods-one estimating the treatment effect in the entire study population (inverse-probability-of-treatment weights), another in the treated population (standardized-mortality-ratio weights). Between 2000 and 2001, 212 patients received tissue plasminogen activator. The crude odds ratio between tissue plasminogen activator and death was 3.35 (95% confidence interval: 2.28, 4.91). The adjusted odds ratio depended strongly on the adjustment method, ranging from 1.11 (95% confidence interval: 0.67, 1.84) for the standardized-mortality-ratio weighted to 10.77 (95% confidence interval: 2.47, 47.04) for the inverse-probability-of-treatment-weighted analysis. For treated patients with a low propensity score, risks of dying were high. Exclusion of patients with a propensity score of <5% yielded comparable odds ratios of approximately 1 for all methods. High levels of nonuniform treatment effect render summary estimates very sensitive to the weighting system explicit or implicit in an adjustment technique. Researchers need to be clear about the population for which an overall treatment estimate is most suitable.