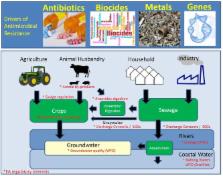 Philip S. Levin,  Sumanth Gandra,  Jacobus P. van Wouwe … (2014)
Antibiotic drug consumption is a major driver of antibiotic resistance. Variations in antibiotic resistance across countries are attributable, in part, to different volumes and patterns for antibiotic consumption. We aimed to assess variations in consumption to assist monitoring of the rise of resistance and development of rational-use policies and to provide a baseline for future assessment. With use of sales data for retail and hospital pharmacies from the IMS Health MIDAS database, we reviewed trends for consumption of standard units of antibiotics between 2000 and 2010 for 71 countries. We used compound annual growth rates to assess temporal differences in consumption for each country and Fourier series and regression methods to assess seasonal differences in consumption in 63 of the countries. Between 2000 and 2010, consumption of antibiotic drugs increased by 36% (from 54 083 964 813 standard units to 73 620 748 816 standard units). Brazil, Russia, India, China, and South Africa accounted for 76% of this increase. In most countries, antibiotic consumption varied significantly with season. There was increased consumption of carbapenems (45%) and polymixins (13%), two last-resort classes of antibiotic drugs. The rise of antibiotic consumption and the increase in use of last-resort antibiotic drugs raises serious concerns for public health. Appropriate use of antibiotics in developing countries should be encouraged. However, to prevent a striking rise in resistance in low-income and middle-income countries with large populations and to preserve antibiotic efficacy worldwide, programmes that promote rational use through coordinated efforts by the international community should be a priority. US Department of Homeland Security, Bill & Melinda Gates Foundation, US National Institutes of Health, Princeton Grand Challenges Program. Copyright © 2014 Elsevier Ltd. All rights reserved.

Vanessa D’Costa,  Christine E. King,  Lindsay Kalan … (2011)
The discovery of antibiotics more than 70 years ago initiated a period of drug innovation and implementation in human and animal health and agriculture. These discoveries were tempered in all cases by the emergence of resistant microbes. This history has been interpreted to mean that antibiotic resistance in pathogenic bacteria is a modern phenomenon; this view is reinforced by the fact that collections of microbes that predate the antibiotic era are highly susceptible to antibiotics. Here we report targeted metagenomic analyses of rigorously authenticated ancient DNA from 30,000-year-old Beringian permafrost sediments and the identification of a highly diverse collection of genes encoding resistance to β-lactam, tetracycline and glycopeptide antibiotics. Structure and function studies on the complete vancomycin resistance element VanA confirmed its similarity to modern variants. These results show conclusively that antibiotic resistance is a natural phenomenon that predates the modern selective pressure of clinical antibiotic use. © 2011 Macmillan Publishers Limited. All rights reserved

Comprehensive evaluation of antibiotics emission and fate in the river basins of China: source analysis, multimedia modeling, and linkage to bacterial resistance.

Qian-Qian Zhang,  Guang-Guo Ying,  Chang-Gui Pan … (2015)
Antibiotics are widely used in humans and animals, but there is a big concern about their negative impacts on ecosystem and human health after use. So far there is a lack of information on emission inventory and environmental fate of antibiotics in China. We studied national consumption, emissions, and multimedia fate of 36 frequently detected antibiotics in China by market survey, data analysis, and level III fugacity modeling tools. Based on our survey, the total usage for the 36 chemicals was 92700 tons in 2013, an estimated 54000 tons of the antibiotics was excreted by human and animals, and eventually 53800 tons of them entered into the receiving environment following various wastewater treatments. The fugacity model successfully predicted environmental concentrations (PECs) in all 58 river basins of China, which are comparable to the reported measured environmental concentrations (MECs) available in some basins. The bacterial resistance rates in the hospitals and aquatic environments were found to be related to the PECs and antibiotic usages, especially for those antibiotics used in the most recent period. This is the first comprehensive study which demonstrates an alarming usage and emission of various antibiotics in China.

This article was submitted to Antimicrobials, Resistance and Chemotherapy, a section of the journal Frontiers in Microbiology