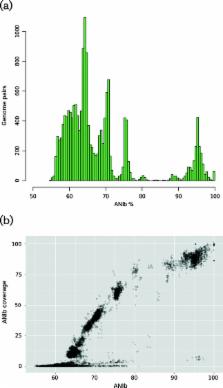 In Bacteria, a working consensus of species circumscription may have been reached and one of the most prominent criteria is high average nucleotide identity (ANI). ANI in effect groups strains that may recombine more or less frequently, depending on their biology, as opposed to rare interspecies gene transfer. For bacteriophages, which show various lifestyles, the nature of the fundamental natural unit, if it exists in a biological sense, is not well understood and defined. The approaches based on dot-plots are useful to group similar bacteriophages, yet are not quantitative and use arbitrarily set cut-offs. Here, we focus on lytic Myoviridae and test the ANI metric for group delineation. We show that ANI-based groups are in agreement with the International Committee on Taxonomy of Viruses (ICTV) classification and already established dot-plot groups, which are occasionally further refined owing to higher resolution of ANI analysis. Furthermore, these groups are separated among themselves by clear ANI discontinuities. Their members readily exchange core genes with each other while they do not with bacteriophages of other ANI groups, not even with the most similar. Thus, ANI-delineated groups may represent the natural units in lytic Myoviridae evolution with features that resemble those encountered in bacterial species.

APE: Analyses of Phylogenetics and Evolution in R language.

E Paradis,  J. Claude,  K Strimmer (2004)
Analysis of Phylogenetics and Evolution (APE) is a package written in the R language for use in molecular evolution and phylogenetics. APE provides both utility functions for reading and writing data and manipulating phylogenetic trees, as well as several advanced methods for phylogenetic and evolutionary analysis (e.g. comparative and population genetic methods). APE takes advantage of the many R functions for statistics and graphics, and also provides a flexible framework for developing and implementing further statistical methods for the analysis of evolutionary processes. The program is free and available from the official R package archive at http://cran.r-project.org/src/contrib/PACKAGES.html#ape. APE is licensed under the GNU General Public License.

Torsten Seemann (2014)
The multiplex capability and high yield of current day DNA-sequencing instruments has made bacterial whole genome sequencing a routine affair. The subsequent de novo assembly of reads into contigs has been well addressed. The final step of annotating all relevant genomic features on those contigs can be achieved slowly using existing web- and email-based systems, but these are not applicable for sensitive data or integrating into computational pipelines. Here we introduce Prokka, a command line software tool to fully annotate a draft bacterial genome in about 10 min on a typical desktop computer. It produces standards-compliant output files for further analysis or viewing in genome browsers. Prokka is implemented in Perl and is freely available under an open source GPLv2 license from http://vicbioinformatics.com/. © The Author 2014. Published by Oxford University Press. All rights reserved. For Permissions, please e-mail: journals.permissions@oup.com.

Daniel Huson,  David Bryant (2006)
The evolutionary history of a set of taxa is usually represented by a phylogenetic tree, and this model has greatly facilitated the discussion and testing of hypotheses. However, it is well known that more complex evolutionary scenarios are poorly described by such models. Further, even when evolution proceeds in a tree-like manner, analysis of the data may not be best served by using methods that enforce a tree structure but rather by a richer visualization of the data to evaluate its properties, at least as an essential first step. Thus, phylogenetic networks should be employed when reticulate events such as hybridization, horizontal gene transfer, recombination, or gene duplication and loss are believed to be involved, and, even in the absence of such events, phylogenetic networks have a useful role to play. This article reviews the terminology used for phylogenetic networks and covers both split networks and reticulate networks, how they are defined, and how they can be interpreted. Additionally, the article outlines the beginnings of a comprehensive statistical framework for applying split network methods. We show how split networks can represent confidence sets of trees and introduce a conservative statistical test for whether the conflicting signal in a network is treelike. Finally, this article describes a new program, SplitsTree4, an interactive and comprehensive tool for inferring different types of phylogenetic networks from sequences, distances, and trees.