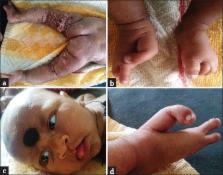 ScienceOpenPublisherPMC
Bookmark
There is no author summary for this article yet. Authors can add summaries to their articles on ScienceOpen to make them more accessible to a non-specialist audience.
Sir, Focal dermal hypoplasia (FDH) or Goltz syndrome was first described by Liebermann in 1935 as “atrophodermia linearis maculosa et papillomatosis congenitalis.” Goltz in 1962 mentioned the term “FDH.” It is a rare syndrome identified by dysplasia of structures derived from ectoderm and mesoderm. Hence, named as congenital ectodermal-mesodermal dysplasia also.[1] Incidence is 1:50,000–1:150,000 in the general population. It primarily affects the cutaneous and skeletal system, but ocular, dental, and central nervous system anomalies are fairly common. Being an X-linked dominant condition only females are affected, whereas male dies in utero. Skeletal abnormalities are found in around 80% cases.[2] We report a case of FDH in an 11 weeks, low birth weight female infant born out of nonconsanguineous marriage from an unaffected parent. At the time of presentation to us she had multiple inflamed and eroded patches over posterior thigh, back, and buttock [Figure 1]. After 6 weeks, she developed multiple round hypopigmented atrophied patches of varying sizes developed bilaterally over the back of thigh, buttock, lateral abdomen, and umbilicus in a blaschkoid pattern. Lesions were cribriform and surrounded by a hyperpigmented border [Figure 2a]. On skeletal examination, there were some typical changes. Hand feet showed syndactyly of right 3rd and 4th finger, polydactyly of left foot, and lobster deformity of the right foot [Figure 2b and d]. Nails of hand were dystrophic. Face showed round shape, pointed chin, incomplete left-sided cleft lip, narrow depressed nasal bridge, widened flared nasal ala with less scalp, and eyebrow hair [Figure 2c]. On ophthalmology referral, they found bilateral keratoconus. X-ray from long bones showed osteopathia striata. Biopsy from the atrophic, hypopigmented lesion of the back of thigh showed normal epidermis and thin dermis with scanty collagen. Multiple discrete areas of mature adipocytes impinging epidermis noted. This rare skin disease is due to a mutation in PORCN gene that is located in X chromosome. PORCN is a part of porcupine gene family detected first in drosophila. It is responsible for the synthesis of endoplasmic reticulum protein with multiple transmembrane domains. It is also a regulator of Wnt signaling.[3] Eye features include microphthalmia with bilateral coloboma of the iris, ectopia lentis, strabismus, anophthalmia, nystagmus, irregularities of the pupils, and corneal defects such as keratoconus, photophobia, and ptosis.[4] Eye lesions itself are not so common with this syndrome and keratoconus was reported in very few cases. Musculoskeletal defects are osteopenia, spina bifida, scoliosis, etc. Hypermobile joint with hand foot asymmetry is evident many times. Syndactyly, ectrodactyly polydactyly, hypoplasia, or agenesis of fingers with a lobster deformity in extreme cases is seen among hand foot defect.[5] The lobster defect of the foot was seen in our cases also. Figure 1 Inflamed eroded areas at presentation Figure 2 (a) Cribriform atrophy over posterior thigh (b) lobster foot (c) left-sided partial cleft lip (d) lobster foot(closer view) Treatment of Goltz syndrome is mainly supportive. Genetic counseling, local skin care, correction of systemic associations and deformities are the mainstay of therapy. Proper rehabilitative measures are of utmost importance for a grown up child.[4] Declaration of patient consent The authors certify that they have obtained all appropriate patient consent forms. In the form the patient(s) has/have given his/her/their consent for his/her/their images and other clinical information to be reported in the journal. The patients understand that their names and initials will not be published and due efforts will be made to conceal their identity, but anonymity cannot be guaranteed. Financial support and sponsorship Nil. Conflicts of interest There are no conflicts of interest.

Deficiency of PORCN, a regulator of Wnt signaling, is associated with focal dermal hypoplasia.

Addis Tenkir,  Samuel Teshome (2010)
Background Goltz syndrome or focal dermal hypoplasia (FDH) is an uncommon multisystem disorder. Herein, we report a typical case of FDH with unilateral ocular, cutaneous and skeletal features. Case Presentation a 4-year-old girl presented with microphthalmos and iris coloboma of the left eye, facial asymmetry, and a low-set protruding ear. Cutaneous changes included hypopigmented atrophic macules on the left side of the face, chest, abdomen and limbs. Characteristic lobster claw deformity of left hand and oligodactyly and syndactyly of left foot were present. Conclusions FDH usually affects both sides of the body. This case represents the unusual unilateral manifestation of the syndrome.