Effectiveness of exercise on fatigue in hemodialysis patients: a randomized controlled trial 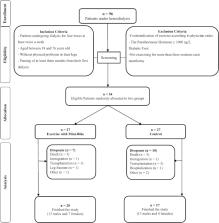 Hemodialysis is one of the common therapies in patients with end-stage renal disease. Even patients who receive regular treatment suffer from fatigue, which is one of the main factors leading to poor quality of life. This study aimed to determine the effectiveness of exercising on mini-bikes on fatigue in hemodialysis patients.

This study is a randomized controlled clinical trial. Thirty-seven hemodialysis patients participated in the study. The patients were randomly allocated to either the intervention group ( n = 20) or the control group ( n = 17). The participants in the intervention group exercised on mini-bikes for 20 min twice a week for 3 months. The patients’ fatigue was measured four times during and after the intervention. Multidimensional Fatigue Inventory was used to measure the fatigue level. The total score in the MFI is 4 to 20 for each domain, with the resulting total fatigue score ranging from 20 to 100; thus, the higher the score, the higher the level of fatigue. Data were analyzed by SPSS 18. The repeated measures ANOVA was used to compare the fatigue scores within each group and between the groups at different times.

The results showed that rehabilitation through exercising using mini-bikes had a significant impact on preventing further fatigue build-up in hemodialysis patients, making the mini-bike an effective non-pharmaceutical intervention preventing the increase in fatigue experienced by patients undergoing hemodialysis.

M Yurtkuran,  A Alp,  K Dilek (2007)
To evaluate the effects of a yoga-based exercise program on pain, fatigue, sleep disturbance, and biochemical markers in hemodialysis patients. In 2004 a randomized controlled trial was carried out in the outpatient hemodialysis unit of the Nephrology Department, Uludag University Faculty of Medicine. Clinically stable hemodialysis patients (n=37) were included and followed in two groups: the modified yoga-based exercise group (n=19) and the control group (n=18). Yoga-based exercises were done in groups for 30 min/day twice a week for 3 months. All of the patients in the yoga and control groups were given an active range of motion exercises to do for 10 min at home. The main outcome measures were pain intensity (measured by the visual analogue scale, VAS), fatigue (VAS), sleep disturbance (VAS), and grip strength (mmHg); biochemical variables-- urea, creatinine, calcium, alkaline phosphatase, phosphorus, cholesterol, HDL-cholesterol, triglyceride, erythrocyte, hematocrit--were evaluated. After a 12-week intervention, significant improvements were seen in the variables: pain -37%, fatigue -55%, sleep disturbance -25%, grip strength +15%, urea -29%, creatinine -14%, alkaline phosphatase -15%, cholesterol -15%, erythrocyte +11%, and hematocrit count +13%; no side-effects were seen. Improvement of the variables in the yoga-based exercise program was found to be superior to that in the control group for all the variables except calcium, phosphorus, HDL-cholesterol and triglyceride levels. A simplified yoga-based rehabilitation program is a complementary, safe and effective clinical treatment modality in patients with end-stage renal disease.

C Lundh Hagelin,  Carl-Johan Fürst,  Sara Runesdotter … (2006)
The Multidimensional Fatigue Inventory (MFI-20) scale is widely used for measuring fatigue in cancer care. This questionnaire has been translated into Swedish and used in Swedish cancer populations, and the aim of this study was to test the validity and reliability of the Swedish version in four populations, with a total of 584 patients. The participants were classified into four groups: palliative cancer patients, cancer patients receiving radiation therapy, non-cancer outpatients, and a group of hospital staff. The MFI-20 consists of five subscales of fatigue: General Fatigue (GF), Physical Fatigue (PF), Reduced Motivation (RM), Reduced Activity (RA) and Mental Fatigue (MF). We have tested the convergent validity of the MFI-20 using the Category Ratio instrument (CR-10). The validity and the reliability of MFI-20 were acceptable. All subscales of the MFI-20 were correlated, and all were also correlated with the CR-10 score (p < or = 0.001). General Fatigue was highly correlated with Physical Fatigue for the three patient groups, but this was not the fact for healthy staff. Deleting some items increased Cronbach's alpha of the subscale to which these items belonged (where alpha measures the reliability of the results). The level of non-response was low (less than 1.2%) and there was no pattern to the items omitted. We conclude that the MFI-20 is a valid and reliable instrument for measuring fatigue in patients and in healthy individuals. The results support, to some extent, earlier findings and one item can be removed from the Swedish version of the MFI-20.

Open Access This article is licensed under a Creative Commons Attribution 4.0 International License, which permits use, sharing, adaptation, distribution and reproduction in any medium or format, as long as you give appropriate credit to the original author(s) and the source, provide a link to the Creative Commons licence, and indicate if changes were made. The images or other third party material in this article are included in the article's Creative Commons licence, unless indicated otherwise in a credit line to the material. If material is not included in the article's Creative Commons licence and your intended use is not permitted by statutory regulation or exceeds the permitted use, you will need to obtain permission directly from the copyright holder. To view a copy of this licence, visit http://creativecommons.org/licenses/by/4.0/. The Creative Commons Public Domain Dedication waiver ( http://creativecommons.org/publicdomain/zero/1.0/) applies to the data made available in this article, unless otherwise stated in a credit line to the data.