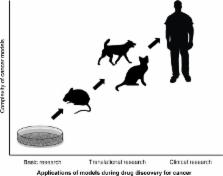 Cancer is the term used to describe over 100 diseases that share several common hallmarks. Despite prevention, early detection, and novel therapies, cancer is still the second leading cause of death in the USA. Successful bench-to-bedside translation of basic scientific findings about cancer into therapeutic interventions for patients depends on the selection of appropriate animal experimental models. Cancer research uses animal and human cancer cell lines in vitro to study biochemical pathways in these cancer cells. In this review, we summarize the important animal models of cancer with focus on their advantages and limitations. Mouse cancer models are well known, and are frequently used for cancer research. Rodent models have revolutionized our ability to study gene and protein functions in vivo and to better understand their molecular pathways and mechanisms. Xenograft and chemically or genetically induced mouse cancers are the most commonly used rodent cancer models. Companion animals with spontaneous neoplasms are still an underexploited tool for making rapid advances in human and veterinary cancer therapies by testing new drugs and delivery systems that have shown promise in vitro and in vivo in mouse models. Companion animals have a relatively high incidence of cancers, with biological behavior, response to therapy, and response to cytotoxic agents similar to those in humans. Shorter overall lifespan and more rapid disease progression are factors contributing to the advantages of a companion animal model. In addition, the current focus is on discovering molecular targets for new therapeutic drugs to improve survival and quality of life in cancer patients.

Inhibition of prostaglandin synthesis as a mechanism of action for aspirin-like drugs.

D Chen,  M Frezza,  S. Schmitt … (2011)
Targeting the ubiquitin-proteasome pathway has emerged as a rational approach in the treatment of human cancer. Based on positive preclinical and clinical studies, bortezomib was subsequently approved for the clinical use as a front-line treatment for newly diagnosed multiple myeloma patients and for the treatment of relapsed/refractory multiple myeloma and mantle cell lymphoma, for which this drug has become the staple of treatment. The approval of bortezomib by the US Food and Drug Administration (FDA) represented a significant milestone as the first proteasome inhibitor to be implemented in the treatment of malignant disease. Bortezomib has shown a positive clinical benefit either alone or as a part of combination therapy to induce chemo-/radio-sensitization or overcome drug resistance. One of the major mechanisms of bortezomib associated with its anticancer activity is through upregulation of NOXA, which is a proapoptotic protein, and NOXA may interact with the anti-apoptotic proteins of Bcl-2 subfamily Bcl-X(L) and Bcl-2, and result in apoptotic cell death in malignant cells. Another important mechanism of bortezomib is through suppression of the NF-κB signaling pathway resulting in the down-regulation of its anti-apoptotic target genes. Although the majority of success achieved with bortezomib has been in hematological malignancies, its effect toward solid tumors has been less than encouraging. Additionally, the widespread clinical use of bortezomib continues to be hampered by the appearance of dose-limiting toxicities, drug-resistance and interference by some natural compounds. These findings could help guide physicians in refining the clinical use of bortezomib, and encourage basic scientists to generate next generation proteasome inhibitors that broaden the spectrum of efficacy and produce a more durable clinical response in cancer patients. Other desirable applications for the use of proteasome inhibitors include the development of inhibitors against specific E3 ligases, which act at an early step in the ubiquitin-proteasome pathway, and the discovery of less toxic and novel proteasome inhibitors from natural products and traditional medicines, which may provide more viable drug candidates for cancer chemoprevention and the treatment of cancer patients in the future.

M Denissenko,  A Pao,  Clara Tang … (1996)
Cigarette smoke carcinogens such as benzo[a]pyrene are implicated in the development of lung cancer. The distribution of benzo[a]pyrene diol epoxide (BPDE) adducts along exons of the P53 gene in BPDE-treated HeLa cells and bronchial epithelial cells was mapped at nucleotide resolution. Strong and selective adduct formation occurred at guanine positions in codons 157, 248, and 273. These same positions are the major mutational hotspots in human lung cancers. Thus, targeted adduct formation rather than phenotypic selection appears to shape the P53 mutational spectrum in lung cancer. These results provide a direct etiological link between a defined chemical carcinogen and human cancer.