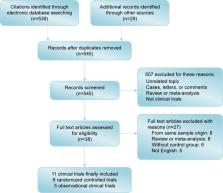 The efficacy and safety of ticagrelor following percutaneous coronary intervention for patients with acute coronary syndrome remains unclear. This study sought to evaluate clinical outcomes of ticagrelor as part of dual-antiplatelet treatment for these patients.

PubMed, MEDLINE, Embase, and other Internet sources were searched for eligible citations. The primary end point was major adverse cardiovascular and cerebrovascular events, consisting of cardiovascular death, myocardial infarction, and stroke. The secondary end point was the occurrence of definite/probable stent thrombosis (ST). The risk of bleeding was chosen to be the safety end point.

Eleven clinical trials – six randomized trials and five observational trials – were finally analyzed. A tendency toward reduction in the risk of major adverse cardiovascular and cerebrovascular events was observed only with respect to ticagrelor (OR 0.83, 95% CI 0.66–1.03; P=0.091), which might have resulted from the lower risk of cardiovascular death (OR 0.78, 95% CI 0.68–0.89; P<0.001). The overall incidence of ST differed significantly between the ticagrelor group and the clopidogrel group (OR 0.74, 95% CI 0.59–0.93; P=0.009), but the risk of bleeding, regardless of major or minor bleeding, increased significantly.

2013 ACCF/AHA guideline for the management of ST-elevation myocardial infarction: a report of the American College of Cardiology Foundation/American Heart Association Task Force on Practice Guidelines.

Thirty-year trends (1975 to 2005) in the magnitude of, management of, and hospital death rates associated with cardiogenic shock in patients with acute myocardial infarction: a population-based perspective.