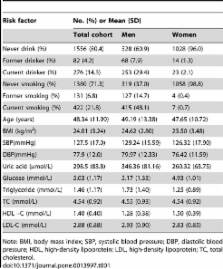 Serum amyloid A protein (SAA) is not only an inflammatory factor, but also an apolipoprotein that can replace apolipoprotein A1 (apoA1) as the major apolipoprotein of high-density lipoprotein (HDL), which has been linked to atherosclerosis. However, the relationship between genetic polymorphisms of SAA and the intima-media thickness (IMT) of the common carotid artery in healthy subjects remains unclear. We investigated the role of SAA1 and SAA2 gene polymorphisms with IMT in a cohort of healthy subjects participating in the Cardiovascular Risk Survey (CRS) study.

Both rs12218 of the SAA1 gene and rs2468844 of SAA2 gene are associated with carotid IMT in healthy Han Chinese subjects.

Blaine Hoppe,  M Jeenah,  Simon Coetzee … (1986)
Serum amyloid A protein (apo-SAA), an acute phase reactant, is an apolipoprotein of high density lipoproteins (HDL), in particular the denser subpopulation HDL3. The structure of HDL3 isolated from humans affected by a variety of severe disease states was investigated with respect to density, size, and apolipoprotein composition, using density gradient ultracentrifugation, gradient gel electrophoresis, gel filtration, and solid phase immunoadsorption. Apo-SAA was present in HDL particles in increasing amounts as particle density increased. Apo-SAA-containing HDL3 had bigger radii than normal HDL3 of comparable density. Purified apo-SAA associated readily with normal HDL3 in vitro, giving rise to particles containing up to 80% of their apoproteins as apo-SAA. The addition of apo-SAA resulted in a displacement of apo-A-I and an increase in particle size. Acute phase HDL3 represented a mixture of particles, polydisperse with respect to apolipoprotein content; for example, some particles were isolated that contained apo-A-I, apo-A-II, and apo-SAA, whereas others contained apo-A-I and apo-SAA but no apo-A-II. We conclude that apo-SAA probably associates in the circulation of acute phase patients with existing HDL particles, causing the remodeling of the HDL shell to yield particles of bigger size and higher density that are relatively depleted of apo-A-I.

Role of serum amyloid A during metabolism of acute-phase HDL by macrophages.

E. Malle,  G Marsche,  S Lestavel-Delattre … (2000)
The serum amyloid A (SAA) family of proteins is encoded by multiple genes that display allelic variation and a high degree of homology in mammals. Triggered by inflammation after stimulation of hepatocytes by lymphokine-mediated processes, the concentrations of SAA may increase during the acute-phase reaction to levels 1000-fold greater than those found in the noninflammatory state. In addition to its role as an acute-phase reactant, SAA (104 amino acids, 12 kDa) is considered to be the precursor protein of secondary reactive amyloidosis, in which the N-terminal portion is incorporated into the bulk of amyloid fibrils. However, the association with lipoproteins of the high-density range and subsequent modulation of the metabolic properties of its physiological carrier appear to be the principal role of SAA. Because SAA may displace apolipoprotein A-I, the major protein component of native high density lipoprotein (HDL), during the acute-phase reaction, the present study was aimed at (1) investigating binding properties of native and acute-phase (SAA-enriched) HDL by J774 macrophages, (2) elucidating whether the presence of SAA on HDL particles affects selective uptake of HDL-associated cholesteryl esters, and (3) comparing cellular cholesterol efflux mediated by native and acute-phase HDL. Both the total and the specific binding at 4 degrees C of rabbit acute-phase HDL were approximately 2-fold higher than for native HDL. Nonlinear regression analysis revealed K(d) values of 7.0 x 10(-7) mol/L (native HDL) and 3.1 x 10(-7) mol/L (acute-phase HDL), respectively. The corresponding B(max) values were 203 ng of total lipoprotein per milligram of cell protein (native HDL) and 250 ng of total lipoprotein per milligram of cell protein (acute-phase HDL). At 37 degrees C, holoparticle turnover was slightly enhanced for acute-phase HDL, a fact reflected by 2-fold higher degradation rates. In contrast, the presence of SAA on HDL specifically increased (1. 7-fold) the selective uptake of HDL cholesteryl esters from acute-phase HDL by J774 macrophages, a widely used in vitro model to study foam cell formation and cholesterol efflux properties. Although ligand blotting experiments with solubilized J774 membrane proteins failed to identify the scavenger receptor-BI as a binding protein for both native and acute-phase HDL, 2 binding proteins with molecular masses of 100 and 72 kDa, the latter comigrating with CD55 (also termed decay-accelerating factor), were identified. During cholesterol efflux studies, it became apparent that the ability of acute-phase HDL with regard to cellular cholesterol removal was considerably lower than that for native HDL. This was reflected by a 1.7-fold increase in tau/2 values (22 versus 36 hours; native versus acute-phase HDL). Our observations of increased HDL cholesteryl ester uptake and reduced cellular cholesterol efflux (acute-phase versus native HDL) suggest that displacement of apolipoprotein A-I by SAA results in considerable altered metabolic properties of its main physiological carrier. These changes in the apolipoprotein moieties appear (at least in the in vitro system tested) to transform an originally antiatherogenic into a proatherogenic lipoprotein particle.

E. Malle,  F Bem (1996)
Serum amyloid A (SAA) proteins comprise a family of apolipoproteins synthesized in response to cytokines released by activated monocytes/macrophages. Acute-phase protein concentrations have been advocated as objective biochemical indices of disease activity in a number of different inflammatory processes. Clinical studies in large groups of patients with a variety of disorders confirmed the rapid production and exceptionally wide dynamic range of the SAA response. It is as sensitive a marker for the acute-phase as C-reactive protein (CRP). Recent studies indicate that SAA is the most sensitive non-invasive biochemical marker for allograft rejection. Further studies comparing the measurement of SAA to CRP could reveal other indications for its specific use. These studies are now more feasible given newer assays to measure this acute-phase reactant. Observations that the acutephase response is tightly coupled to lipoprotein abnormalities and the fact that acute-SAA proteins are mainly associated with plasma lipoproteins of the high density range suggested a possible role of this apolipoprotein (apo SAA) in the development of atherosclerosis. The expression of SAA mRNA in human atherosclerotic lesions and the induction of acute-phase SAA by oxidized low-density lipoproteins strengthen the hypothesis that SAA might play a role in vascular injury and atherogenesis.

Publisher ID: 10-PONE-RA-21034R2
DOI: 10.1371/journal.pone.0013997
PMC ID: 2982816
PubMed ID: 21103356
Copyright statement: Xie et al. This is an open-access article distributed under the terms of the Creative Commons Attribution License, which permits unrestricted use, distribution, and reproduction in any medium, provided the original author and source are credited.