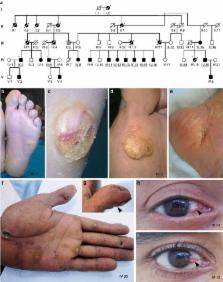 Journal: The Journal of Investigative Dermatology

ScienceOpenPublisherPMC
Bookmark
There is no author summary for this article yet. Authors can add summaries to their articles on ScienceOpen to make them more accessible to a non-specialist audience.
TO THE EDITOR Familial keratoacanthomas (KAs) are characterized by the appearance of multiple epithelial tumors that are believed to arise from adjoining hair follicles (Schwartz, 1994). These lesions, which phenotypically and histologically resemble squamous cell carcinomas (SCCs) (Cribier et al., 1999), have a fast evolution and spontaneous regression. To date, four familial forms of multiple KAs have been described: (1) multiple self-healing squamous epithelioma (MSSE; Smith, 1948); (2) the Grzybowski syndrome (Grzybowski, 1950); (3) the Witten–Zak syndrome (Witten and Zak, 1952); and 4) the Muir-Torre syndrome (Muir et al., 1967). The Muir-Torre syndrome (MIM#158320) is caused by mutations in the DNA-repair genes MSH2/MLH1 (Bapat et al., 1996; Kruse et al., 1998), and MSSE (MIM#132800) is due to mutations in TGFBR1 (Goudie et al., 2011), but the causative genes underlying the other two familial KAs are still not known. We describe here, in a five-generation Tunisian family comprising 27 affected individuals with autosomal dominant transmission of palmoplantar KAs, an unreported syndrome that we have named multiple self-healing palmoplantar carcinoma (MSPC) (Figure 1). MSPC has the distinctive feature of mainly affecting epithelial tissues that are devoid of hair follicles, such as palmoplantar skin and the conjunctival epithelium. Phenotypically, the development of skin lesions begins with a progressive appearance of multiple ulcerative-nodular tumors on plantar skin (Figure 1b–e). The average age of onset was 8.8 years for the 15 propositi studied and ranged from 1 to 25 years (Supplementary Figure S1a online). Palmoplantar tumors (5–50 mm in diameter, 8–12 in number) grew over a period of 3 months and spontaneously regressed after 6 months, leaving atrophic scars consistent with KAs (Figure 1e). Histological examination of a primary plantar lesion and peri-lesional skin of patient IV:2 showed a massive epidermal hyperkeratosis overlying an endophytic squamoproliferative tumor with prominent keratin cyst formation and crypt abscesses and a dense stromal inflammatory infiltrate at the base (Supplementary Figure S1b–f online). Notably, the granular layer, which is prominent in normal palmoplantar epidermis, was nearly absent. Histological findings are suggestive of a verrucous carcinoma, a low-grade SCC. In addition to palmoplantar tumors, 80% of studied propositi also developed conjunctival lesions, which appeared in the second decade of life (Figure 1h and i). All were surgically removed, and histological examination of one such tumor revealed squamous epithelial lobules with a dyskeratotic center, suggestive of a conjunctival KA (data not shown). The use of retinoids (Etretinate or Acitretin) halted the progression of the palmoplantar tumors but also stopped their self-regression to a final pitted-scar stage. In cases of resistance to retinoid treatment, palmoplantar tumors were operated upon. Despite these precautions, 5 out of 15 (33%) affected patients whose medical records were available had developed malignant tumors in the lungs (III:10) and head and neck (III:11 and IV:19), SCC on the nose (IV:5), and SCC with bone metastasis (IV:2) (Supplementary Figure S1a online). Patient IV:2 developed both labial (Figure 2a) and heel SCC, which infiltrated the calcaneus bone (Figure 2b–e), requiring bilateral leg amputation. On the basis of its autosomal dominant transmission and multiple self-regressive presentations, we initially hypothesized that this syndrome could be a clinically heterogeneous form of MSSE. However, neither Sanger sequencing of all nine exons of TGFBR1 nor haplotype mapping of its locus on chromosome 9q22.33 revealed any common allele shared by all propositi. No DNA-repair defects were observed consistent with the patient's normal karyotypes and absence of chromatin fragility in patients' B-lymphocytes, arguing against a phenotype related to the Muir-Torre syndrome. To unambiguously map the causative allele for this uncommon genodermatosis, we obtained DNA from blood samples from 11 affected and 5 unaffected members after obtaining informed written consent and Institutional Review Board approval. Members were single-nucleotide polymorphism genotyped using human 660W-Quad BeadChips from Illumina (Figure 1a), and identity-by-descent mapping was performed (Reversade et al., 2009). Assuming autosomal dominant transmission, only one identity-by-descent block on chromosome 17p13.3-p12 was found to be shared by all genotyped probands and not by any of the five unaffected family members tested (Figure 2f). Meeting genome-wide significance, parametric and non-parametric linkage analyses yielded a maximum LOD score of 1.69 (Abecasis et al., 2002) and 4.21 (manual calculation), respectively. This 11.4 Mb locus bracketed by single-nucleotide polymorphisms rs8065368 and rs2322788 contains 288 genes (GRCh37/hg19: chr17:1541109-12964181) (Figure 2f) including TP53, a prominent tumor suppressor often mutated in skin cancer (Giglia-Mari and Sarasin, 2003). Sanger sequencing excluded mutations in TP53, arguing that a hitherto unidentified causative gene for MSPC lies within this haplotype. The combination of clinical presentations primarily affecting palmoplantar and conjunctival skin and autosomal dominant genetic transmission argues that this syndrome is an inherited skin disease that to our knowledge is previously unreported. Six characteristics distinguish MSPC from the other four familial KA syndromes: (1) the earlier age of onset varying between 1 and 25 years; (2) the primary lesions that do not arise in sun-exposed areas but rather at points of pressure and friction; (3) the presence of conjunctival KA; (4) the ulcerative-nodular aspects of tumors; (5) the larger size of tumors, which vary between 5 and 50 mm; and (6) the tendency to transform into SCC with metastases, a feature only seen in MSSE patients subjected to radiotherapy (Chakrabarty and Perks, 1996). These differences, together with the presence of exclusive linkage to chromosome chr.17p13.3-p12, argue that MSPC is clinically and genetically distinct from MSSE, other inherited multiple KA, or punctate palmoplantar-specific genodermatosis (Pohler et al., 2012). To the best of our knowledge, only one similar case with multiple self-healing palmoplantar lesions has been reported in the literature (Feldman and Maize, 2007). Unlike KAs, which are believed to originate from hair follicles, the presence of lesions on hairless palmoplantar skin and on conjunctival epithelia argues instead that MSPC can originate from interfollicular keratinocyte progenitors. We propose that this different syndrome should be classified as an inherited predisposition to skin cancer with primary palmoplantar and conjunctival tumors. We anticipate that the causative gene for MSPC will be rapidly identified as awareness is raised about its existence and correct clinical diagnosis.

Alain Sarasin,  Giuseppina Giglia-Mari (2003)
The p53 gene (TP53) is mutated in numerous human cancers. We have used it as a molecular target to characterize the induction of mutations in human skin cancers. About 50% of all skin cancers in normal individuals exhibit p53 mutations. This frequency rises to 90% in skin cancers of patients with the DNA-repair deficiency known as xeroderma pigmentosum (XP). These mutations are characterized by a specific signature, attributed to the ultraviolet uvB part of the solar spectrum. In this review, we will describe different p53 mutation spectra, in relation to the various histopathological types of skin cancers such as basal cell carcinoma (BCC), squamous cell carcinoma (SCC), and malignant melanoma as well as to the DNA repair efficiency of the patients. In particular, different mutational hot spots are found among the various spectra. We have tried to elucidate them in terms of induced DNA lesion hot spots, as well as speed of local nucleotide excision repair (NER) or sequence effects. The molecular analysis of these mutagenic characteristics should help in the understanding of the origin of human skin cancers in the general population. Copyright 2003 Wiley-Liss, Inc.

Multiple primary carcinomata of the colon, duodenum, and larynx associated with kerato-acanthomata of the face.

Allison R. Schwartz (1993)
The keratoacanthoma is a common cutaneous neoplasm that most often occurs on sun-exposed sites in light-skinned persons of middle age or older. It is considered the prototype of cutaneous pseudo-malignancies because it is a rapidly growing tumor with a histologic pattern resembling squamous cell carcinoma. It may be best viewed as an aborted malignancy that only rarely progresses into an invasive squamous cell carcinoma. It is most likely derived from hair follicle cells. The common type of keratoacanthoma and its many variants are discussed with emphasis on clinical and histologic features, biologic behavior, and response to therapy.