Cancer Mortality Projections in Korea up to 2032 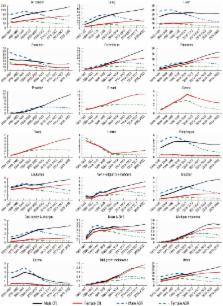 Predicting cancer mortality is important to estimate the needs of cancer-related services and to prevent cancer. Despite its significance, a long-term future projection of cancer mortality has not been conducted; therefore, our objective was to estimate future cancer mortality in Korea by cancer site through 2032. The specially designed Nordpred software was used to estimate cancer mortality. The cancer death data from 1983 to 2012 and the population projection data from 1983 to 2032 were obtained from the Korean National Statistics Office. Based on our analysis, age-standardized rates with the world standard population of all cancer deaths were estimated to decline from 2008-2012 to 2028-2032 (men: -39.8%, women: -33.1%). However, the crude rates are predicted to rise (men: 29.8%, women: 24.4%), and the overall number of the cancer deaths is also estimated to increase (men: 35.5%, women: 32.3%). Several cancer deaths are projected to increase (lung, liver and gallbladder, colon and rectum, pancreas and leukemia in both sexes; prostate cancer in men; and breast and ovarian cancer in women), whereas other cancer deaths are expected to decrease (stomach, esophagus and larynx in both sexes and cervical cancer in women). The largest contribution to increasing cancer deaths is due to the aging of the Korean population. In conclusion, a strategy for primary prevention, early detection, and early treatment to cope with the rapidly increasing death of cancer due to population aging is urgently required. 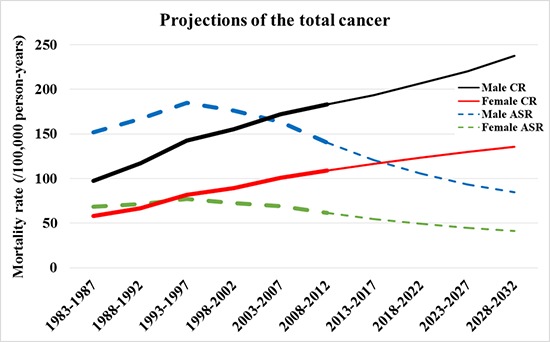 A review of human carcinogens--Part B: biological agents.

Cancer incidence in the United Kingdom: projections to the year 2030

Akshitkumar M Mistry,  D Parkin,  A Ahmad … (2011)
Background: Projections of cancer incidence are important for planning health services and to provide a baseline for assessing the impact of public health interventions. Methods: Rates estimated from smooth function age–period–cohort modelling of cancer incidence data from Great Britain 1975 to 2007 are extrapolated to 2030 and applied to UK population projections. Prostate and breast cancer projections take into account the effect of screening. Results: Overall rates of cancer are projected to be stable over the next 20 years, but this masks individual changes. In both sexes, age-standardised rates of cancers of the stomach, larynx, bladder and leukaemia are projected to fall by ⩾1% per year, whereas cancers of the lip, mouth and pharynx (ICD-10 C00-C14) and melanoma are projected to increase by ⩾1% per year. The growing and aging populations will have a substantial impact: numbers of cancers in men and women are projected to increase by 55% (from 149 169 to 231 026) and 35% (from 148 716 to 200 929), respectively, between 2007 and 2030. The model used yields similar results to those of Nordpred, but is more flexible. Conclusion: Without new initiatives for smoking and obesity reduction, the number of cancers in the United Kingdom will increase substantially reflecting the growing and aging populations.

H. Kim,  S. Choi,  Sarah K R Cho … (2007)
Helicobacter pylori-associated gastrointestinal diseases have been widely recognized. The aims of this study were to investigate the interval change of seropositivity of H. pylori between 1998 and 2005 in Korean adult population and to find the factors related to H. pylori infection. Between January and December of 2005, a total of 15,916 health check-up subjects (aged > or = 16 years) from all parts of South Korea responded to the questionnaire, and the prevalence of H. pylori was investigated by measuring anti-H pylori IgG antibodies. The seropositivity in asymptomatic subjects (aged > or = 16 years) was compared with that of 1998, which was surveyed by the Korean H. pylori Study Group. The overall seropositivity rate (aged > or = 16 years) was 56.0%, and 13.9% of seropositive subjects were found to have a history of H. pylori eradication therapy. With the exclusion of subjects who had a history of H. pylori eradication and current gastrointestinal symptoms, the seropositivity rate of H. pylori became 59.6% in 8020 subjects. Seroprevalence of H. pylori was significantly higher in subjects aged 50-59 years, males, low income group, and subjects from provinces. The seroprevalence in 2005 (59.6%) significantly decreased compared with that of 1998 (66.9%), and the decrease was significant in subjects aged < 70 years, Seoul and Gyeonggi province (which is close to Seoul). The seroprevalence of H. pylori in asymptomatic health check-up adult subjects in 2005 decreased to 59.6% from 66.9% in 1998, probably as a result of the improvement of socioeconomic status and hygiene.