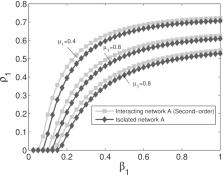 This study is concerned with the dynamic behaviors of epidemic spreading in multiplex networks. A model composed of two interacting complex networks is proposed to describe cooperative spreading processes, wherein the virus spreading in one layer can penetrate into the other to promote the spreading process. The global epidemic threshold of the model is smaller than the epidemic thresholds of the corresponding isolated networks. Thus, global epidemic onset arises in the interacting networks even though an epidemic onset does not arise in each isolated network. Simulations verify the analysis results and indicate that cooperative spreading processes in multiplex networks enhance the final infection fraction.

Alessandro Vespignani,  Romualdo Pastor-Satorras (2000)
The Internet, as well as many other networks, has a very complex connectivity recently modeled by the class of scale-free networks. This feature, which appears to be very efficient for a communications network, favors at the same time the spreading of computer viruses. We analyze real data from computer virus infections and find the average lifetime and prevalence of viral strains on the Internet. We define a dynamical model for the spreading of infections on scale-free networks, finding the absence of an epidemic threshold and its associated critical behavior. This new epidemiological framework rationalize data of computer viruses and could help in the understanding of other spreading phenomena on communication and social networks.

The spread of epidemic disease on networks

M. Newman (2002)
The study of social networks, and in particular the spread of disease on networks, has attracted considerable recent attention in the physics community. In this paper, we show that a large class of standard epidemiological models, the so-called susceptible/infective/removed (SIR) models can be solved exactly on a wide variety of networks. In addition to the standard but unrealistic case of fixed infectiveness time and fixed and uncorrelated probability of transmission between all pairs of individuals, we solve cases in which times and probabilities are non-uniform and correlated. We also consider one simple case of an epidemic in a structured population, that of a sexually transmitted disease in a population divided into men and women. We confirm the correctness of our exact solutions with numerical simulations of SIR epidemics on networks.

The Web of Human Sexual Contacts

Luís Amaral,  Fredrik Liljeros,  Yvonne Aberg … (2001)
Many ``real-world'' networks are clearly defined while most ``social'' networks are to some extent subjective. Indeed, the accuracy of empirically-determined social networks is a question of some concern because individuals may have distinct perceptions of what constitutes a social link. One unambiguous type of connection is sexual contact. Here we analyze data on the sexual behavior of a random sample of individuals, and find that the cumulative distributions of the number of sexual partners during the twelve months prior to the survey decays as a power law with similar exponents \(\alpha \approx 2.4\) for females and males. The scale-free nature of the web of human sexual contacts suggests that strategic interventions aimed at preventing the spread of sexually-transmitted diseases may be the most efficient approach.

All article content, except where otherwise noted, is licensed under a Creative Commons Attribution (CC BY) license ( http://creativecommons.org/licenses/by/4.0/ ).