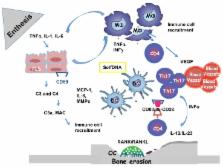 Psoriatic arthritis (PsA) is a chronic inflammatory arthropathy associated with psoriasis (PsO). PsA could be considered an enthesal disease because of the link between mechanical stress (entheses) and immunologically active tissue (synovium). Evidence of efficacy of anti-tumor necrosis factor alpha (TNF-α) is supported by reduction of histological vascularity and immune cell infiltrates in synovial tissue after treatment. Certolizumab pegol (CZP) is a polyethylene glycolylated (PEGylated) Fab’ fragment of a humanized monoclonal antibody that binds and neutralizes human TNF-α. The PEG moiety of the Fab fragment, markedly increases the half-life of CZP and confers to the drug a unique structure that differs from the other anti-TNF-α agents tested for the treatment of Crohn’s disease, rheumatoid arthritis, ankylosing spondylitis, axial spondyloarthritis, nonradiographic spondyloarthritis, PsO, and PsA. In contrast to other anti-TNF-α agents, CZP did not mediate increased levels of apoptosis, suggesting that these mechanisms are not essential for the anti-TNF-α efficacy in Crohn’s disease. As CZP, infliximab, and adalimumab, but not etanercept, almost completely inhibited lipopolysaccharide-induced interleukin-1 beta release from monocytes, this cytokine-production inhibition may be relevant for drug efficacy. Due to these characteristics, it has been demonstrated in clinical studies that CZP effectively improves signs and symptoms of arthritis and physical function and skin manifestations of PsO, with a safety profile similar to rheumatoid arthritis. This drug can be considered as a valid treatment in patients affected by PsA. The efficacy and tolerability profiles suggest CZP as a suitable antipsoriatic drug in the treatment of PsA.

M. Modi,  Rachel Harris,  Jeffrey Martin (2000)
The use of liposomal carriers and the modification of therapeutic molecules through the attachment of poly(ethylene glycol) [PEG] moieties ('pegylation') are the most common approaches for enhancing the delivery of parenteral agents. Although 'classical' liposomes (i.e. phospholipid bilayer vehicles) have been effective in decreasing the clearance of encapsulated agents and in passively targeting specific tissues, they are associated with considerable limitations. Pegylation may be an effective method of delivering therapeutic proteins and modifying their pharmacokinetic properties, in turn modifying pharmacodynamics, via a mechanism dependent on altered binding properties of the native protein. Pegylation reduces renal clearance and, for some products, results in a more sustained absorption after subcutaneous administration as well as restricted distribution. These pharmacokinetic changes may result in more constant and sustained plasma concentrations, which can lead to increases in clinical effectiveness when the desired effects are concentration-dependent. Maintaining drug concentrations at or near a target concentration for an extended period of time is often clinically advantageous, and is particularly useful in antiviral therapy, since constant antiviral pressure should prevent replication and may thereby suppress the emergence of resistant variants. Additionally, PEG modification may decrease adverse effects caused by the large variations in peak-to-trough plasma drug concentrations associated with frequent administration and by the immunogenicity of unmodified proteins. Pegylated proteins may have reduced immunogenicity because PEG-induced steric hindrance can prevent immune recognition. Two PEG-modified proteins are currently approved by the US Food and Drug Administration; several others, including cytokines such as interferon-alpha (IFNalpha), growth factors and free radical scavengers, are under development. Careful assessment of various pegylated IFNalpha products suggests that pegylated molecules can be differentiated on the basis of their pharmacokinetic properties and related changes in pharmacodynamics. Because the size, geometry and attachment site of the PEG moiety play a crucial role in determining these properties, therapeutically optimised agents must be designed on a protein-by-protein basis.

E Christophers (2001)
Despite psoriasis being a common skin disease, there are still a number of unanswered questions. One of these is the prevalence of the disease, as there is a lack of specific data, with the majority of studies reporting estimates only. Population based studies are rare and longitudinal observations on changing prevalence rates are lacking. This contrasts with other T-cell mediated autoimmune diseases where the number of those affected is rising. Epidemiological studies revealed that a distinct group of diseases is quite frequently associated with psoriasis, e.g. arthritis, colitis, diabetes and hypertension. In contrast, atopic dermatitis and allergies are less frequently seen compared to normal rates of occurrence. As the psoriatic immune response pattern relates to activated Th-1 cells, psoriasis and atopic dermatitis appear to be mutually exclusive due to the Th-1/Th-2 dichotomy.

Gianluca Fossati,  Shan Bergin,  Derek Brown … (2007)
Inhibitors of tumor necrosis factor alpha (TNFalpha) have demonstrated significant efficacy in chronic inflammatory diseases, including Crohn's disease (CD). To further elucidate the mechanisms of action of these agents, we compared the anti-TNFalpha agents certolizumab pegol, infliximab, adalimumab, and etanercept in several in vitro systems. The ability of each anti-TNFalpha agent to neutralize soluble and membrane-bound TNFalpha; mediate cytotoxicity, affect apoptosis of activated human peripheral blood lymphocytes and monocytes; induce degranulation of human peripheral blood granulocytes, and modulate lipopolysaccharide (LPS)-induced interleukin (IL)-1beta production by human monocytes was measured in vitro. All 4 agents neutralized soluble TNFalpha and bound to and neutralized membrane TNFalpha. Infliximab and adalimumab were comparable in their ability to mediate complement-dependent cytotoxicity and antibody-dependent cell-mediated cytotoxicity, and to increase the proportion of cells undergoing apoptosis and the level of granulocyte degranulation. Etanercept generally mediated these effects to a lesser degree, while certolizumab pegol gave similar results to the control reagents. LPS-induced IL-1beta production was inhibited by certolizumab pegol, infliximab, and adalimumab, but only partially inhibited by etanercept. In contrast to the other anti-TNFalpha agents tested, certolizumab pegol did not mediate increased levels of apoptosis in any of the in vitro assays used, suggesting that these mechanisms are not essential for the efficacy of anti-TNFalpha agents in CD. As certolizumab pegol, infliximab, and adalimumab, but not etanercept, almost completely inhibited LPS-induced IL-1beta release from monocytes, inhibition of cytokine production may be important for efficacy of anti-TNFalpha agents in CD.