Interferon-Beta-Induced Headache in Patients with Multiple Sclerosis: Frequency and Characterization 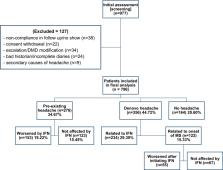 This study was a prospective, longitudinal analysis with 1-year follow-up. The study comprised 796 patients with RRMS treated with IFN-β (mean age 30.84±8.98 years) at 5 tertiary referral center outpatient clinics in Egypt between January 2015 and December 2017. Headaches were diagnosed according to the International Classification of Headache Disorders ICHD-3 (beta version), and data were collected through an interviewer-administered Arabic-language-validated questionnaire with an addendum specifically designed to investigate the temporal relationship between commencement of interferon treatment, and headache onset and characteristics.

Two hundred seventy-six patients had pre-existing headaches, and 356 experienced de novo headaches. Of 122 patients who experienced headaches before IFN-β treatment, 55 reported headaches that worsened following onset of IFN-β treatment. In patients with post-IFN-β headaches, 329 had headaches that persisted for >3 months, 51 had chronic headaches, and 278 had episodic headaches, and 216 of these patients required preventive therapies. Univariate analysis showed a >6- and an approximately 5-fold increased risk of headache among those treated with intramuscular (IM) INF-β-1a (OR 6.51; 95% CI: 3.73–10.01; P-value <0.0001) and 44 μg of SC INF-β-1a (OR 5.44; 95% CI: 3.15–9.37; P-value <0.0001), respectively, compared with that in patients who received 22 μg of SC INF-β-1a.

GC Ebers (1998)
Previous trials of interferon beta in multiple sclerosis (MS) have shown efficacy, but the degree of clinical benefit remains uncertain, and the optimum dose is not known. We undertook a double-blind, placebo-controlled study in relapsing/remitting MS to investigate the effects of subcutaneous interferon beta-1a. 560 patients with Kurtzke expanded disability status scale (EDSS) scores of 0-5.0, from 22 centres in nine countries, were randomly assigned subcutaneous recombinant interferon beta-1a 22 microg (n=189), or 44 microg (n=184), or placebo (n=187) three times a week for 2 years. Neurological examinations were done every 3 months. All patients had MRI twice yearly and 205 had monthly scans in the first 9 months of treatment. Analysis was by intention to treat. Clinical data on 533 (95%) patients were available at 2 years. The relapse rate was significantly lower at 1 and 2 years with both doses of interferon beta-1a than with placebo (mean number per patient 1.82 for 22 microg group, 1.73 for 44 microg group vs 2.56 for placebo group: risk reductions 27% [95% CI 14-39] and 33 [21-44]). Time to first relapse was prolonged by 3 and 5 months in the 22 microg and 44 microg groups respectively, and the proportion of relapse-free patients was significantly increased (p<0.05). Interferon beta-1a delayed progression in disability, and decreased accumulated disability during the study. The accumulation of burden of disease and number of active lesions on MRI was lower in both treatment groups than in the placebo group. Subcutaneous interferon beta-1a is an effective treatment for relapsing/remitting MS in terms of relapse rate, defined disability, and all MRI outcome measures in a dose-related manner, and it is well tolerated. Longer-term benefits may become clearer with further follow-up and investigation.

Multiple sclerosis: side effects of interferon beta therapy and their management.