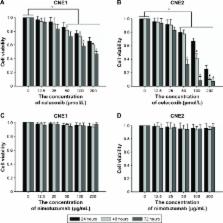 In this study, the radiation-enhancing effects of combined treatment with nimotuzumab, a humanized EGFR-blocking antibody, and celecoxib, a COX-2 selective inhibitor, in human nasopharyngeal carcinoma (NPC) cells were investigated.

3-(4,5-Dimethylthiazol-2yl)-2,5-diphenyltetrazolium bromide and clonogenic survival assays were done to evaluate the combined cytotoxic and radiosensitizing effects of nimotuzumab or celecoxib or the combination on CNE1 and CNE2 cells. Western blot analysis was performed to identify the effect of nimotuzumab and/or celecoxib with or without irradiation on the cytoplasmic and nuclear EGFR signaling pathways in CNE2 cells.

Our results demonstrated that concurrent administration of nimotuzumab and celecoxib cooperatively enhanced the cytotoxicity and radiosensitivity of CNE2 cells but not CNE1 cells. The combination of both drugs with or without irradiation also cooperatively inhibited cytoplasmic and nuclear EGFR signaling pathways in CNE2 cells.

Our results suggest a promising approach for the treatment of poorly differentiated NPC.

Use of the humanized anti-epidermal growth factor receptor monoclonal antibody h-R3 in combination with radiotherapy in the treatment of locally advanced head and neck cancer patients.

Normando Iznaga,  Eduardo Fernández,  Olga Torres … (2004)
To evaluate safety and preliminary efficacy of the humanized anti-epidermal growth factor receptor monoclonal antibody h-R3 in combination with radiotherapy (RT) in unresectable head and neck cancer patients. Secondary end points were the measurement of h-R3 serum levels and the assessment of the potential mechanisms of antitumor effect on patient biopsies. Anti-idiotypic response to h-R3 was assessed. To predict pharmacologic effect, a mathematical model for antibodies recognizing antigens expressed in tumors and normal tissues was built. Twenty-four patients with advanced carcinomas of the head and neck received six once-weekly infusions of h-R3 at four dose levels in combination with RT. Pretreatment tumor biopsies were obtained to evaluate epidermal growth factor receptor expression as an enrollment criterion. Second biopsies were taken to evaluate the proliferative activity and angiogenesis in comparison with the pretreatment samples. Patient serum samples were collected to measure h-R3 levels and anti-idiotypic response. The combination of h-R3 and RT was well tolerated. Antibody-related adverse events consisted in infusion reactions. No skin or allergic toxicity appeared. Overall survival significantly increased after the use of the higher antibody doses. Immunohistochemistry studies of tumor specimens before and after treatment revealed that antitumor response correlated with antiproliferative and antiangiogenic effect. One patient developed antibodies to h-R3. The mathematical model predicted that the maximum difference between the area under the curve in tumors and normal tissues is reached when the antibody has intermediate affinity. h-R3 is a well-tolerated drug that may enhance radiocurability of unresectable head and neck neoplasms.

Nuclear EGFR as a molecular target in cancer.

Neha Luthar,  Toni M Brand,  Mari Iida … (2013)
The epidermal growth factor receptor (EGFR) has been one of the most targeted receptors in the field of oncology. While anti-EGFR inhibitors have demonstrated clinical success in specific cancers, most patients demonstrate either intrinsic or acquired resistance within one year of treatment. Many mechanisms of resistance to EGFR inhibitors have been identified, one of these being attributed to alternatively localized EGFR from the cell membrane into the cell's nucleus. Inside the nucleus, EGFR functions as a co-transcription factor for several genes involved in cell proliferation and angiogenesis, and as a tyrosine kinase to activate and stabilize proliferating cell nuclear antigen and DNA dependent protein kinase. Nuclear localized EGFR is highly associated with disease progression, worse overall survival in numerous cancers, and enhanced resistance to radiation, chemotherapy, and the anti-EGFR therapies gefitinib and cetuximab. In this review the current knowledge of how nuclear EGFR enhances resistance to cancer therapeutics is discussed, in addition to highlighting ways to target nuclear EGFR as an anti-cancer strategy in the future. Copyright © 2013 Elsevier Ireland Ltd. All rights reserved.

Cyclooxygenase-2 is a novel transcriptional target of the nuclear EGFR-STAT3 and EGFRvIII-STAT3 signaling axes.

Wen-Sui Lo,  Hu Zhu,  Xinyu Cao … (2010)
Emerging evidence indicates a novel mode of epidermal growth factor receptor (EGFR) signaling, notably, one involves EGFR nuclear translocalization and subsequent gene activation. To date, however, the significance of the nuclear EGFR pathway in glioblastoma (GBM) is unknown. Here, we report that EGFR and its constitutively activated variant EGFRvIII undergo nuclear translocalization in GBM cells, in which the former event requires EGF stimulation and the latter is constitutive. To gain insights into the effect of nuclear EGFR on gene expression in GBM, we created isogenic GBM cell lines, namely, U87MG-vector, U87MG-EGFR, and U87MG-EGFRdNLS that, respectively, express the control vector, EGFR, and nuclear entry-defective EGFR with a deletion of the nuclear localization signal (NLS). Microarray analysis shows that 19 genes, including cyclooxygenase-2 (COX-2), to be activated in U87MG-EGFR cells but not in U87MG-EGFRdNLS and U87MG-vector cells. Subsequent validation studies indicate that COX-2 gene is expressed at higher levels in cells with EGFR and EGFRvIII than those with EGFRdNLS and EGFRvIIIdNLS. Nuclear EGFR and its transcriptional cofactor signal transducer and activator of transcription 3 (STAT3) associate with the COX-2 promoter. Increased expression of EGFR/EGFRvIII and activated STAT3 leads to the synergistic activation of the COX-2 promoter. Promoter mutational analysis identified a proximal STAT3-binding site that is required for EGFR/EGFRvIII-STAT3-mediated COX-2 gene activation. In GBM tumors, an association exists between levels of COX-2, EGFR/EGFRvIII, and activated STAT3. Together, these findings indicate the existence of the nuclear EGFR/EGFRvIII signaling pathway in GBM and its functional interaction with STAT3 to activate COX-2 gene expression, thus linking EGFR-STAT3 and EGFRvIII-STAT3 signaling axes to proinflammatory COX-2 mediated pathway.