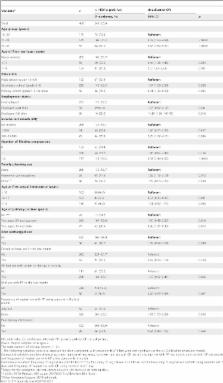 To estimate the prevalence, incidence and determinants of herpes simplex type 2 (HSV-2) infection, and associations between HSV-2 and incident HIV infection, among women at higher risk for HIV infection in Beira, Mozambique.

Between 2009 and 2012, 411 women aged 18–35 years at higher risk of HIV acquisition (defined as having had two or more sexual partners in the month prior to study enrollment) were enrolled and followed monthly for one year. At each study visit, they were counseled, interviewed, and tested for HSV-2 and HIV antibodies.

Judith R Glynn,  Olivia E. Freeman,  Keith R. Hayes … (2006)
To estimate the sex-specific effect of herpes simplex virus type 2 (HSV-2) on the acquisition of HIV infection. The increased number of longitudinal studies available since the last meta-analysis was published allows for the calculation of age- and sexual behaviour-adjusted relative risks (RR) separately for men and women. Systematic review and meta-analysis of longitudinal studies. PubMed, Embase and relevant conference abstracts were systematically searched to identify longitudinal studies in which the relative timing of HSV-2 infection and HIV infection could be established. Where necessary, authors were contacted for separate estimates in men and women, adjusted for age and a measure of sexual behaviour. Summary adjusted RR were calculated using random-effects meta-analyses where appropriate. Studies on recent HSV-2 incidence as a risk factor for HIV acquisition were also collated. Of 19 eligible studies identified, 18 adjusted for age and at least one measure of sexual behaviour after author contact. Among these, HSV-2 seropositivity was a statistically significant risk factor for HIV acquisition in general population studies of men [summary adjusted RR, 2.7; 95% confidence interval (CI), 1.9-3.9] and women (RR, 3.1; 95% CI, 1.7-5.6), and among men who have sex with men (RR, 1.7; 95% CI, 1.2-2.4). The effect in high-risk women showed significant heterogeneity, with no overall evidence of an association. Prevalent HSV-2 infection is associated with a three-fold increased risk of HIV acquisition among both men and women in the general population, suggesting that, in areas of high HSV-2 prevalence, a high proportion of HIV is attributable to HSV-2.

Anna Wald,  K. Link (2002)
To determine the contribution of herpes simplex type 2 (HSV-2) infection to the risk of human immunodeficiency virus (HIV) acquisition, a systematic review of literature and data synthesis were done. Thirty-one studies addressed the risk of HIV infection in HSV-2-seropositive persons. For 9 cohort and nested case-control studies that documented HSV-2 infection before HIV acquisition, the risk estimate was 2.1 (95% confidence interval, 1.4-3.2). Thus, the attributable risk percentage of HIV to HSV-2 was 52%, and the population attributable risk percentage was 19% in populations with 22% HSV-2 prevalence but increased to 47% in populations with 80% HSV-2 prevalence. For 22 case-control and cross-sectional studies, the risk estimate was 3.9 (95% confidence interval, 3.1-5.1), but the temporal sequence of the 2 infections cannot be documented. Control strategies for HSV-2 need to be incorporated into control of sexually transmitted infections as a strategy for HIV prevention.

The epidemiology of HSV-2 infection and its association with HIV infection in four urban African populations.

S Anagonou,  ,  Heather B. Hayes … (2001)
To estimate age- and sex-specific herpes simplex virus type-2 (HSV-2) prevalence in urban African adult populations and to identify factors associated with infection. Cross-sectional, population-based samples of about 2000 adults interviewed in each of the following cities: Cotonou, Benin; Yaoundé, Cameroon; Kisumu, Kenya and Ndola, Zambia. Consenting study participants were tested for HIV, HSV-2 and other sexually transmitted infections. HSV-2 prevalence was over 50% among women and over 25% among men in Yaoundé, Kisumu and Ndola, with notably high rates of infection among young women in Kisumu and Ndola (39% and 23%, respectively, among women aged 15-19 years). The prevalence in Cotonou was lower (30% in women and 12% in men). Multivariate analysis showed that HSV-2 prevalence was significantly associated with older age, ever being married, and number of lifetime sexual partners, in almost all cities and both sexes. There was also a strong, consistent association with HIV infection. Among women, the adjusted odds ratios for the association between HSV-2 and HIV infections ranged from 4.0 [95% confidence interval (CI) = 2.0-8.0] in Kisumu to 5.5 (95% CI = 1.7-18) in Yaoundé, and those among men ranged from 4.6 (95% CI = 2.7-7.7) in Ndola to 7.9 (95% CI = 4.1-15) in Kisumu. HSV-2 infection is highly prevalent in these populations, even at young ages, and is strongly associated with HIV at an individual level. At a population level, HSV-2 prevalence was highest in Kisumu and Ndola, the cities with the highest HIV rates, although rates were also high among women in Yaoundé, where there are high rates of partner change but relatively little HIV infection. The high prevalence of both infections among young people underlines the need for education and counselling among adolescents.