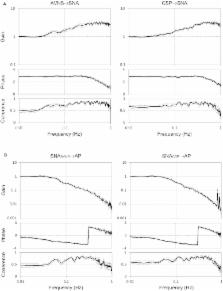 It has been established that vagal nerve stimulation (VNS) benefits patients and/or animals with heart failure. However, the impact of VNS on sympathetic nerve activity (SNA) remains unknown. In this study, we investigated how vagal afferent stimulation (AVNS) impacts baroreflex control of SNA. In 12 anesthetized Sprague–Dawley rats, we controlled the pressure in isolated bilateral carotid sinuses (CSP), and measured splanchnic SNA and arterial pressure (AP). Under a constant CSP, increasing the voltage of AVNS dose dependently decreased SNA and AP. The averaged maximal inhibition of SNA was ‐28.0 ± 10.3%. To evaluate the dynamic impacts of AVNS on SNA, we performed random AVNS using binary white noise sequences, and identified the transfer function from AVNS to SNA and that from SNA to AP. We also identified transfer functions of the native baroreflex from CSP to SNA (neural arc) and from SNA to AP (peripheral arc). The transfer function from AVNS to SNA strikingly resembled the baroreflex neural arc and the transfer functions of SNA to AP were indistinguishable whether we perturbed ANVS or CSP, indicating that they likely share common central and peripheral neural mechanisms. To examine the impact of AVNS on baroreflex, we changed CSP stepwise and measured SNA and AP responses with or without AVNS. AVNS resets the sigmoidal neural arc downward, but did not affect the linear peripheral arc. In conclusion, AVNS resets the baroreflex neural arc and induces sympathoinhibition in the same manner as the control of SNA and AP by the native baroreflex.

J Bigger,  Renato A. Mortara,  Philip Marcus … (1998)
Experimental evidence suggests that autonomic markers such as heart-rate variability and baroreflex sensitivity (BRS) may contribute to postinfarction risk stratification. There are clinical data to support this concept for heart-rate variability. The main objective of the ATRAMI study was to provide prospective data on the additional and independent prognostic value for cardiac mortality of heart-rate variability and BRS in patients after myocardial infarction in whom left-ventricular ejection fraction (LVEF) and ventricular arrhythmias were known. This multicentre international prospective study enrolled 1284 patients with a recent ( 105 ms, BRS >6.1 ms per mm Hg). The association of low SDNN or BRS with LVEF below 35% carried a relative risk of 6.7 (3.1-14.6) or 8.7 (4.3-17.6), respectively, compared with patients with LVEF above 35% and less compromised SDNN (> or = 70 ms) and BRS (> or = 3 ms per mm Hg). ATRAMI provides clinical evidence that after myocardial infarction the analysis of vagal reflexes has significant prognostic value independently of LVEF and of ventricular arrhythmias and that it significantly adds to the prognostic value of heart-rate variability.

Meihua Li,  Can Zheng,  Takayuki Sato … (2004)
Diminished cardiac vagal activity and higher heart rate predict a high mortality rate of chronic heart failure (CHF) after myocardial infarction. We investigated the effects of chronic electrical stimulation of the vagus nerve on cardiac remodeling and long-term survival in an animal model of CHF after large myocardial infarction. Two weeks after the ligation of the left coronary artery, surviving rats were randomized to vagal- and sham-stimulated groups. Using an implantable miniature radio-controlled electrical stimulator, we stimulated the right vagal nerve of CHF rats for 6 weeks. The intensity of electrical stimulation was adjusted for each rat, so that the heart rate was lowered by 20 to 30 beats per minute. The treated rats had significantly lower left ventricular end-diastolic pressure (17.1+/-5.9 versus 23.5+/-4.2 mm Hg, P<0.05) and higher maximum dp/dt of left ventricular pressure (4152+/-237 versus 2987+/-192 mm Hg/s, P<0.05) than the untreated rats. Improvement of cardiac pumping function was accompanied by a decrease in normalized biventricular weight (2.75+/-0.25 versus 3.14+/-0.22 g/kg, P<0.01). Although the 140-day survival of the untreated group was only half, vagal stimulation markedly improved the survival rate (86% versus 50%, P=0.008). Vagal stimulation therapy achieved a 73% reduction in a relative risk ratio of death. Vagal nerve stimulation markedly improved the long-term survival of CHF rats through the prevention of pumping failure and cardiac remodeling.

Vagal stimulation and prevention of sudden death in conscious dogs with a healed myocardial infarction.

Mark Foreman,  Raphaella Hull,  E Vanoli … (1991)
The interest for the antifibrillatory effect of vagal stimulation has been largely limited by the fact that this concept seemed restricted to acute experiments in anesthetized animals. To explore the potentially protective role of vagal stimulation in conscious animals we developed a chronically implantable device to be placed around the cervical right vagus. An anterior myocardial infarction was produced in 161 dogs; 1 month later an exercise stress test was performed on the 105 survivors. Toward the end of the test the circumflex coronary artery was occluded for 2 minutes. Fifty-nine (56%) dogs developed ventricular fibrillation and, before this test was repeated, were assigned either to a control group (n = 24) or to be instrumented with the vagal device (n = 35). Five dogs were excluded because of electrode malfunction. Compared with the heart rate level attained after 30 seconds of occlusion during exercise in the control test, vagal stimulation led to a decrease of approximately 75 beats/min (from 255 +/- 33 to 170 +/- 36 beats/min, p less than 0.001). In the control group 22 (92%) of 24 dogs developed ventricular fibrillation during the second exercise and ischemia test. By contrast, during vagal stimulation ventricular fibrillation occurred in only 3 (10%) of the 30 dogs tested and recurred in 26 (87%) during an additional exercise and ischemia test in the control condition (p less than 0.001 versus the vagal stimulation test; internal control analysis). Combined analysis of the tests performed in the control condition showed that ventricular fibrillation was reproducible in 48 (89%) of the 54 dogs tested. The protective effect of vagal stimulation was also significant in the group comparison analysis and even after exclusion of those four dogs in which ventricular fibrillation was not reproducible (92% versus 11.5%, control versus vagal stimulation, p less than 0.001). When heart rate was kept constant by atrial pacing, the vagally mediated protection was still significant (p = 0.015) as five (55%) of nine dogs survived the test. This study shows that vagal stimulation, performed shortly after the onset of an acute ischemic episode in conscious animals with a healed myocardial infarction, can effectively prevent ventricular fibrillation. This striking result seems to depend on multiple mechanisms having a synergistic action. The decrease in heart rate is an important but not always essential protective mechanism. The electrophysiological effects secondary to the vagally mediated antagonism of the sympathetic activity on the heart are likely to play a major role.