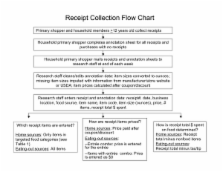 Accurate measurement of household food purchase behavior (HFPB) is important for understanding its association with household characteristics, individual dietary intake and neighborhood food retail outlets. However, little research has been done to develop measures of HFPB. The main objective of this paper is to describe the development of a measure of HFPB using annotated food purchase receipts.

Households collected and annotated food purchase receipts for a four-week period as part of the baseline assessment of a household nutrition intervention. Receipts were collected from all food sources, including grocery stores and restaurants. Households (n = 90) were recruited from the community as part of an obesity prevention intervention conducted in 2007–2008 in Minneapolis, Minnesota, USA. Household primary shoppers were trained to follow a standardized receipt collection and annotation protocol. Annotated receipts were mailed weekly to research staff. Staff coded the receipt data and entered it into a database. Total food dollars, proportion of food dollars, and ounces of food purchased were examined for different food sources and food categories. Descriptive statistics and correlations are presented.

A total of 2,483 receipts were returned by 90 households. Home sources comprised 45% of receipts and eating-out sources 55%. Eating-out entrees were proportionally the largest single food category based on counts (16.6%) and dollars ($106 per month). Two-week expenditures were highly correlated (r = 0.83) with four-week expenditures.

Supermarkets, other food stores, and obesity: the atherosclerosis risk in communities study.

Kimberly Morland, Ana V. Diez Roux, Steve Wing (2006)
Obesity is a leading public health concern, and although environmental factors have been hypothesized to play a role in the prevention of obesity, little empirical data exist to document their effects. The purpose of this study was to examine whether characteristics of the local food environment are associated with the prevalence of cardiovascular disease risk factors. A cross-sectional study of men and women participating in the third visit (1993-1995) of the Atherosclerosis Risk in Communities (ARIC) Study was conducted in 2004. The analyses included 10,763 ARIC participants residing in one of the 207 eligible census tracts located in the four ARIC-defined geographic areas. Names and addresses of food stores located in Mississippi, North Carolina, Maryland, and Minnesota were obtained from departments of agriculture. Multilevel modeling was used to calculate prevalence ratios of the associations between the presence of specific types of food stores and cardiovascular disease risk factors. The presence of supermarkets was associated with a lower prevalence of obesity and overweight (obesity prevalence ratio [PR] = 0.83, 95% confidence interval [CI] = 0.75-0.92; overweight PR = 0.94, 95% CI = 0.90-0.98), and the presence of convenience stores was associated with a higher prevalence of obesity and overweight (obesity PR = 1.16, 95% CI = 1.05-1.27; overweight PR = 1.06, 95% CI = 1.02-1.10). Associations for diabetes, high serum cholesterol, and hypertension were not consistently observed. Results from this study suggest that characteristics of local food environments may play a role in the prevention of overweight and obesity.

Joanne F Guthrie, Biing-Hwan Lin, Elizabeth Frazao (2015)
To examine changes, between 1977-78 and 1994-96, in the quantity and quality of food Americans consumed that was prepared at home versus away from home. Data were obtained from nationwide surveys of food consumption conducted by the US Department of Agriculture (USDA) in 1977-78 and 1994-96. To maximize comparability, we used "day 1" dietary data, which both surveys collected via 24-hour recall. Individuals 2 years of age and over were selected. USDA sampling weights were used to generate nationally representative estimates. We categorized foods by preparation at home or at restaurants, fast-food establishments, schools/day care, and other non-home locations. We assessed percent calories from total fat and saturated fat, and the cholesterol, sodium, fiber, calcium, and iron densities of foods prepared at home versus those prepared away from home. T tests were calculated using accepted procedures to adjust for survey design effects. Between 1977-78 and 1994-96, consumption of food prepared away from home increased from 18% to 32% of total calories. Meals and snacks based on food prepared away from home contained more calories per eating occasion, and "away" food was higher in total fat and saturated fat on a per-calorie basis than at-home food. "Away" food contained less dietary fiber, calcium, and iron on a per-calorie basis. Among adults but not children, food prepared away from home was more sodium and cholesterol dense. When developing intervention messages and strategies, nutrition educators need to be aware of the increasing role of "away" food in Americans' diets.