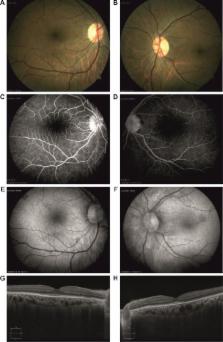 Bone marrow-derived multiple myeloma is a type of plasma cell tumor that may be associated with ocular complications. A 52-year-old male patient was admitted to our eye clinic with the complaint of sudden visual loss and a visual acuity of 20/50 in the right eye and 20/800 in the left eye. Fundus examination revealed common flame-shaped hemorrhages, venous dilatation and tortuosity, Roth spots, serous macular detachment, and yellow macular deposits in both eyes. Evaluation with fundus fluorescein angiography, fundus autofluorescence, and spectral-domain optical coherence tomography resulted in suspicion of hyperviscosity retinopathy and referral to the hematology clinic. After hematology consultation confirmed a diagnosis of multiple myeloma, chemotherapy and plasmapheresis were initiated. Four months after presentation, best-corrected visual acuity was 20/20 in both eyes and improvement in hyperviscosity retinopathy, serous macular detachment, and yellow macular deposits was observed.

Jayesh Mehta,  Seema Singhal (2003)
Hypergammaglobulinemia increases serum viscosity and is the most common cause of hyperviscosity syndrome. Monoclonal hypergammaglobulinemia resulting in hyperviscosity syndrome is seen in multiple myeloma and Waldenström's macroglobulinemia. The reasons for elevated viscosity are increased protein content and large molecular size, abnormal polymerization, and abnormal shape of immunoglobulin molecules. Other hematologic and metabolic abnormalities seen in patients with plasma cell dyscrasias also contribute to hyperviscosity. Symptomatic hyperviscosity is much more common in Waldenström's macroglobulinemia (10 to 30%) than it is in myeloma (2 to 6%). Symptoms of hyperviscosity usually appear when the normal serum viscosity of 1.4 to 1.8 cp reaches 4 to 5 cp, corresponding to a serum immunoglobulin M (IgM) level of at least 3 g/dL, an IgG level of 4 g/dL, and an IgA level of 6 g/dL. Symptoms of hyperviscosity include constitutional symptoms; bleeding; and ocular, neurological, and cardiovascular manifestations. Immediate therapy of symptomatic hyperviscosity is directed at reduction of blood viscosity by plasmapheresis to control symptoms. Long-term management is directed at control of the underlying disease to prevent production of the monoclonal protein. There may be a small proportion of individuals, usually old or with severely compromised performance status, who undergo plasma exchange as the sole symptomatic therapy of hyperviscosity secondary to plasma cell dyscrasia.

K. Bailey Freund,  Lawrence A Yannuzzi,  Maria H L Lima … (2010)
To correlate clinical observations with multimodal imaging analysis in acquired vitelliform lesions (AVLs) and to elucidate their nature, pathogenesis, and natural course. Clinical examination, color fundus photography, fluorescein angiography, near-infrared reflectance, fundus autofluorescence, and spectral-domain optical coherence tomography (SD-OCT) data were retrospectively reviewed for a consecutive series of 90 eyes of 67 patients with an AVL secondary to a variety of diagnoses. In all 90 eyes with AVLs, SD-OCT helped localize the clinically apparent yellowish material to the subretinal space above the retinal pigment epithelial (RPE) band. Only 19 eyes (21.1%) had SD-OCT evidence of subretinal fluid. All eyes exhibited abnormal hyperautofluorescence corresponding to the material seen clinically. In 18 of 72 eyes (25.0%) imaged simultaneously with SD-OCT and near-infrared reflectance imaging, near-infrared hyperreflectivity corresponding to presumed collections of pigment-laden macrophages and RPE cells was observed. Resolution of some AVLs appeared to coincide with progressive thinning of the outer nuclear layer, indicating a gradual loss of photoreceptors. Visual acuity at baseline was best predicted by the subfoveal integrity of the external limiting membrane (P = 0.001) and the inner segment/outer segment junction (P = 0.0002) on SD-OCT. Fluorescein angiography revealed a pattern often mimicking poorly defined (Type 1) choroidal neovascularization. Acquired vitelliform lesions occur in a variety of different clinical entities that share common features with multimodal imaging analyses. We propose that both dysfunctional RPE and loss of apposition between the photoreceptor tips and the RPE can interfere with the phagocytosis of shed outer segments. Both this material and pigment-laden macrophages and RPE cells appear to contribute to the yellowish appearance of AVLs. Ongoing photoreceptor loss may in some cases be associated with the spontaneous resolution of an AVL.

Multiple myeloma and its ocular manifestations.

A Knapp,  S Gartner,  P Henkind (2015)
Multiple myeloma is a malignancy of the cells of the immune system that frequently involves the eye. Cysts of the ciliary body have been reported in 33-50% of myeloma patients, and retinal vascular lesions have been reported in up to 66%. Corneal and orbital involvement is less common. In this review, systemic and immunologic aspects of multiple myeloma are outlined and ocular manifestations are illustrated.