Evaluation of selected immunological parameters and the concentration of vitamin D in children with asthma. Case-control study 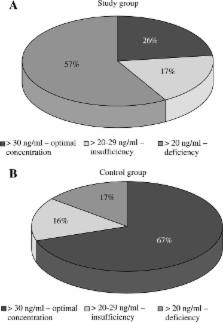 Due to the increased incidence of allergic diseases and emerging effects of unsatisfactory control of asthma, new mechanisms for supervising the immune system should be searched. The aim of the study was to analyze the percentage of CD3, CD4, CD8, CD19, CD16/56, NKT, CD3 anti-HLADR3 and Foxp3 regulatory lymphocytes in patients with asthma. Additionally the correlation between immune parameters, severity of asthma and serum concentration of vitamin D was performed. 25 children diagnosed with asthma were enrolled. Disease severity was assessed with the Asthma Control Test (ACT) and spirometry. The control group consisted of 15 healthy children. Venous blood from each patient was collected on EDTA or on “clott”. Phenotypes of lymphocytes were evaluated by flow cytometry. Vitamin D concentration was assessed by chemiluminescent immunoassay (CLIA) technology. There was a significant decrease in the percentage of T regulatory cells (p < 0.006) in children with asthma compared to the control group. There were no significant differences in the other investigated immunological parameters. In addition, in asthma group statistically significant decreased of vitamin D concentration (p < 0.04) was observed. There were also no significant correlations between vitamin D3 concentration and the course of asthma or percentage of regulatory cells. The results confirmed the role of regulatory T cells in the pathogenesis of asthma. Effects of vitamin D on the severity of the disease has not been proven.

Peter Barnes (2008)
Asthma and chronic obstructive pulmonary disease (COPD) are both obstructive airway diseases that involve chronic inflammation of the respiratory tract, but the type of inflammation is markedly different between these diseases, with different patterns of inflammatory cells and mediators being involved. As described in this Review, these inflammatory profiles are largely determined by the involvement of different immune cells, which orchestrate the recruitment and activation of inflammatory cells that drive the distinct patterns of structural changes in these diseases. However, it is now becoming clear that the distinction between these diseases becomes blurred in patients with severe asthma, in asthmatic subjects who smoke and during acute exacerbations. This has important implications for the development of new therapies.

Modulatory effects of 1,25-dihydroxyvitamin D3 on human B cell differentiation.

Sheng Chen, Gary P. Sims, Xiao Chen … (2007)
1,25-Dihydroxyvitamin D(3) (1,25(OH)(2)D(3)) can modulate immune responses, but whether it directly affects B cell function is unknown. Patients with systemic lupus erythematosus, especially those with antinuclear Abs and increased disease activity, had decreased 1,25(OH)(2)D(3) levels, suggesting that vitamin D might play a role in regulating autoantibody production. To address this, we examined the effects of 1,25(OH)(2)D(3) on B cell responses and found that it inhibited the ongoing proliferation of activated B cells and induced their apoptosis, whereas initial cell division was unimpeded. The generation of plasma cells and postswitch memory B cells was significantly inhibited by 1,25(OH)(2)D(3), although the up-regulation of genetic programs involved in B cell differentiation was only modestly affected. B cells expressed mRNAs for proteins involved in vitamin D activity, including 1 alpha-hydroxylase, 24-hydroxylase, and the vitamin D receptor, each of which was regulated by 1,25(OH)(2)D(3) and/or activation. Importantly, 1,25(OH)(2)D(3) up-regulated the expression of p27, but not of p18 and p21, which may be important in regulating the proliferation of activated B cells and their subsequent differentiation. These results indicate that 1,25(OH)(2)D(3) may play an important role in the maintenance of B cell homeostasis and that the correction of vitamin D deficiency may be useful in the treatment of B cell-mediated autoimmune disorders.

Luca Semerano, Geraldine Falgarone, Nathalie Saidenberg-Kermanac’h … (2010)
Calcitriol, or 1,25-dihydroxyvitamin D3 (1,25(OH)(2)D3) is a well-known endocrine regulator of calcium homeostasis. More recently, local calcitriol production by immune cells was shown to exert autocrine or paracrine immunomodulating effects. Immune cells that produce calcitriol also express the vitamin D receptor (VDR) and the enzymes needed to metabolize vitamin D3 (1α-, 25-, and 24-hydroxylases). Studies of animal models and cell cultures showed both direct and indirect immunomodulating effects involving the T cells, B cells, and antigen-presenting cells (dendritic cells and macrophages) and affecting both innate and adaptive immune responses. The overall effect is a switch from the Th1/Th17 response to the Th2/Treg profile. The immunomodulating effects of vitamin D may explain the reported epidemiological associations between vitamin D status and a large number of autoimmune and inflammatory diseases. Such associations have been suggested by observational studies not only in rheumatoid arthritis, lupus, inflammatory bowel disease, and type 1 diabetes; but also in infections, malignancies, transplant rejection, and cardiovascular disease. In animal models for these diseases, vitamin D supplementation has been found to produce therapeutic effects. Thus, vitamin D is a key focus for public health efforts and may hold promise for the treatment of dysimmune diseases. Copyright © 2010 Société française de rhumatologie. Published by Elsevier SAS. All rights reserved.