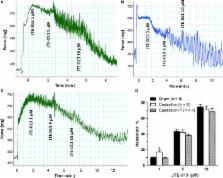 Mice deficient in sphingosine kinase 1 are rendered lymphopenic by FTY720.

Richard Proia,  Akihiro T. Sasaki,  Richard Hajdu … (2004)
Sphingosine-1-phosphate (S1P), a lipid signaling molecule that regulates many cellular functions, is synthesized from sphingosine and ATP by the action of sphingosine kinase. Two such kinases have been identified, SPHK1 and SPHK2. To begin to investigate the physiological functions of sphingosine kinase and S1P signaling, we generated mice deficient in SPHK1. Sphk1 null mice were viable, fertile, and without any obvious abnormalities. Total SPHK activity in most Sphk1-/-tissues was substantially, but not completely, reduced indicating the presence of multiple sphingosine kinases. S1P levels in most tissues from the Sphk1-/- mice were not markedly decreased. In serum, however, there was a significant decrease in the S1P level. Although S1P signaling regulates lymphocyte trafficking, lymphocyte distribution was unaffected in lymphoid organs of Sphk1-/- mice. The immunosuppressant FTY720 was phosphorylated and elicited lymphopenia in the Sphk1 null mice showing that SPHK1 is not required for the functional activation of this sphingosine analogue prodrug. The results with these Sphk1 null mice reveal that some key physiologic processes that require S1P receptor signaling, such as vascular development and proper lymphocyte distribution, can occur in the absence of SPHK1.

Markus H. Gräler,  D Hanel,  Paul Andréani (2007)
The blood constituent sphingosine 1-phosphate (S1P) is a specific ligand for five G-protein-coupled receptors designated S1P(1-5). Expression of the S1P1 receptor on lymphocytes is required for their exit from secondary lymphoid organs, suggesting that S1P serves as a stimulus for maintaining lymphocyte circulation in blood. Despite its potential role in immune surveillance, the regulatory system that controls blood S1P levels is not well understood. This report reveals that erythrocytes constitute a buffer system for S1P in blood. They efficiently incorporated and stored S1P, and protected it from cellular degradation. They also released S1P into plasma, but not into other serum-free media, indicating that S1P release was controlled by a plasma factor. Erythrocytes did not generate S1P since an increase in plasma S1P levels was always accompanied by a decrease in cellular S1P levels. Thrombocytes that were reported to generate and release S1P after activation did not contribute to the observed S1P release in blood. The amount of erythrocytes as well as the proportion of plasma in the medium determined the magnitude of S1P release. Adoptively transferred S1P-loaded and unloaded mouse erythrocytes displayed a normal life span and similar S1P levels 24 h after recovery, indicating that S1P incorporation and release are dynamically regulated in vivo.