Computerized screening for cognitive impairment in patients with COPD 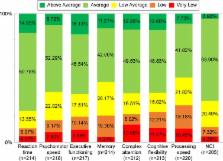 COPD is associated with cognitive impairment. These impairments should be diagnosed, but due to time- and budget-reasons, they are often not investigated. The aim of this study is to examine the viability of a brief computerized cognitive test battery, Central Nervous System Vital Signs (CNSVS), in COPD patients.

CNSVS was fully completed by 205 (93.2%, 105 females, 100 males) of the total group of patients (n=220, 116 females, 104 males). Z-tests showed that COPD patients performed significantly worse than the norms on all CNSVS cognitive domains. Slightly more than half of the patients (51.8%) had impaired functioning on 1 or more cognitive domains. Patients without computer experience performed significantly worse on CNSVS than patients using the computer frequently.

The completion rate of CNSVS was high and cognitive dysfunctions measured with this screening were similar to the results found in prior research, including paper and pen cognitive tests. These results support the viability of this brief computerized cognitive screening in COPD patients, that may lead to better care for these patients. Cognitive performance of patients with little computer experience should be interpreted carefully. Future research on this issue is needed.

Liam Johnson,  C Thomas Gualtieri (2006)
CNS Vital Signs (CNSVS) is a computerized neurocognitive test battery that was developed as a routine clinical screening instrument. It is comprised of seven tests: verbal and visual memory, finger tapping, symbol digit coding, the Stroop Test, a test of shifting attention and the continuous performance test. Because CNSVS is a battery of well-known neuropsychological tests, one should expect its psychometric properties to resemble those of the conventional tests upon which it is based. 1069 subjects age 7-90 participated in the normative database for CNSVS. Test-retest reliability (TRT) was evaluated in 99 Ss who took the battery on two separate occasions, separated, on the average, by 62 days; the results were comparable to those achieved by equivalent conventional and computerized tests. Concurrent validity studies in 180 subjects, normals and neuropsychiatric patients, indicate correlations that are comparable to the concurrent validity of similar tests. Discriminant validity is supported by studies of patients with mild cognitive impairment and dementia, post-concussion syndrome and severe traumatic brain injury, ADHD (treated and untreated) and depression (treated and untreated). The tests in CNSVS are also sensitive to malingerers and patients with conversion disorders. The psychometric characteristics of the tests in the CNSVS battery are very similar to the characteristics of the conventional neuropsychological tests upon which they are based. CNSVS is suitable for use as a screening instrument, or as a serial assessment measure. But it is not a substitute for formal neuropsychological testing, it is not diagnostic, and it will have only a limited role in the medical setting, absent the active participation of consulting neuropsychologists.