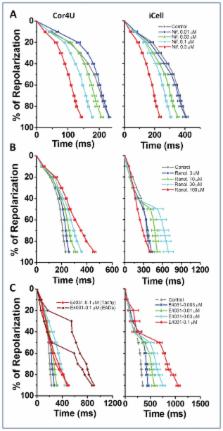 Hani Sabbah,  A I Undrovinas,  Luiz Belardinelli (2006)
Ventricular repolarization and contractile function are frequently abnormal in ventricular myocytes from human failing hearts as well as canine hearts with experimentally induced heart failure (HF). These abnormalities have been attributed to dysfunction involving various steps of the excitation-contraction coupling process, leading to impaired intracellular sodium and calcium homeostasis. We previously reported that the slow inactivating component of the Na(+) current (late I(Na)) is augmented in myocytes from failing hearts, and this appears to play a significant role in abnormal ventricular myocytes repolarization and function. We tested the effect of ranolazine, a novel drug being developed to treat angina, on (1) action potential duration (APD), (2) peak transient and late I(Na) (I(NaT) and I(NaL), respectively), (3) early afterdepolarizations (EADs), and (4) twitch contraction (TC), including after contractions and contracture. Myocytes were isolated from the left ventricle of normal dogs and of dogs with chronic HF caused by multiple sequential intracoronary micro-embolizations. I(NaT) and I(NaL) were recorded using conventional whole-cell patch-clamp techniques. APs were recorded using the beta-escin perforated patch-clamp configuration at frequencies of 0.25 and 0.5 Hz. TCs were recorded using an edge movement detector at stimulation frequencies ranging from 0.5 to 2.0 Hz. Ranolazine significantly (P<0.05) and reversibly shortened the APD of myocytes stimulated at either 0.5 or 0.25 Hz in a concentration-dependent manner. At a stimulation frequency of 0.5 Hz, 5, 10, and 20 microM ranolazine shortened the APD(90) (APD measured at 90% repolarization) from 516+/-51 to 304+/-22, 212+/-34 and 160+/-11 ms, respectively, and markedly decreased beat-to-beat variability of APD(90), EADs, and dispersion of APDs. Ranolazine preferentially blocked I(NaL) relative to I(NaT) in a state-dependent manner, with a approximately 38-fold greater potency against I(NaL) to produce tonic block (IC(50)=6.5 microM) than I(NaT) (IC(50)=294 microM). When we evaluated inactivated state blockade of I(NaL) from the steady-state inactivation mid-potential shift using a theoretical model, ranolazine was found to bind more tightly to the inactivated state than the resting state of the sodium channel underlying I(NaL), with apparent dissociation constants K(dr)=7.47 microM and K(di)=1.71 microM, respectively. TCs of myocytes stimulated at 0.5 Hz were characterized by an initial spike followed by a dome-like after contraction, which was observed in 75% of myocytes from failing hearts and coincided with the long AP plateau and EADs. Ranolazine at 5 and 10 microM reversibly shortened the duration of TCs and abolished the after contraction. When the rate of myocyte stimulation was increased from 1.0 to 2.0 Hz, there was a progressive increase in diastolic "tension," that is, contracture. Ranolazine at 5 and 10 microM reversibly prevented this frequency-dependent contracture.

Shengde Peng,  Antonio E Lacerda,  Glenn E. Kirsch … (2010)
The cardiac action potential (CAP) of stem cell-derived human cardiomyocytes (SC-hCMs) is potentially the most powerful preclinical biomarker for cardiac safety and efficacy in humans. Our experiments tested this hypothesis by examining the CAP and relevant pharmacology of these cells. The electrophysiological and pharmacological profiles of SC-hCMs were compared to rabbit and canine Purkinje fibers (PFs). Ventricular SC-hCMs provided the dominant electrophysiological phenotype (approximately 82%) in a population of ventricular, atrial and nodal cardiomyocytes (CMs). The effects of reference compounds were measured in SC-hCMs using perforated patch, current clamp recording. Selective inhibitors of I(Kr), I(Ks), I(Ca,L), and I(Na), and norepinephrine (NE), were tested on SC-hCM action potentials (APs). AP prolongation was observed upon exposure to hERG channel blockers (terfenadine, quinidine, cisapride, sotalol, E-4031 and verapamil), with significantly shorter latencies than in PF assays. For the torsadogenic compounds, terfenadine and quinidine, SC-hCM AP prolongation occurred at significantly lower concentrations than in canine or rabbit PF APs. Moreover, the I(Ks) blocker chromanol 293B prolonged APs from SC-hCMs, whereas both rabbit and canine PF assays are insensitive to I(Ks) blockers in the absence of adrenergic preconditioning. Early afterdepolarizations (EADs) were induced by 100 nM E-4031 and 100 nM cisapride in the SC-hCM assay, but not in the canine or rabbit PF assay. Selective inhibition of I(Na) and I(Ca,L) slowed V(max) and shortened AP duration, respectively. NE prolonged the AP duration of SC-hCMs. The CAP of SC-hCMs has been validated as a powerful preclinical biomarker for cardiac safety and efficacy. In addition to its human nature, the SC-hCM AP assay removes diffusion delays, reduces test compound consumption, demonstrates an overall pharmacological sensitivity that is greater than conventional rabbit or canine PF assays, and accurately predicts cardiac risk of known torsadogenic compounds. 2010 Elsevier Inc. All rights reserved.

Antagonism by ranolazine of the pro-arrhythmic effects of increasing late INa in guinea pig ventricular myocytes.

Fe-Lin Wu,  John C Shryock,  H. Y. Song … (2004)
The new anti-anginal drug ranolazine causes a slight ( 1 seconds, and caused early afterdepolarizations; both actions were attenuated by ranolazine (0.1-30 micromol/L). Ranolazine (10 micromol/L) reduced by 89% the 13.6-fold increase in variability of APD caused by 10 nmol/L ATX-II. The effects of ATX-II (3 nmol/L) in combinations with either the IKr blocker E-4031 or the IKs blocker chromanol 293B to increase APD were attenuated 76 +/- 5% and 71 +/- 4%, respectively, by 10 micromol/L ranolazine. The results demonstrate that ranolazine reduces late INa and has an anti-arrhythmic effect when late INa is increased.