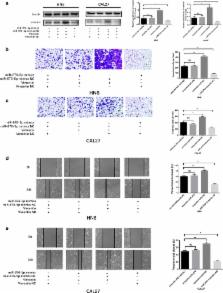 Local or distant metastasis remains the main course of death in head and neck squamous cell carcinoma (HNSCC) patients. MicroRNAs (miRNAs) have been implicated in metastasis of HNSCC, but the mechanisms of their action are mainly undocumented. Through public head and neck cancer miRNA expression datasets, we found that miR-876-5p was a novel potential tumor suppressor targeting HNSCC metastasis.

Clinical significance and mechanism of miR-876-5P was systematically analyzed in HNSCC. Quantitative RT-PCR was used to evaluate miR-876-5p levels in HNSCC cell lines and in 20 pairs of HNSCC with associated regional nodal metastases and HNSCC without metastatic primary tumors. Scratch and invasion assays were evaluated to determine the role of miR-876-5p in the regulation of HNSCC cell migration and invasion, respectively. Western blotting was used to investigate the mechanism by which miR-876-5p suppresses HNSCC cell invasion and migration. Luciferase assays were performed to assess miR-876-5p binding to the vimentin gene. The animal model was used to support the in vitro experimental findings.

miR-876-5p, which functions as a tumor suppressor in HNSCC, inhibits metastasis by targeting vimentin and provides a novel therapeutic target for HNSCC treatment.

Rachel A. Ridgway,  Valerie G. Brunton,  Andrew Lowy … (2010)
TP53 mutation occurs in 50-75% of human pancreatic ductal adenocarcinomas (PDAC) following an initiating activating mutation in the KRAS gene. These p53 mutations frequently result in expression of a stable protein, p53(R175H), rather than complete loss of protein expression. In this study we elucidate the functions of mutant p53 (Trp53(R172H)), compared to knockout p53 (Trp53(fl)), in a mouse model of PDAC. First we find that although Kras(G12D) is one of the major oncogenic drivers of PDAC, most Kras(G12D)-expressing pancreatic cells are selectively lost from the tissue, and those that remain form premalignant lesions. Loss, or mutation, of Trp53 allows retention of the Kras(G12D)-expressing cells and drives rapid progression of these premalignant lesions to PDAC. This progression is consistent with failed growth arrest and/or senescence of premalignant lesions, since a mutant of p53, p53(R172P), which can still induce p21 and cell cycle arrest, is resistant to PDAC formation. Second, we find that despite similar kinetics of primary tumor formation, mutant p53(R172H), as compared with genetic loss of p53, specifically promotes metastasis. Moreover, only mutant p53(R172H)-expressing tumor cells exhibit invasive activity in an in vitro assay. Importantly, in human PDAC, p53 accumulation significantly correlates with lymph node metastasis. In summary, by using 'knock-in' mutations of Trp53 we have identified two critical acquired functions of a stably expressed mutant form of p53 that drive PDAC; first, an escape from Kras(G12D)-induced senescence/growth arrest and second, the promotion of metastasis.

Angela Hui,  Melania Pintilie,  John Waldron … (2010)
The objective of this study is to investigate the significance of microRNAs (miRNA) in patients with locally advanced head and neck squamous cell carcinoma (HNSCC). A global miRNA profiling was done on 51 formalin-fixed archival HNSCC samples using quantitative reverse transcription-PCR approach, correlated with patients' clinical parameters. Functional characterization of HNSCC-associated miRNAs was conducted on three HNSCC cell lines. Cell viability and proliferation were investigated using MTS and clonogenic assays, respectively; cell cycle analyses were assessed using flow cytometry. Thirty-eight of the 117 (33%) consistently detected miRNAs were significantly differentially expressed between malignant versus normal tissues. Concordant with previous reports, overexpression of miR-21, miR-155, let-7i, and miR-142-3p and underexpression of miR-125b and miR-375 were detected. Upregulation of miR-423, miR-106b, miR-20a, and miR-16 as well as downregulation of miR-10a were newly observed. Exogenous overexpression of miR-375 in HNSCC cell lines reduced proliferation and clonogenicity and increased cells in sub-G(1). Similar cellular effects were observed in knockdown studies of the miR-106b-25 cluster but with accumulation of cells in G(1) arrest. No major difference was detected in miRNA profiles among laryngeal, oropharyngeal, or hypopharyngeal cancers. miR-451 was found to be the only significantly overexpressed miRNA by 4.7-fold between nonrelapsed and relapsed patients. We have identified a group of aberrantly expressed miRNAs in HNSCC and showed that underexpression of miR-375 and overexpression of miR-106b-25 cluster might play oncogenic roles in this disease. Further detailed examinations of miRNAs will provide opportunities to dissect the complex molecular abnormalities driving HNSCC progression.

MicroRNA-30a inhibits cell migration and invasion by downregulating vimentin expression and is a potential prognostic marker in breast cancer.

Jeak Ding,  Yan-Wei Wang,  Ying-Jui Chao … (2012)
Tumor recurrence and metastasis result in an unfavorable prognosis for cancer patients. Recent studies have suggested that specific microRNAs (miRNAs) may play important roles in the development of cancer cells. However, prognostic markers and the outcome prediction of the miRNA signature in breast cancer patients have not been comprehensively assessed. The aim of this study was to identify miRNA biomarkers relating to clinicopathological features and outcome of breast cancer. A miRNA microarray analysis was performed on breast tumors of different lymph node metastasis status and with different progression signatures, indicated by overexpression of cyclin D1 and β-catenin genes, to identify miRNAs showing a significant difference in expression. The functional interaction between the candidate miRNA, miR-30a, and the target gene, Vim, which codes for vimentin, a protein involved in epithelial-mesenchymal transition, was examined using the luciferase reporter assay, western blotting, and migration and invasion assays. The association between the decreased miR-30a levels and breast cancer progression was examined in a survival analysis. miR-30a negatively regulated vimentin expression by binding to the 3'-untranslated region of Vim. Overexpression of miR-30a suppressed the migration and invasiveness phenotypes of breast cancer cell lines. Moreover, reduced tumor expression of miR-30a in breast cancer patients was associated with an unfavorable outcome, including late tumor stage, lymph node metastasis, and worse progression (mortality and recurrence) (p < 0.05). In conclusion, these findings suggest a role for miR-30a in inhibiting breast tumor invasiveness and metastasis. The finding that miR-30a downmodulates vimentin expression might provide a therapeutic target for the treatment of breast cancer.