Pulmonary barotrauma in COVID-19: A systematic review and meta-analysis 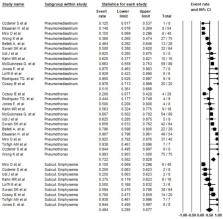 An ever-increasing number of studies have reported an increased incidence of spontaneous pulmonary barotrauma such as pneumothorax, pneumomediastinum, and subcutaneous emphysema in patients with COVID-19. We conducted this systematic review and meta-analysis to assess the value and significance of the available data.

A thorough systematic search was conducted to identify studies of barotrauma in hospitalized patients with COVID-19. Data analysis of case reports was done using a statistical package for the social sciences (SPSS) version 22, and meta-analysis was performed using CMA-3.

We identified a total of 4488 studies after thorough database searching.118 case reports and series, and 15 observational studies were included in the qualitative analysis. Fifteen studies were included in the quantitative analysis. The observational studies reported barotrauma in 4.2% (2.4–7.3%) among hospitalized patients; 15.6% (11–21.8%) among critically ill patients; and 18.4% (13–25.3%) in patients receiving invasive mechanical ventilation, showing a linear relationship of barotrauma with the severity of the disease. In addition, barotrauma was associated with a longer length of hospital stay, more extended ICU stay, and higher in-hospital mortality. Also, a slightly higher odds of barotrauma was seen in COVID-19 ARDS compared with non-COVID-19 ARDS.

COVID-19 pneumonia is associated with a higher incidence of barotrauma. It presents unique challenges for invasive and non-invasive ventilation management. Further studies are required to unravel the underlying pathophysiology and develop safer management strategies.

AMSTAR 2: a critical appraisal tool for systematic reviews that include randomised or non-randomised studies of healthcare interventions, or both

The PRISMA 2020 statement: An updated guideline for reporting systematic reviews

Matthew J L Page, Joanne E. Mckenzie, Patrick Bossuyt … (2021)
The Preferred Reporting Items for Systematic reviews and Meta-Analyses (PRISMA) statement, published in 2009, was designed to help systematic reviewers transparently report why the review was done, what the authors did, and what they found. Over the past decade, advances in systematic review methodology and terminology have necessitated an update to the guideline. The PRISMA 2020 statement replaces the 2009 statement and includes new reporting guidance that reflects advances in methods to identify, select, appraise, and synthesise studies. The structure and presentation of the items have been modified to facilitate implementation. In this article, we present the PRISMA 2020 27-item checklist, an expanded checklist that details reporting recommendations for each item, the PRISMA 2020 abstract checklist, and the revised flow diagrams for original and updated reviews.

Clinical features and short-term outcomes of 144 patients with SARS in the greater Toronto area.

Christopher Booth, Larissa M. Matukas, George Tomlinson … (2003)
Severe acute respiratory syndrome (SARS) is an emerging infectious disease that first manifested in humans in China in November 2002 and has subsequently spread worldwide. To describe the clinical characteristics and short-term outcomes of SARS in the first large group of patients in North America; to describe how these patients were treated and the variables associated with poor outcome. Retrospective case series involving 144 adult patients admitted to 10 academic and community hospitals in the greater Toronto, Ontario, area between March 7 and April 10, 2003, with a diagnosis of suspected or probable SARS. Patients were included if they had fever, a known exposure to SARS, and respiratory symptoms or infiltrates observed on chest radiograph. Patients were excluded if an alternative diagnosis was determined. Location of exposure to SARS; features of the history, physical examination, and laboratory tests at admission to the hospital; and 21-day outcomes such as death or intensive care unit (ICU) admission with or without mechanical ventilation. Of the 144 patients, 111 (77%) were exposed to SARS in the hospital setting. Features of the clinical examination most commonly found in these patients at admission were self-reported fever (99%), documented elevated temperature (85%), nonproductive cough (69%), myalgia (49%), and dyspnea (42%). Common laboratory features included elevated lactate dehydrogenase (87%), hypocalcemia (60%), and lymphopenia (54%). Only 2% of patients had rhinorrhea. A total of 126 patients (88%) were treated with ribavirin, although its use was associated with significant toxicity, including hemolysis (in 76%) and decrease in hemoglobin of 2 g/dL (in 49%). Twenty-nine patients (20%) were admitted to the ICU with or without mechanical ventilation, and 8 patients died (21-day mortality, 6.5%; 95% confidence interval [CI], 1.9%-11.8%). Multivariable analysis showed that the presence of diabetes (relative risk [RR], 3.1; 95% CI, 1.4-7.2; P =.01) or other comorbid conditions (RR, 2.5; 95% CI, 1.1-5.8; P =.03) were independently associated with poor outcome (death, ICU admission, or mechanical ventilation). The majority of cases in the SARS outbreak in the greater Toronto area were related to hospital exposure. In the event that contact history becomes unreliable, several features of the clinical presentation will be useful in raising the suspicion of SARS. Although SARS is associated with significant morbidity and mortality, especially in patients with diabetes or other comorbid conditions, the vast majority (93.5%) of patients in our cohort survived.